I don’t tend to write match previews per se. I usually leave it to the MFW team – we have a rota you know! – to engage with a writer/blogger/podcaster/fan from the opposition of day in a Q&A-type piece that’s rounded off with the MFW prediction table.

It generally works okay (unless it’s Sheffield Utd) and our Kathy has excelled this week, as you’ll discover this evening. But so pivotal does the Birmingham game feel, the thought of doing just a tiny bit of rabble-rousing ahead of this one has been gnawing away all week. So, sorry, but here goes…

Following that humbling afternoon in late August when we were soundly beaten by an annoyingly slick Leeds United, things, it must be said, looked a little grim. Our league record at the time read… played 5, won 1, drawn 1, lost 3, and on the way back to the car, as tradition dictates, I phoned my dad who had not been well enough to attend.

He had followed events via Chris Goreham’s commentary and was not happy (nothing to do with Chris’s fine work by the way). 83-years-old he may be but a more passionate City supporter you’ll be unlikely ever to meet – the fire still burns – and so to have to listen to Mr G describe a proper shellacking was painful.

Being at home on his sofa denied Dad the chance to vocalise his frustration pitchward. He’s good at that. So instead those frustrations were directed at me – with both barrels. As ever, every criticism was preceded by, “I know it’s hard to comment because I wasn’t there but…” There were lots of buts.

So gloomy was his outlook, by the time I’d made it back to the car, I too was having to steer clear of the sharp objects. Despite trying my best to describe how well City had played for the opening 20 minutes, my attempt at plucking out the positive(s) were drowned out by his prophecies of doom and a pending Ipswich-type slide down the table.

[As the season has progressed, I’ve reminded him at regular intervals of that conversation. ?]

What followed that chastening afternoon has been nothing short of incredible, although looking back the signs were there even in those opening five games.

Against tomorrow night’s opponents, on opening day, the balance of the team may not have been quite what it is now but the desire, appetite and ability to conjure up late goals most certainly were, and then against West Brom, a good level of performance was undone with some horrible individual errors.

One week later, at Sheffield Utd, the quality was still there but this time was unpicked by Mo Leitner missing a sitter and Billy Sharp twisting the knife with an injury-time winner. Ironically, seven days later, the first win of the season, against Preston, was borne of possibly the least impressive outing of the lot.

The biggest fear at the time was that, as so often happens in football, a good, consistent level of play eventually gets eroded by poor results and the quality of play ends up aligning itself to points on the board. We’ve all seen it a million times and, in Dad’s eyes, this was happening to us – the second half of the Leeds match was merely confirmation.

Yet, everything changed in that seemingly innocuous midweek trip to Cardiff in the Carabao Cup. Farke chose to ring the changes and ended up putting one over Brexit-lover extraordinaire, Neil Warnock, and in some style. Dennis Sbreny scored twice and a young upstart by the name of Max Aarons added a third. Little did we know at the time, it was the start of something.

What followed that win in South Wales, and kicked off with that attritional 1-1 at Portman Road, has been little short of extraordinary.

The foundations, while not obvious to us at the time, had been laid in 2017/18. The football was tedious, the tempo too slow, but underpinning it was the Farkeball philosophy – a style of football that, to be effective in the Championship, needed three additional elements:

What, as it transpires, it didn’t need was loads of dosh, but instead some brilliant coaching, some astute recruitment and some youngsters who, even though they didn’t necessarily know it, were ready to step up to the first-team.

It also needed belief. Total undiluted belief that the Farke way was the right way – a path that, if followed by everyone from Michael and Delia through to the fans, could transform this club from mid-table fodder into contenders.

And now we ARE contenders.

The festive period was a tough one for all the reasons documented in every City-pointing newspaper and website, but despite slipping from top to third, not one single thing happened to suggest this team is not in this battle for the long haul. Not one.

The fact that virtually everyone outside the Canary Nation is assuming this ‘slide’ to be one that will quickly become a freefall, means there should be no shortage of incentives to make this stick. 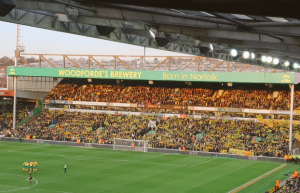 As Anita put so eloquently in her piece on Tuesday, seldom has this place been so vibrant. What started as a flag-waving Barclay has now become an entire stadium with green and yellow scarves held aloft. There’s something in the air.

Defeat, when it occurs, is met with a thunderous chorus of “Yellows…” and a standing ovation, with the players – as humble and grounded as the supporters who adore them – being the figureheads of a project we all feel part of.

It’s that buy-in that has carried us this far – to the precipice of something potentially monumental – and it’s the small gains that have collectively accumulated to propel this club out of the peloton and into the breakaway group.

We scoffed at the pink paint in the away dressing room but there are no doubt many less obvious marginal gains that have been added to more obvious changes, like kicking toward the most vociferous end of the stadium in the second half.

Yet, none of this counts unless what happens on the fields of Colney is transported to the turf of Carrow Road and beyond when crunch time arrives and, supported by all of the above, it is the players who have delivered us one the most exciting seasons imaginable.

The best coaching and game plans in the world are nothing without having a group of players with the footballing nous, intelligence and desire to implement them, and this bunch have been magnificent – from the older heads, like Krul, Tettey, Klose and Rhodes, through to the young bucks of Aarons, Lewis, Godfrey and Cantwell.

To a man they’ve given everything to the cause and even on the days, like against Derby and Stoke, when things have conspired against us, everything has been left out on the pitch. Not once have we, as fans, departed the Carra or an away ground feeling short-changed – something we haven’t been able to say for many seasons. 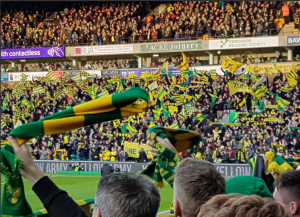 All of which makes it doubly important that we continue to play our part. The ol’ girl is vibrant, colourful and noisy right now and it’s vital she stays that way.

Let’s not be the place where the opposition comes knowing an early goal will quell the crowd. Let’s be that place where they go home thinking, “sh!t, that was noisy!”

For too long there has been a feeling of the players owing us – often after a disheartening, gut-less away-day no-show – but the pendulum has swung and, in this heady era of Farkeball, we now have players who want to be here, who connect with the fans and who always give their all.

The least we can do is feed off this, buy into Stuart Webber’s world of marginal gains, and make a consistently raucous, bouncing Carrow Road another to add to his list. 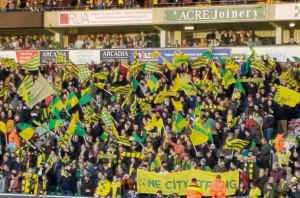 The good folk of Along Come Norwich/Barclay End Norwich have something special planned for Derby Day but starting tomorrow night, let’s all crank it up another notch and give these lads a platform on which they can deliver a much-needed win. And while we’re at it, let’s remind the watching Sky audience that we’re not about to slink off into the shadows like they all want us to.

Birmingham are a decent side who will offer a test, but even minus Mo (and possibly Marco), we have enough to win this game if we do what we’re good at. Many have tried to stop us from playing the way Farke way, but few have succeeded, and even Darren Moore’s collection of prime Premier League muscle couldn’t do it for the full 90+.

It may happen for us this season, it may not, but opportunities like this don’t come along too often and for this particular group of players, this will be the only opportunity.

This feels like a carpe diem moment. Unexpected it may be, but now is our time. That some of the uninitiated continue to question our credentials matters not one jot.

Believe people … because we can do this.