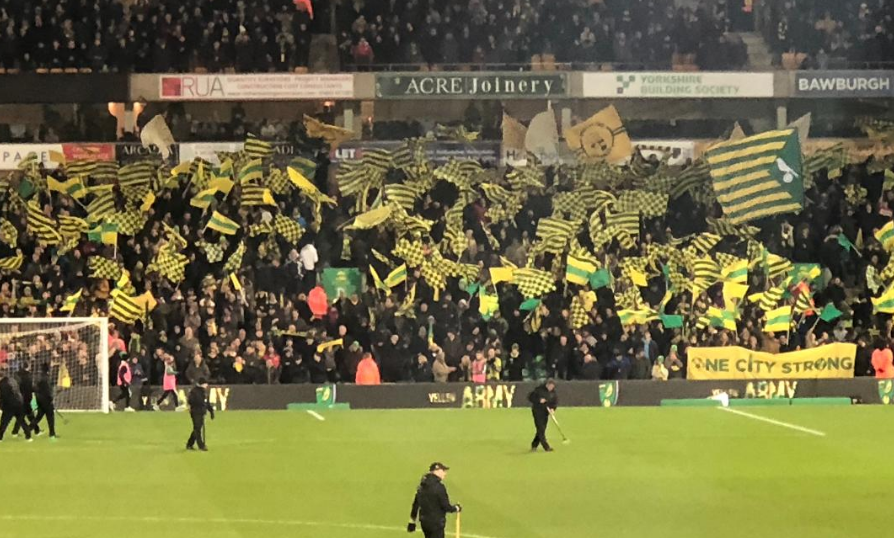 Walking back home from the Carra on Friday night I felt like a dog with two… tails.

I had been privileged to witness one of the most complete performances from a Norwich side in my living memory, which is a long and almost all-inclusive one. Class, more class and class again was the offering from Daniel Farke’s outfit. Superb.

I was actually more impressed with us in the second half than the first, believe it or not. Teemu Pukki’s fine near post move to get on the end of a perfect cross from Jamal Lewis set us on our way. Only to be pegged back by a cracking response from Che Adams who simply blasted it through Tim Krul at his near post. I doubt Captain America could have kept that one out.

But our response was virtually immediate and perfectly executed. We in the Barclay thought that after great work from the impressive Emi Buendia when Mario Vrancic hit that lovely low strike into the far corner, he had slightly scuffed it but the replay on Screeny McScreenface quickly proved us wrong.

And when Tom Trybull was left free to plant Buendia’s corner beyond Lee Camp for the third, us old sages for once thought it was game over – and we were right.

Vrancic and Trybull were crucial to the way we saw out the entire second half. When you consider that Mo Leitner and Alex Tettey were both unavailable it goes to show that the concept of Farkeball is embraced by our entire squad.

A flurry of late Birmingham corners were dealt with admirably and that was that.

Gary G said yesterday that there were a minority of River Enders urging the Yellows to hoof it at times. Not in the Barclay. We appreciated what we were trying to do and thoroughly enjoyed the best 45 minutes of game management we had seen in a long, long time. And those in the River End got to see three excellent goals at close quarters too

The only downside? The oppo are quite literally onto the threat that is Buendia. Kicked out of the game and not for the first time. Four Blues booked and none of ours and if that doesn’t tell you something, nothing does. Here’s hoping it’s a lesser dead leg (if you know what I mean) and he’ll be back to face the lovely Mr Christopher Wilder’s Sheffield United on Saturday.

To counterbalance that, on came Todd Cantwell and he provided our best proactive moment of the second period with a lofted shot that almost caught out Camp – nice bun, Lee. Todd’s gone clean-cut, how about you?

As the clock ticked down, up came the chants of what are often perceived as our Glory Days, by younger supporters anyway. I just can’t get enough, Barking/Snaking up the league and City till I die were prominent. Plus Farkelife and Daniel Farke and his German Army – even my dad as a D-Day vet would have laughed along with that one.

My mate did say “I wish they’d stop fannying around with it” but as the final whistle blew, he had the good grace to admit that said “fannying around” had ultimately proved to be extremely effective.

Game management at its very best.

So Daniel Farke, how do you drop any of those players for the visit of the dreaded Blades?

My suggestion is that you don’t. That eleven did a really professional job.

And we have the luxury of Grant Hanley, Timm Klose, Mo Leitner, Alex Tettey and Louis Thompson all back or close to returning at just the right time. This promotion push could be on, it really could.

Then the debate about do we want to be top six in the Championship or bottom six in the Premier League will open up. We all think differently (luckily) but for me it’s the PL every time.

I’m really going to stick my neck out and repeat my November view that this squad, as it stands, could cut it in the Prem. Not against Man Citeh or the Scousers – both are excellent sides and a million miles away from us – but we should be able to have a tilt at the rest.

As I tend to say, let’s wait and see, although who wasn’t given an extra buzz by events in Stoke and Swansea!

Oh, as I write the gap is back to 35 points and Daniel hasn’t written us an open letter.

He doesn’t need to as anyone who was at the game on Friday will understand.