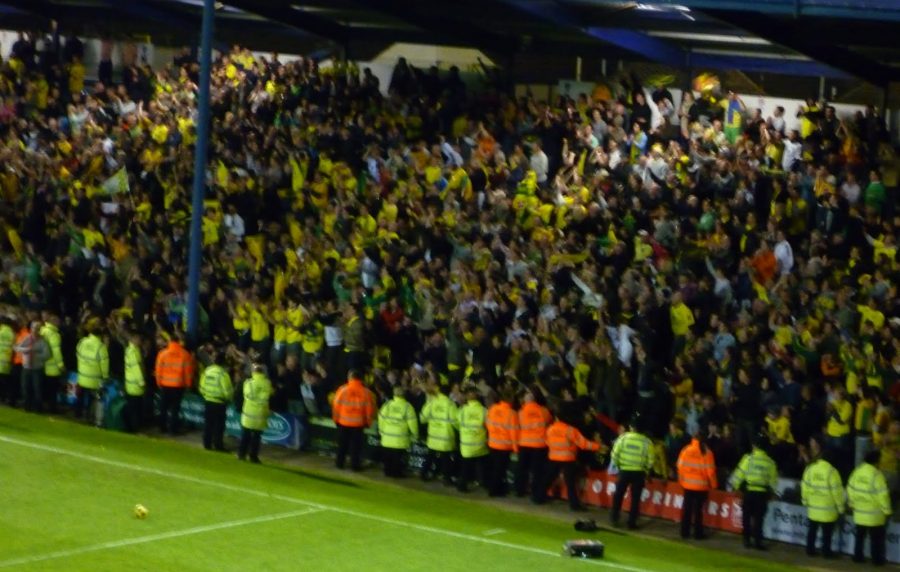 The most dismal week of the 2,340 odd that I have spent caring too much about Norwich City was in 2013, as October became November.

On the Tuesday night, the lovely Mrs Dennis and I watched a 4-0 League Cup defeat at Old Trafford. Four days later we sampled the delights of the M1, M6 Toll and M56 once more to watch Chris Hughton’s team lose 7-0 at Manchester City in the Premier League.

There have been other, seriously wretched occasions, of course. Many of them were more significant milestones in Norwich City’s oscillating journey through the divisions. But, for the feeling of downright, depressing futility, those doleful days four and a bit years ago were my personal nadir.

So what’s the point? Seriously, why are we all getting so excited about where City sit in the Championship?  The Premier League is supposed to be the “promised land” but the promise is of some more soul-crushing misery.

Look at Huddersfield on Sunday. Their promotion — led by a German coach appointed by Stuart Webber — was the model we have copied. Their survival in the top tier last season featured the heroics to which we aspire. But there they were on Sunday, cannon fodder for Manchester City, rock bottom of the Premier League and ten points away from the potential safety of 17th place.

And look at the two clubs currently in the other Premier League relegation places: Fulham and Cardiff. These are the two clubs who were relegated with City in 2014, and while we spent the following season closing in on Wembley, they were making removals firms very rich.

Cardiff got rid of a staggering 44 players in 2014-15 and recruited just 18 replacements. Fulham let 16 players go on free transfers after relegation: decent players including Steve Sidwell, Brede Hangeland and Kieran Richardson departed without a single penny coming in. For both clubs, the single objective in that first season down in the Football League was to get their biggest earners off the payroll.

That’s tough to watch for supporters. And in the two subsequent seasons there were only flirtations with the idea of promotion. It was in season four that both Fulham and Cardiff went up. Cue relieved celebrations by fans. Yet now, eight months on …

Can you imagine what it felt like for Fulham supporters when Harry Winks scored Tottenham’s last gasp winner at Craven Cottage on Sunday? Can you think what it was like for Cardiff fans the previous day, seeing Newcastle win to leapfrog above them and out of the bottom three. Even Neil Warnock’s mysterious eyebrows looked distressed.

Of course you can imagine being those fans. You’re a Norwich supporter. You’ve experienced stuff like that many times.

But there are other experiences we’ve all shared, too, following Norwich. Indulge an old codger now as I wallow in a little nostalgia. Let me start with the time I found myself cheering Captain Canary.

That was on a Tuesday night in May 2004. I’d driven to Sunderland on my own, booked into a cheap and not at all cheerful hotel, and was in the stadium waiting to see if City would win the Football League. I could barely contain my stress and so clenched my jaws together (ditto buttocks, if that’s not TMI). Then, long before the players were due to warm-up, Captain Canary waddled out from the tunnel — and I screamed “YESSSSS! Come on!”

In the second half news arrived — probably via somebody’s transistor radio, this was so long ago — that West Brom were losing heavily at Stoke. That meant Nigel Worthington’s City would be champions come what may. So the party started, with about 2,500 Yellows yelling.

City lost 1-0 that night, but it didn’t matter a jot. I delayed my return to my grotty hotel by driving around Sunderland with my NCFC scarf out of the window, hooting my horn: a pathetic but utterly exultant one-man victory parade.

Sadly, 375 days later, on the final day of the 2004-05 season, City slid back to the second tier with an ignominious 6-0 humiliation at Fulham.

Kevin McCarra strained my friendship towards him by writing in the Guardian: “Norwich are unique among the 92 members of the four divisions in their failure to record a single victory outside their own ground. They remained to the death what they have been all season, a popular side equipped for no more than half the job of survival.”

That was the end of our first season in the top division for 10 years. It became City’s last for seven years. And, worse, City slumped into League One.

Then Paul Lambert happened. A two-season crescendo of excitement climaxed at Fratton Park. This time it was a Monday night in May, and the only particularly embarrassing thing I did was to dance an arms-linked jig of joy with total strangers in the Gents at the away end.

That was followed by not one, but three seasons in the Premier League. They ended, effectively, at blooming Fulham in May 2014 when the only winnable game left to us featured a flaccidly impotent afternoon for Ricky van Wolfswinkel.

It hurt. But one year later there was unforgettable Wembley glory as Alex Neil’s vibrant team beat boastful Middlesbrough before they knew what was happening.

Oh, but Neil’s tilt at the Premier League yielded just nine wins. There were very few occasions that season when any of us felt like cheering a bloke dressed up like a fat, yellow bird.

Here’s the thing, though: that completely crazy but profoundly purgative roar of delight at seeing Captain flaming Canary at the Stadium of Light in 2004 was only so brilliantly cathartic because it was proceeded by so many grim disappointments.

Dancing in the bog at Portsmouth in 2011 was pay-back for trudging home in a black funk from Charlton in 2009 as City crashed into League One. And being with my family — and being part of the Norwich City family — at Wembley in May 2015 was so life-affirming because the City faithful had been just that: faithful through some oppressively dark days.

So my personal credo is that the whole point of supporting a football club is the tribal sense of belonging — of being part of a community — which is forged in adversity as much as it is in triumph.

Families fall out, of course. But at the moment we’re all united by being City. And I happen to believe that we’ll be OK this time if we get into the Premier League.

We shouldn’t forget that the young academy players currently strutting their stuff in our first team were spotted, signed and nurtured by people, many of whom are no longer at the club. And they rose through a system put in place by a chief executive who has also left. Without David McNally we would not have a category one academy.

But the courage to blood the kids and to keep them in the team — the belief that pitched Max Aarons into a Championship debut at Portman Road, for instance — is part of a philosophy which has been constructed by Webber and Daniel Farke and which fits hand in hand with a very impressive recruitment record.

Study the current side — stuffed with men like Emi Buendia, Mo Leitner and Marco Stiepermann — and acknowledge that the scouting and signing protocols have been revolutionised.

A third ingredient of the philosophy is the style of play. At the Birmingham game, a guy who sits near my wife and me shouted: “Get rid of it!”  It was the dying bellow of a lone dinosaur.

My shouted answer was: “No! Keep it”.

Taking care of the football will serve us well in the top division, I am sure. But we’ve got to get there first. And the next couple of weeks are as important as any in the 2,340 I have endured.

What’s the point of caring so much at the moment? The point is, as fans, we’ve had a thin diet since Wembley and now there’s another feast in sight.

I’ve had enough adversity. I want my share of triumph, please. I feel like I did that night in the Stadium of Light. We can do this. We can flipping do this. YESSSS! Come on!