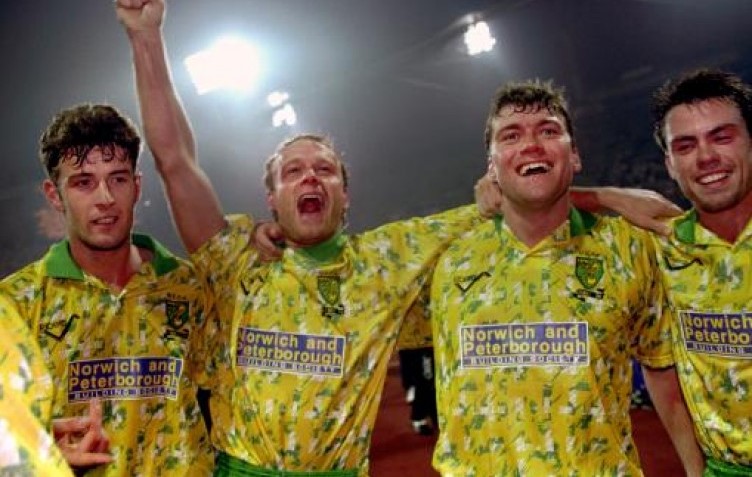 As regular readers will recall, I sometimes like to start articles with a trivia question related to something I’m going to discuss.

Today’s is this: of the 22 clubs in the inaugural Premier League (1992-93), how many are still in the PL today? As a secondary: are any of them no longer in either of the top two divisions?

What made me think of that season was Mick Dennis’s fine article earlier this week, capturing some of the ups-and-downs of that special and intense experience of being a Norwich City fan. It was a great article, enhanced by the comments it inspired.

You may be thinking “yes, but I don’t remember anything about 1992-93 in there”.  And you’d be right. It’s probably because Mike Walker’s time didn’t involve a promotion or relegation.

But surely it should feature in our warmest memories of following City – and with a particular relevance to the current City side.

It’s pretty remarkable to think that we finished third in the Premier League that season. Even more remarkable, there was still a genuine chance quite late in the season that we’d win it.

It was an incredibly exciting time, and not just because we were successful. It was the way we played: positive, creative football that you couldn’t help but be proud of.

I don’t know whether Daniel Farke will win anything with Norwich. Perhaps he won’t feature at all in an equivalent of Mick’s piece 20 years from now. But I’ll always be grateful he’s brought back that excitement and pride.

Walker’s side had some outstanding talent like Chris Sutton, but it wasn’t a team of stars. Like Farke’s team of today, it was a close-knit group that believed in each other and in the manager’s philosophy. It was a joy to watch.

With the possible exception of Swansea, no Championship club made a bigger cost saving in its playing budget this summer than Norwich. In that context, to be playing as we are and challenging for automatic promotion is one of great achievements of Norwich City in my lifetime.

I’ll give the trivia answers at the end, but for now please bear with me while I change subject. (I should engineer a smooth link, of course, but I’m sadly not that skilled a writer.)

I used to think the solution to wrong decisions was to have more officials on the field. That theory was dented by the apparent ineffectiveness of extra officials in the Champions League – and comprehensively blown to pieces on Sunday night.

Some of you will know I’m talking about the Divisional Championship games in the NFL (in effect, semi-finals for the Superbowl). With plenty of officials on the field, both games were decided by bad decisions – in the case of the LA Rams and New Orleans Saints, one so blatantly wrong that there are calls for the League Commissioner to intervene and order the game to be replayed.

There is technology available in the NFL, of course, and scope for teams to challenge decisions. But the usage of those things is limited, and – extraordinarily – doesn’t include the pivotal situation at the end of that game.

For us, of course, the issue is VAR.

Yes, it’s still cumbersome as it develops; it doesn’t correct every wrong call, and makes some pretty marginal ones itself. But it DOES put right evident injustices.

Clubs in the Premier League have been robbed of vital points this season by wrong decisions. I’m sympathetic to them if they voted to have VAR; not if they were among the majority who voted against it.

There are some genuine arguments against VAR – but also some spurious ones. I was told that officials opposed it because it would reduce their authority and credibility. Well, it’s done the opposite in tennis, cricket and rugby.

OK, dismounting from my hobbyhorse.

How many of the teams in the inaugural Premier League of 1992-93 are still there today? Nine out of 22. Of the remaining 13, three aren’t even in the Championship (Wimbledon, Oldham and Coventry). That may shortly be four, of course…

Tonight is our AGM, free to non-members to attend where we shall be sharing some historic news and also have a Q&A with Zoe Ward and Neil Adams hosted by Dave Freezer.

Q&A begins at 7:30pm in the Top of the City in the Jarrold Stand.

🟢🟡 The more you see, the more you have to like the cut of Mr Gibbs #baller

Regarding Liam Gibbs starting v Hull, I've always said if a player is good enough they're old enough to start games, this has been the clubs philosophy recently so I hope Smith continues with it #ncfc

I don't see it, but going on what I've seen so far he'd be a bigger miss than I anticipated #ncfc

Said exactly that myself a few days ago. Others saying not sure they could play together ?!
But I’d trust Deano & Shaky to find a way 😎
Think with a solid DMF player they can & rip some teams to bits 🤩 Jordan & Pukki will love them 🥰
#NCFC