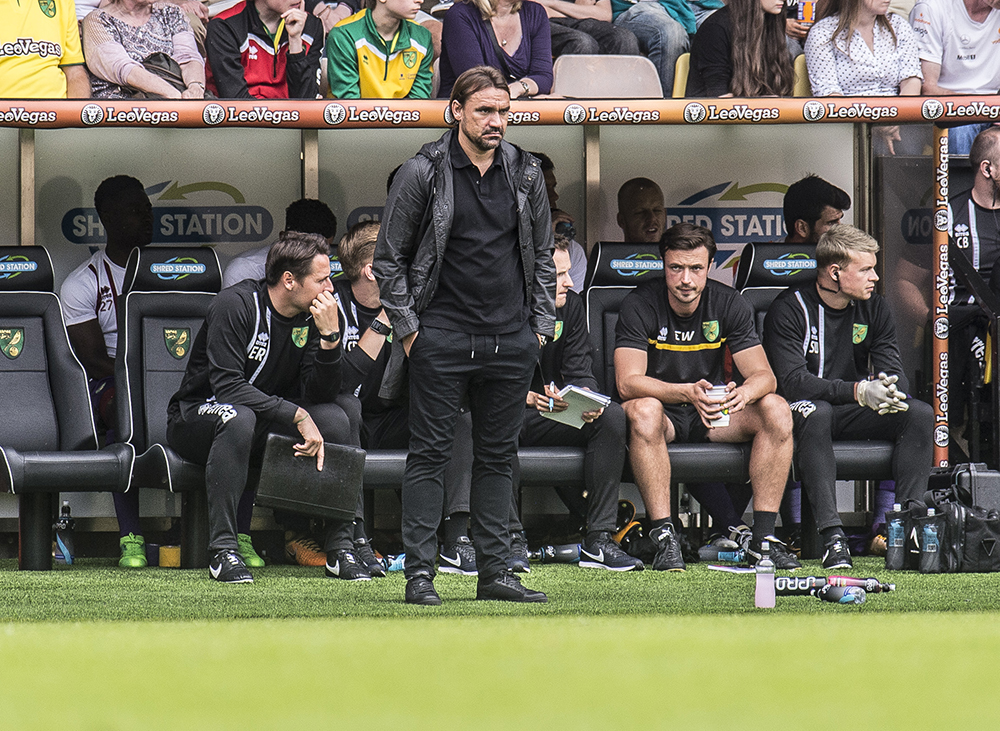 So, which is it – a minor blip or the first manifestation of a tiring squad that’s running out of gas?  I reckon we’ll only know the answer to that one after Bolton, to be honest. A repeat of Wednesday night and I will be starting to worry.

Aw c’mon – we had to lose an away game eventually and if we have to surrender three points to anyone, I would rather it were Alex Neil’s Preston North End than certain other Championship clubs I could mention.

We were sluggish and it was not surprising that we were rather over-run early doors. A pinpoint freebie to the near post converted by Ben Davies and that’s the ghost of Lambert’s revenge: one down after two minutes.

Then Emi Buendia got caught out and brought down his man in the box (or was it actually Jamal Lewis’s man – hard to tell). Emi’s reaction said it all. He knew he’d stuffed up. Paul Gallagher did the rest from the spot. Tim Krul guessed correctly but to no avail as the pen was dispatched with a fair bit of power on it.

Penalties. I’m sick of the thought of them frankly. Daniel Farke said after the match that Marco Stiepermann had been excellent taking them in training but hit it at the perfect height for Declan Rudd to keep it out, which he duly did. I think we’ve converted one from six all season and this is surely an issue that must be addressed. Enough already.

Tetbull is rapidly becoming a thing of the past. I cannot wait for Mo Leitner’s imminent return and the unfortunate injury to Mario Vrancic is hardly helping us just now.

That being said, Trybull was hooked at half time and we’d already gone to three at the back, which involved Max Aarons switching from right to left and Lewis joining Christoph Zimmermann and Ben Godfrey as part of the triumvirate. We gave it a go and our possession count increased, but it was all to no real avail.

We had enough shots though – around 20 – and Rudd played a blinder.

There was an element of farce about Preston’s third when a 35-metre effort crashed off Tim Krul’s bar and fell to Sean Maguire inside the box. Whack. Game well and truly over.

We continued to create chances and marginally had the better of the second half. Timmu Pukki’s consolation was just that – a consolation.

A short journey to the Macron of course.

I don’t really have a lot of time for folks who moan about the pampered lives of professional footballers. Disregarding the likes of Rooney, Balotelli or, say, Suarez, these guys are generally worthy of respect. However, they cannot function correctly unless the old petrol tank is full.

We had the physical and emotional baggage of Leeds and Ipswich to carry up to Deepdale, no Vrancic or Leitner and a day’s less rest than what seemed to me to be a very useful Preston side.

Back in the day me, Ady and Bob would occasionally play for our different league sides on a Sunday morning and then turn out on Hackney Marshes that same afternoon. But in our day and at our level we could – even though me and Ady were a bit static on the Marshes, although Bob coped pretty well.

But we were carthorses while modern professionals are thoroughbreds. Worlds apart.

I won’t launch into a rant about the fixture computer or the influence of Sky or BT Sport in switching kick-off times – and even matchdays – to suit themselves but this particular week we have been dealt a very poor hand indeed. Not because we lost at Preston but I’m sure readers will know what I’m getting at.

Now I’m no fan of Northern Soul but the one thing we must do from now on is to adopt their mantra: Keep the Faith.

It’s the least we can do for Farke & Co.

These guys have already provided us some great entertainment during an exhilarating season and one away defeat in 14 games is like the swallow and the summer.

Wins for the Wildermen and Leeds on Wednesday didn’t much help of course.

Whatever your mood was on Valentine’s morning (mine was pretty gloomy):