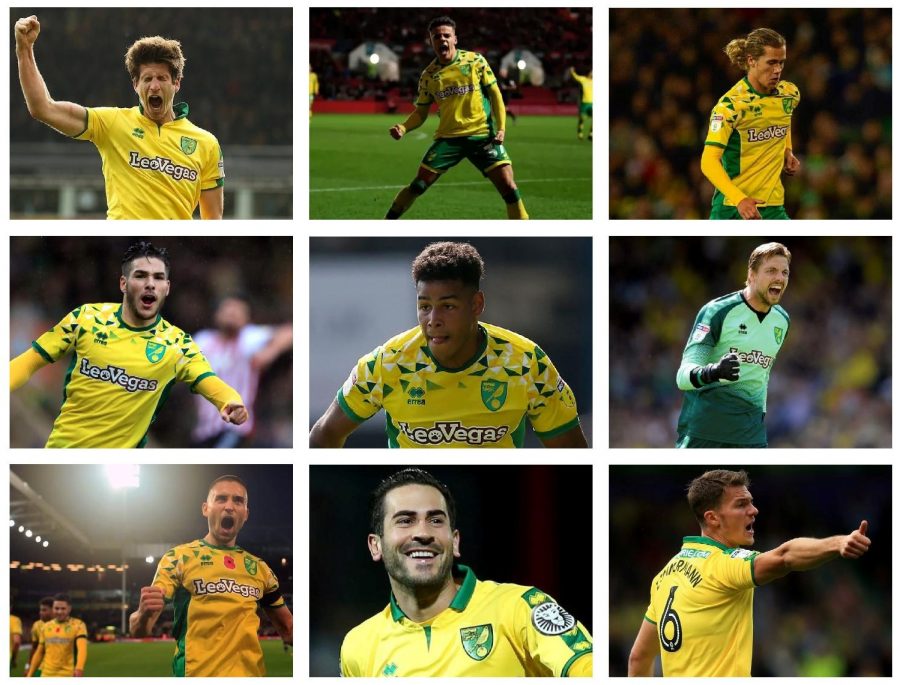 We can all agree this season has surpassed any realistic expectations, particularly when we consider the significant influx of new players, as the changing of the guard continued and more youth team members were promoted.

It’s something, as Stuart Webber stated a few times, which was always likely to take a few windows to sort out and will only be complete come the beginning of next season. That’s the first time I’d say the entire squad will be Daniel Farke’s and any deadwood/problem children from previous regimes removed.

That makes what’s happened this season all the more remarkable.

Three things have pleased me most of all:

Firstly, the Farke style now has the necessary personnel for it to fulfil its full potential. I’ve heard lots say Farke changed his philosophy, mostly from those who wanted him out now having large amounts of egg on their faces, but I don’t think this is accurate.

If you look closely and listen to what Webber stated at the excellent Norwich City Fans Social Club Fans’ Forum it is all about Farke getting the right players who understand what he wants and puts what they’ve been practising all week in training onto the pitch. [By the way, the Fans’ Forum with Daniel Farke next Wednesday (20th February) should be a cracker too!]

It must have been frustrating for Farke to work on tactics all week only to have Nelson Oliveira never getting into the box as he wanted to score another 30-yarder, or Josh Murphy staying wide instead of getting in the box. Those two alone meant attacks would often break down and we’d have to start again.

Farke’s biggest wish was for players that wanted to get into the box, so his midfielders could pick out the right pass to hurt the opposition. In Teemu Pukki, Jordan Rhodes, Onel Hernandez and Emi Buendia we now have that and the difference for players like Mo Leitner, Mario Vrancic and Marco Stiepermann, who all can play killer through balls, is the like chalk and cheese.

Secondly, the amount of youth players promoted over senior pros and keeping their places when doing well is a credit to all involved and will be crucial to our continued self-sustainability; the most notable being Max Aarons, Jamal Lewis, Ben Godfrey and Todd Cantwell. although I have a feeling Alfie Payne won’t be far behind.

And thirdly, is how players who have come in, when players were sold in the summer or injuries have occurred during the season, have either maintained the high standards or, in a lot of cases, out-performed their predecessors. The most notable cases here are Stiepermann for James Maddison, Hernandez for Murphy, Buendia for anyone you like, Christoph Zimmermann for Grant Hanley, Ben Godfrey for Timm Klose, Vrancic for Leitner and Alex Tettey for Tom Trybull.

This got me thinking as to what our best first team starting eleven for the current 2018/19 squad would be.

After much deliberation I decided upon the following, using our most used formation of 4-2-3-1: 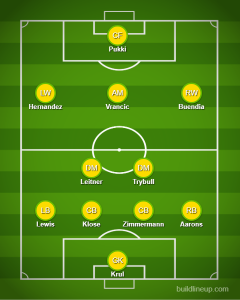 There are some sho0-ins in goal, at fullback, the two wide attacking midfielders and up front, but the rest is really difficult and as that’s largely the spine of the team that’s really interesting.

I found it really difficult to drop one of Klose, Zimmermann or Godfrey and one of Stiepermann, Leitner or Vrancic. Picking between Tettey and Trybull is not so easy either!

It also has to be said Rhodes has been superb from the bench on numerous occasions too.

I mean the “B-team” I was left with is pretty decent too: 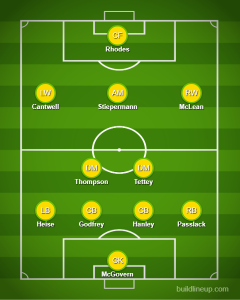 When you think this squad has been built on a significant transfer surplus, it makes it even more remarkable. Huge credit must go to Webber and Farke, but also to the board for having the foresight and nous to put the set-up in place and get the right people.

I found picking my best starting eleven really interesting, so thought it would be an interesting exercise to put a survey together to get the opinions in of all you fantastic MFW readers.

We’ll announce the results in one week’s time… enjoy.