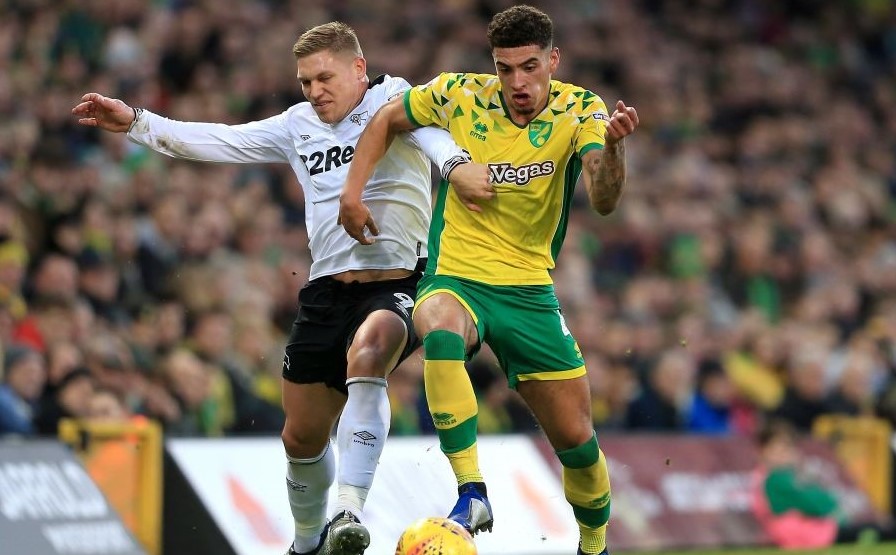 Everyone who has watched City this season will recognise how pivotal the four academy graduates have been in their upsurge.

The fabulous four have performed in a manner unbefitting their age – not only as individuals but also with their collective contribution to the dynamic of the side and how they’ve helped advance Daniel Farke’s footballing philosophy.

In Max Aarons and Jamal Lewis, we possess two of the finest full-backs in the division.

Aarons’ maturity has won him plaudits beyond the Canary Nation, with his exceptional confidence in possession matched with his tactical understanding of his role. When you consider this is his first full season as a professional, the praise has been more than warranted. With his value rising, should Norwich fail to get promoted he may well be one of the first to depart.

In Lewis, City unearthed a quality left-back in a period where they lacked a natural first choice. From his debut against Brentford to now, the development has been incredible. Offensively, he’s improved, contributing more to attacking phases of play, and has added an end product to his already impressive game.

When analysing the four graduates, those two would rank at the top of the list in terms of performances, contributions and importance.

But Todd Cantwell is another and has shone through in adversity.

Considering nobody thought he was a viable loan option last campaign, to have had constant involvement with the first-team is a testament to his graft and willingness to listen. The fact he is a Norfolk lad is often met with celebration. He is living the dream every Norwich supporter.

And then you arrive at Ben Godfrey.

Perhaps, given his role and background, he hasn’t received the compliments of his counterparts. Unlike the other three, his route to the first-team has been lengthy and tinged with frustration, but now City possesses a player fully motivated to retain his starting berth.

Unlike Lewis and Aarons, Godfrey was a known quantity while in the youth ranks. Signed under Alex Neil, Godfrey had impressed at York City in League Two as a central midfielder, where his physicality allowed him to compete in the notoriously robust fourth tier.

City pounced when he declined York’s offer of a professional contract and Godfrey, then 18, joined the Canaries youth ranks as a midfielder. His physicality was a characteristic that Neil highlighted.

Godfrey’s father was a rugby league player and it’s clear his son inherited a muscular frame that has stood him in good stead as his City career has developed.

A few seasons in youth football progressed into a successful loan spell at Shrewsbury Town, with Godfrey complementing Jon Nolan in Paul Hurst’s efficient team. He was deployed as a defensive midfielder where he played a key role in the Salops reaching the Playoff final, where they were beaten by Rotherham United.

Many wondered if Godfrey was ready to take the plunge into the rigours of Championship football prior to his loan spell, but Stuart Webber and Daniel Farke couldn’t guarantee Godfrey the regular first-team football he required, nor could they replicate the education he would get under his belt at New Meadow.

During that spell in League One, in addition to the Playoff Final, Godfrey competed against seasoned operators and also played in an FA Cup tie at the London Stadium against Premier League West Ham.

Education is obviously key to the development of young players, but not just on the technical or tactical side. The ‘emotional’ education aspect is also important, and during that time Godfrey learnt how to respond to different scenarios and manage big occasions while performing in front of lively crowds.

The success of this loan spell caught the attention of City fans, desperate for improvement and reinvigoration after an uninspiring first campaign under Farke.

Links to Premier League clubs surfaced, with his loan spell catching the attention of some scouting networks. Godfrey had reached a tipping point in his development at Norwich, but to have started that process elsewhere could have seen him simply join the football scrap heap.

Comments made by Farke around his deployment as a central defender raised eyebrows, especially given his impact at Shrewsbury, but now, what began as a watching brief has been turned into a string of consistent displays as a tactically adept centre back. After displacing Grant Hanley and Timm Klose, due to injuries, Godfrey has walked through the metaphorical door that Farke often talks of.

But replacing these players as an understudy is one thing – to have two internationals out of the side due to the level of your performances is quite another.

Farke’s comments have been duly rewarded. It’s a mechanical and German way of managing youth prospects. They opt to focus on multiple positions and creating a tactically adept player who understands the philosophy rather than someone who is technically competent but mentally inexperienced.

When City adopt a low block in their defensive shape, Godfrey forms part of a three-man backline, with one of the full-backs or midfielders compensating for the height of the full-backs. His discipline is instrumental in implementing this complex technique and also his understanding of the full-back areas he sometimes needs to adopt.

And from his midfield work, his use of the body is integral along with the technical elements of playing in that position.

His ball-playing ability was adequate in League One but at a higher level, his confidence on the ball is helpful in asserting Norwich’s philosophy. His forward passing into the midfield is key to City’s fluid, overloading attacks. A ball-playing defender who can defend with aggression and is positionally adept is a rare commodity.

His role against the high press will develop with time. His ball-playing ability and confidence in possession allows him to break through the thirds, with his power allowing City to progress up the pitch and breaks the press of opponents.

Add to this tactical nous, instilled by Farke, when he breaks the defensive line and shape to press the opposition attacking midfielder and disrupt the rhythm of opponents.

This transition from central midfield to central defence is for him a natural progression.

His ball-playing tendencies make him a natural partner for Christoph Zimmermann or Hanley who opt for physicality over style. Klose appears his natural replacement, given the likeness between the two in terms of style, yet Godfrey contains more vigour than Klose allowing him to break the press and run through the defensive third to set City on the attack.

His performances have been consistent and pinpointing a single individual mistake since his introduction to the heart of the backline is difficult.

City fans expressed dismay when Farke talked of his potential as a central defender, but the German had a plan that would extract that potential and ability and make a well-rounded player.

He doesn’t play like a 21-year-old in his first season at this level, he plays with heart and passion but also intellect and understanding.

Whether it’s his raw celebrations in the aftermath of goals or the maturity of his performances, this no-nonsense Yorkshireman is proving he has grown up since signing and is now displaying a skill-set for all to see.