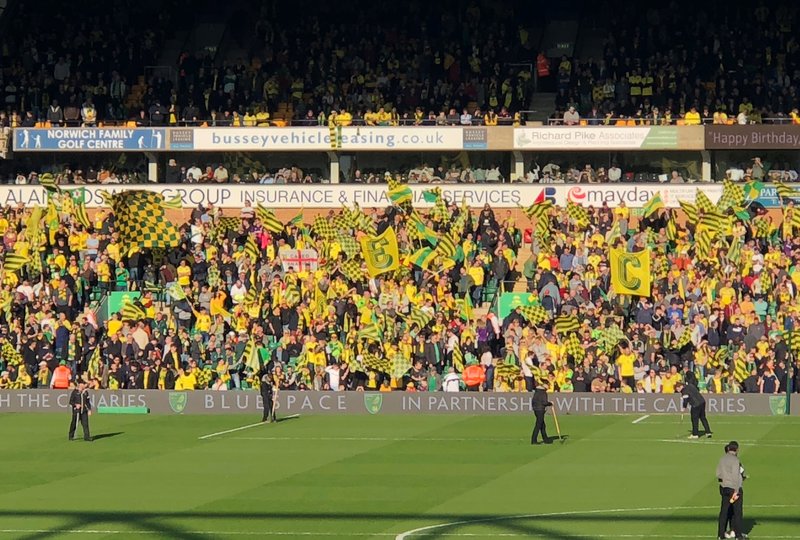 1. expanding and contracting with a rhythmic beat
2. quivering or vibrating
3. exciting
4. varying in intensity, size, or magnitude

At least that’s what the Collins English Dictionary says. I think they’re missing a trick. For nothing, they can have:

In fact, thinking about it, there are several other examples over the season that could also qualify but not too many have matched yesterday’s second-half for its magnitude and the way it quivered, vibrated and excited.

It was telling too how it was celebrated and how those ten minutes after the final whistle resonated more than any other post-match celebration of the season so far. It was a huge win. The players knew it, Team Farke knew it and the Carrow Road crowd knew it.

For Bristol City, it was the end of an unbeaten run that began in late November and which had taken them to within striking distance of the automatic promotion spots. A win yesterday would have meant they were seven points behind us but with two games in hand.

The Robins more than played their part though and a natural by-product of such an incredible run, which included seven consecutive wins, is that they are a side bursting full of confidence. Like our own City, there are few big names but there is a method and a desire that is backed up by an unshakeable belief in how Lee Johnson has set them up.

That they still have to play Sheffield Utd, Leeds, West Brom and Middlesbrough could, in the final countdown, be significant.

All of which makes yesterday’s win that little bit more meaningful and is part of why the hairs on the back of the neck were standing to attention as Daniel Farke did his now-customary tour of Carrow Road before conducting the Barclay’s olé chorus. What a man.

With every passing game, with every passing point and as the days tick away with City on or near the summit, the belief grows. With twelve games to go the time for it all to go totally awry has passed and, whether we like or not or even want it or not, the p-word is as unavoidable as it is tantalisingly close.

Of course, the small matter of having two Yorkshire ‘giants’ breathing down our necks – who incidentally would happily form a tag-team to deny us an automatic – is very much a thing but if Farke and his men are feeling any sense of pressure, there are no outward signs.

Last Saturday’s win at Bolton was very much of the masterclass variety and such was the ease with which we swept them aside, if we’re looking for positive signs then we should take heart from the fact that yesterday Bielsa’s mob only beat the Trotters by virtue of a rick from Remi Matthews.

And this Leeds is not the one that blew us away back in August. That Leeds would have been on the cusp of clinching promotion by now. Besides, this is all about us.

With only Middlesbrough of the top six left to play, this really is in our own hands and we look so full of goals right now, it’s both Yorkshire galacticos who should be worrying about us rather than vice-versa. Even with twelve to go, this is starting to feel a little bit like ours to lose.

That’s not to say yesterday wasn’t without its fraught and nervy moments – there were several – but this all adds into what has made this quite so thrilling. We’re not doing it the easy way but that’s because in the Championship there really is no easy way.

The heart-in-the-mouth moments, like watching Callum O’Dowda slalom past four players before cancelling out Kenny McLean’s equaliser, are about to come thick and fast and those of a nervous disposition – I’m looking at you Dad – really should look away now.

But this is the football we’ve all craved and have longed for, and even if it doesn’t ultimately deliver us a place at the top table, the joy and excitement it’s triggered still makes it all worth it. We’re in the midst of it right now, so it’s impossible to be objective, but in years to come we’ll look back on season 2018/19 and think ‘sh!t that was good’ – even if we miss out.

But there’s nothing to suggest this can’t take us the whole way and, at the risk of repeating myself, the fact that this side looks capable of scoring every time it attacks, even on the days when it’s doesn’t quite click, makes them hellishly dangerous.

McLean has deservedly made the headlines for his match-winning brace – a just reward for his patience if nothing else – and it’s great that he offers the midfield mix a slightly different dynamic, but this is the epitome of a team effort, with every sinew being strained in all four corners of the team. Seldom can I recall a City side with such appetite and desire – a testament to the man at the helm for whom it feels they would run through brick walls.

Naturally, heroes emerge from such afternoons, and not far behind McLean in the roll of honour are Onel Hernandez for his breathless display of speed and verve and Christoph Zimmerman for his body-on-the-line performance, but, for me at least, Tim Krul’s late catch of a high cross from just under his crossbar was the moment.

So, time to breathe again and realign the focus. Bermondsey it is for the next instalment. Strap yourselves in folks… it’s about to get even bumpier.