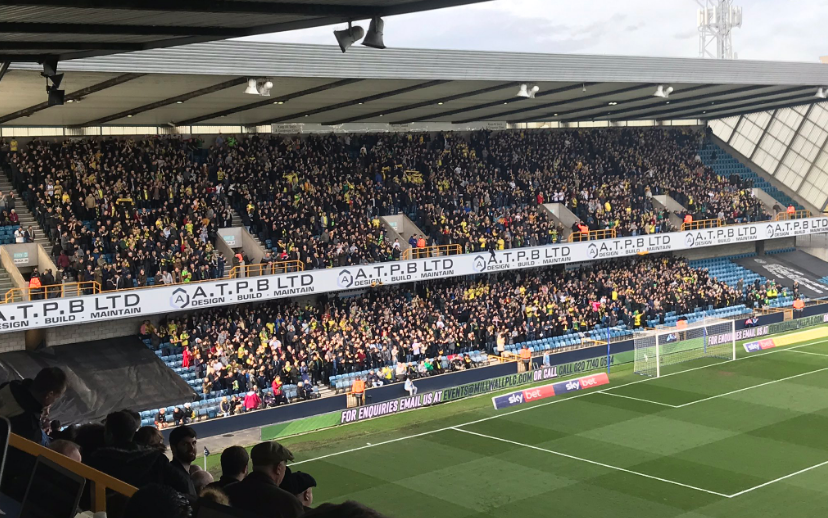 According to many, Millwall (a) was a “banana skin”, others called it the “acid test”, some even went as far as “season-defining”. Take your pick.

If you chose to run with cliché one or two, City either avoided it or passed it – and with some style – but it’s the third one that resonates. As Championship challenges go, a visit to The Den is right up there but is magnified if you go there as league leaders while the Lions are on a downward relegation-threatening trajectory.

Throw into that same mix an emphatic Leeds win on Friday and the pressure on Daniel Farke’s men was arguably the greatest it’s been all season. Luckily for them, they were able to take 3,200 pals along for the ride to help ease the burden.

What unfolded may or may not be ‘season-defining’ – we’ll only know in early May of course – but it was a special afternoon to add to an ever-growing list.

It may not have been vintage City – aesthetically pleasing performances may be few and far between from hereon in – but it was a classic case of getting the job done or, that terrible phrase, ‘finding a way’. There’s no escaping it – they did – and against a Millwall side who were very much at it.

That’s what this lot do – even when the flak is flying, they still find a way; a trait that tends to be shared by sides who enjoy open-top bus tours at the end of the season. But that’s for another day and the Class of 2019 haven’t worked and fought this hard to take the foot off the gas just as that pedal needs squeezing one final time. Team Farke won’t allow that to happen.

Your average promotion surge evokes stresses and strains on the emotions that can only be matched by a relegation battle – unless you’re  12 points adrift at the foot of the table and as good as gone – where you take an unhealthy amount of interest in the results of others.

You even find yourself getting emotionally invested, just for 90+ minutes, in teams you ordinarily despise (QPR v Leeds, anyone?), while feeling let down and disgusted by sides who fail to deliver the favour you had prayed for (Leeds v WBA). It’s normal – the life of a football supporter.

But, luckily, those who have tasked with steering this ship through the choppy waters of the top six hold no such sway in the results and efforts of others. In every pre-game presser and every post-match grilling, Farke gives off the air of someone who has it all in control and who knows that if he does his job the right way and gets his players to do the same, it will all be fine.

Aside from the odd spat with a fourth official and a fleeting moment of chest beating that follows every win, we have a cool customer in charge whose calmness clearly rubs off onto his players and staff. If he even did sit and watch Leeds v WBA on Friday, he’ll not have had the sweaty palms, nor indulged in the hand-wringing of the watching Yellow Army.

Instead, I suspect he’d have enjoyed a nice glass of red while inwardly tutting at West Brom’s lack of cohesion and panache, and marvelling at Bielsa’s set-up.

At the very least, if he is concerned by the results of others, he’s not showing it, which must boil down to that slender lead we have and the knowledge that if we do it right, the might of Yorkshire, however hard they try, cannot catch us.

All of which makes no odds to us. We’ll continue to examine the league table to within an inch of its life, complete every predictor table going, analyse our run-in compared to those of said Yorkshire giants and throw our full weight behind every single one of their opponents – even that lot (April 27 at Bramall Lane).

But, when all the nonsense is stripped away, it comes down to this group delivering us, say, six wins from our remaining eleven games with a couple of draws thrown in for good measure. I suspect that may even be good enough to win it. And there’s absolutely nothing to suggest our heroes are about to choke.

Also, there is the small matter of the strength of City’s bench and how Farke is unable to find a starting berth for his most experienced defender and best midfielder. The options are plentiful but while the current starting XI keeps delivering, there is no scoop for him to change it. To quote a ghost PM – ‘simples’.

To pick out any heroes over and above the magnificent 3200 seems a tad futile, but it would be remiss not to mention the magnificent Emi Buendia, whose incisive passing and crossing played a part in all three of City’s goals yesterday. Teemu Pukki deservedly captures the headlines but our little Argentinian has turned into an absolute gem.

We’re blessed with a magnificent squad and an equally magnificent management team, and none of us are even close to being ready to see anyone depart this group. And there’s only one way they stay together.

So, c’mon lads, six wins plus a couple of draws. Then we can breathe. And you’ll be heroes.

Talking of heroes we’re looking for some to back our Patreon fund-raising campaign here on MFW.

Enjoyed reliving a special night in the FA Cup for #ncfc with @SamSeaman8.

If you’ve got a bit of time before kick-off, why not check out @paddyjdavitt and I previewing the game.

First time we have ever had to clear the #satellitedish of snow! #SKYUK #Norfolk #ncfc