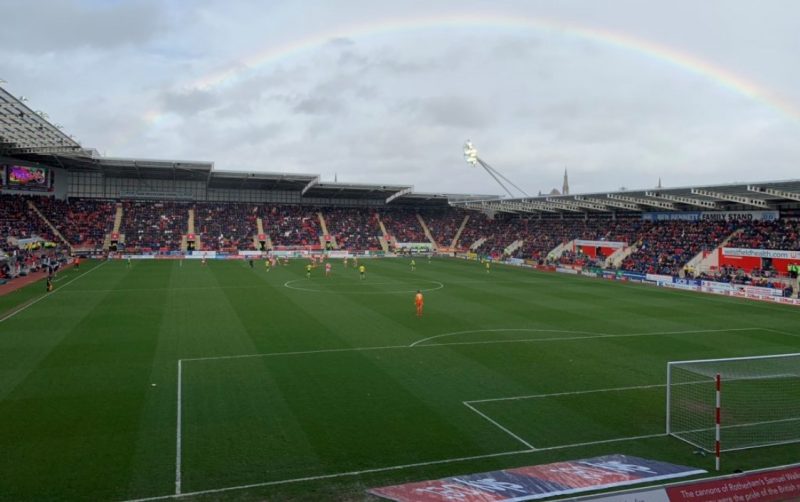 In an ideal world, Leeds would have won yesterday, then we would have beat Rotherham and gone into the international break with a juicy seven-point gap to third with eight to play.

Of course, Chris Wilder and his merry band of Blades had other ideas and instead it was the Yorkshire galacticos who blinked first. What we had dreamed of being a seven-point gap is actually now five, but worth noting is that although Leeds did ‘blink’, they played well and were unlucky.

“Leeds are falling part again” is the refrain but, unfortunately, I don’t see too many signs of it if I’m honest. As much we’d like them to fall apart and slide away to third, I’m not feeling it. This really does feel like it’s going to the wire.

All of which makes yesterday’s win in a blustery Rotherham all the more vital… and impressive. On such wins are promotions built, and the reaction from the City bench as Oliver Langford blew the final whistle spoke volumes. It said far more than ‘phew… another three points’. They knew.

Unlike those down south, Rotherham recognise what it takes to fight relegation. Farke knew it was going to be a battle and they didn’t disappoint. It was bitty, it was physical, it was attritional and it was a slog, and yet still, displaying qualities that play only a peripheral role in Farkeball, this group delivered yet again.

Six wins in a row is a phenomenal effort in anyone’s book at any time, but to do it in the way they have when the pressure is being cranked up from all quarters, has been extraordinary. If we were ever in any doubt, this really is a special group of people that Stuart Webber has put together.

The sad thing is, whatever happens over the next eight games (and let’s hope there is no necessity for two or three more), this group, who have brought us such joy and exhilaration, will be no more. The revolving door of football will see to that.

If we do make it to the land of milk and honey, this group will undoubtedly be bolstered with some new faces. Not of course on a Fulham scale, and Webber knows all too well the value of maintaining the core and, importantly, the spirit of this group, but it’s inconceivable that there wouldn’t be some quality added to this squad.

By the same score, there will be those currently on the periphery who would fall further down the pecking order were fresh faces come in and who would, understandably, look to further their careers elsewhere. That’s life, that’s football, and of course, there will be bids coming in for Messrs Aarons, Buendia, Lewis, Godfrey and co, even if we do go up.

The flip side – if we don’t make it to said land of milk and honey – will be more painful. All of the above names, plus several others, will be very attractive options for clubs looking to survive in the 2019/20 Premier League. One will almost certainly be in the sights of the top six.

Without even thinking too hard, there are at least six who I’d suggest wouldn’t be here on August 1, 2019 if we are still a Championship club.

The club would obviously be handsomely compensated as a result – with sums that would turn certain parts of Suffolk various shades of green – and such has been the club’s recent recruitment success, who would bet against them unearthing some more gems, but the Class of 2019/20 would look nothing like this current crop.

But, like it or not, we have almost reached that fork in the road. Bear left and we maintain most of those who have carried us this far plus we welcome a few new faces who will hopefully enhance what we already have, or we turn right (eugh on every level) and watch as this group is dismantled over the summer.

Either way, things won’t stay the same, that much we do know, but there is a right and a wrong way for it to happen. And my god I hope we bear left.

Eight games are too many for any laurel resting – Daniel Farke won’t allow that to happen anyway – but a four-point gap at this stage is still not be sneezed at, regardless of how easy or otherwise the respective run-ins are perceived. It’s worth noting too that a couple of bookies have us as short as 1/2 for the title.

I think we put the blinkers on, squeeze the throttle and head for that finishing line. Because we can do this. I know we can.