With a little bit of help from the world’s biggest tax-dodging search engine, I’ve narrowed it down to February 24, 2001. It was a game under the Carrow Road lights, City v Wolves, which was won by a Paul McVeigh goal after three minutes.

I can’t remember too much about the game other than I watched it with my dad from the Upper Barclay and it was absolutely $hit. So $hit in fact that when I got home it felt compelled to put my thoughts down on paper. Dad argues it was the first time I was ever published, as it made the Pink Un letters page.

Sadly, I can find no trace of said letter, but I can remember all too well the thrust of it. To understand better the non-events of that dire night, it’s worth looking at the line-ups: 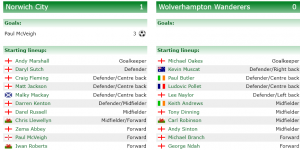 So, on paper, not a bad City side, and let’s not forget that a year and a bit later it was a squad that would be taking us to the 2001/02 Playoff Final, but even the most partisan and non-judgemental City fan would have to agree it’s a little light in the midfield area.

I can’t recall Nigel Worthington being a huge fan of deploying three centre-backs, so I’d be grateful to anyone who could tell me the exact formation that night, but given the paucity of ball-playing central midfielders, you’ll not be surprised to hear that Messrs Mackay and Fleming (and presumably Master Jackson too) spent most of the evening either heading the ball clear, or banging it into the channels.

And that, as I recall, was the thrust of my Pink Un letter. Of course, we had Iwan up top at his finest and the pace of Zema Abbey, so there was a natural tendency to want to use Iwan’s ability back to goal and Abbey’s ability to run in behind, but over the mists of time all I can recall from my Upper Barclay vantage point that night is seeing Malky and Flem thump it into the channel.

That’s literally all I can remember, and part of me is disappointed I was not in the River End that night as I’m sure there were some in there who were totally lapping it up, but for me it was gruelling, soulless and pretty much the opposite of what I was looking for from my heroes.

And the reason for dragging up some insignificant event that occured 18 years ago? Because I look back to nights like those and am therefore doubly thankful for what has unfolded before our very eyes this season.

That doesn’t mean this is the best City side I’ve seen – that always strikes me as a futile argument not least because this team is doing its stuff in the second tier – but in terms of pure football, what we’re seeing now is simply brilliant, and for all the great sides I’ve watched, I can’t recall one that can shift the ball quite like this one.

And there have been some good ones.

John Bond’s arrival in the mid-70s signalled a significant shift in ethos, which looked doubly marked because of the attritional style it succeeded, and there was a pleasing flow and swagger to those Bond sides that was especially suited to those bowling green style pitches of the early season.

That said flow would be hindered by the pitches becoming muddier and balder- as they did back then –  goes without saying, but still the ball was shifted on the green/brown stuff. How could it not be with the great Martin Peters plonked in the centre of that midfield.

And, to be fair it was a style that became ‘the Norwich way’ throughout the Brown, Stringer and Walker years, and along the way there were some brilliant players who were implementing it. And I make no apologies for banging on about Ian Crook for the umpteenth time, because he was the very epitome of it.

Whether it was to ping a ball onto a sixpence from fifty-yards, or whether it was to open a tin of peas with his right foot, or whatever your cliche of choice, Chippy could do it. As if you needed reminding, just look at the third goal in this @RewindNorwichCity clip from this 3-0 win over Mike Walker’s Everton…

How bloody superb was that.

The Worthy years were notable for some brilliant players – notably Darren Huckerby, who remains to this day my all-time Canary hero – but it was a style of football that relied on outstanding individuals to ignite a group of players who at their core were committed, driven, solid and experienced.

The Lambert, Hughton, Adams and Neil teams had some good players woven into them – the former especially reliant on a few fine individuals who formed its core – but at no stage was the football ever truly identifiable with a particular style. It was good at times, of course, but it often felt ‘off-the-cuff’ rather than being held together with a golden thread.

What we’re seeing now is different. Among the pieces of individual brilliance that are becoming increasingly prevalent from the feet of Emi Buendia, or the oddly effective dancing size 12s of Marco Stiepermann, or the 360 vision of Teemu Pukki, we have a structure and style that is so pleasing on the eye, even minus the flicks and tricks.

It’s embedded. Every player who comes in knows the routine. They all bring their own individual elements to the party but the whole thing is underpinned by this beautiful, smooth, cohesive way of playing that sets this group apart from almost every other.

Ironically, of late the beautiful game has, by necessity, taken second place to the brutal game but even in games where scrapping and digging in are the order of the day, the desire to pass rather than hoof one’s way out of trouble is always there.

It’s not always easy to appreciate things while you’re in the midst of them – and there will always be the ‘get rid of it’ elements in the River End who will look back with misty eyes to the Worthy era – but this is a really special time. With special players. With a special head coach. And, yes, with a special sporting director.

Let’s soak it up while it lasts.