By way of an international break ‘filler’ and to launch us into our eight-game mini-league that’s about to decide the medium-term fate of this football club, Rick suggested a revisit of the team’s pre-season predictions would be in order. So, reluctantly, without further ado… 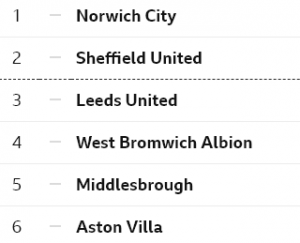 Apologies to anyone who has the misfortune of bumping into Mick Dennis as he reads this.

Of course, our Steve will do the number crunching at the season end (he loves a spreadsheet), so I’ll deliberately avoid second-guessing any placings in our own little league table, but suffice to say yours truly’s Ipswich Town-style showing in the weekly prediction league has been matched with another feeble showing above.

Also, suffice to say our Mick will be in the mix, although he may be rueing his decision to plonk both West Brom and Villa into the relegation zone; decision-making on a par with me thinking Stoke City would be in the top two. I was in good company though, with Ed, Martin, Gary F, Stewart, Sam and Steve all expecting Gary Rowett’s Potters to go one better and win it!

Equally, only four of us predicted that the top three would include any of the current incumbents – Connor, Sam and moi (Leeds) and Mick (City) – with just five of the team (Gary F, James, Mick [again], Andy and Sam), considering the Blades of the north worthy of a top-six finish.

As we’ve already established, Mick was the only one to predict that City will top the table but there were some other top-six believers among us, with eight aficionados predicting either a fifth or sixth place finish for our heroes.

At the other end of the table, Mystic Mick again takes centre stage with his decision to plonk those down south at the foot of the table but, while many of us had Bolton and Rotherham also in the drop zone, only Sam has predicted the current bottom three.

Most, to be fair, had a fair handle on those who would occupy the league’s nether regions, with only West Brom, Villa and Hull being featured with no real prospect of them actually joining Lambert’s lads in blue.

So, what does this all tell us? Well, not a lot really, other than that trying to predict the Championship is about as futile as asking the current PM May to be honest and upfront.

With eight to go, it could all change, but my money at this stage would probably be on Mr Finbow. But what do I know…