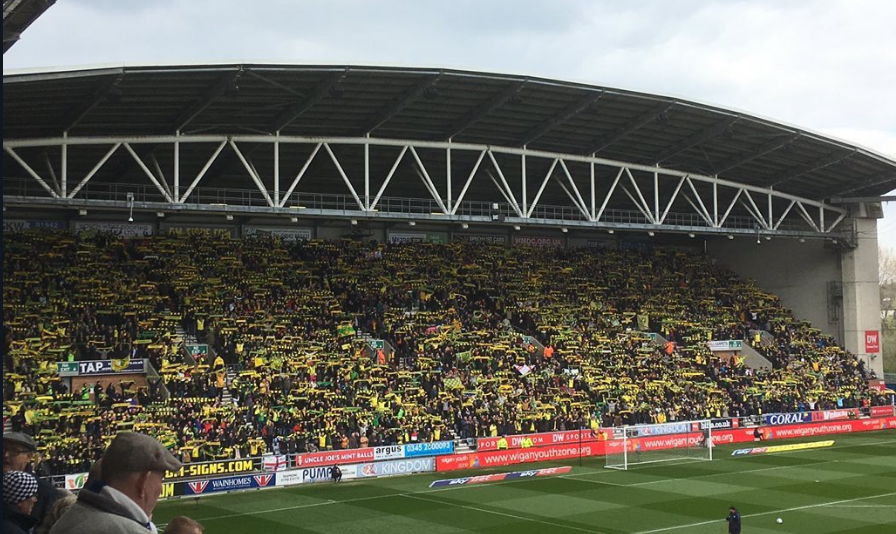 In keeping with the UK 2019-style, yesterday lunchtime’s 1-1 draw in Greater Manchester had a polarising effect on the Canary Nation.

Those of a positive disposition perceived it as another step closer to the ultimate goal. A point, a vital point, which at least matched the result of Wilder’s wobblers and maintained the gap, with the Blades now having a game less to close it.

Meanwhile, those for whom the glass is half-empty saw it as confirmation that City are in now in the midst a bona fide dip, with Emi Buendia’s absence stripping us of the creativity and fizz that has taken us to the cusp of something great.

One thing that those on both sides of the divide should agree on, however, is that City remain in an enviable position. Even the most cynical Canary must accept that being seven points clear of third place with four to play is a more than a healthy position to be in, especially when that’s effectively eight given City’s superior goal difference.

Yet, while Paddy Power and co may assume it’s job done, there is still some distance to cover before we hit that finishing tape. And, as we’re being reminded, it’s invariably those final few metres that are the hardest. To paraphrase an astute tweeter from yesterday, we’re 5-1 up in the final set but after sailing through the match with ease, we’re now struggling to hold our serve.

All of which is no consolation to those tasked with getting us over the line, and there were signs yesterday – almost for the first time – of it all weighing a little heavy on the shoulders.

That Wigan were very good yesterday was no surprise, however, and after checking out the home and away tables last week, it became very clear why the Latics are hovering just above the relegation zone – and it was certainly nothing to do with their home form.

Paul Cook is a canny operator and deployed a game plan that simply didn’t allow City to play in that first half. To say they played ‘on the front foot’ is simplifying what was a well devised and well-executed press, which not only hindered the back-four’s ability to find forward passes but also squeezed Tom Trybull and Kenny McLean in the next phase.

The same happened in the wider areas with neither Onel Hernandez or Todd Cantwell being given time or space to square up their opponents or even get their heads up. As a consequence, the supply to Teemu Pukki was limited, so too the chance to get the ball to the feet of Marco Stiepermann on the half-turn in those areas between the lines.

For the first time in ages, it was a hard watch and despite Wigan’s goal coming from what looked a particularly harsh penalty, it was no more than they deserved. For once, City didn’t have the solution to problem, with several players dipping below the high standards they have set themselves this season.

But it’s a been a long hard slog and they’re not robots. A stumble was inevitable at some stage and against a Wigan side who are clearly better than their league position suggests, this always felt like a banana skin waiting to happen.

Stiepermann copped some flak, as did Hernandez, and both were clearly below par, but have been integral in City’s rise to the summit and don’t overnight suddenly become the bad players that some on Twitter were suggesting.

Todd Cantwell too was on the receiving end of some unjust criticism, with some nailing him for not being Buendia and not being able to do the things that Buendia does – all of which left a slightly bitter taste and belied the togetherness and trust between fans and players that has taken us this far.

There was a clear increase in intensity after half-time, helped by the inevitable decrease in Wigan’s, and there was more of the old City in evidence in the second half, although it did take a brilliant save from the imperious Tim Krul to deny Leon Clarke in a one-on-one. At 2-0, City would have been gone.

But with the ball being popped around with more precision, everything happened a little quicker, even though it did take Daniel Farke’s triple-change on 76-minutes to make the decisive difference.

Ironically, Mo Leitner, Mario Vrancic nor Jordan Rhodes played direct roles in Pukki’s equaliser – McLean getting the assist with a beautifully weighted pass – but their collective impact changed the dynamic to such an extent it felt like when and not if, and no one would have been surprised if we had gone on and sneaked a late winner.

Leitner brings composure and poise, Vrancic brings silky passing and an eye for goal, Rhodes is the original fox in the box, and it worked. The shape was compromised as a result but it mattered not one iota and hindsight, being the wonderful thing it is, suggests that had that triple change been made ten minutes earlier then the outcome could have been even more favourable.

It was clear why Farke was unwilling to change his starting XI during that run of consecutive wins – to change a winning side in any circumstances takes a leap of faith – but now does feel like the right time to freshen it up a little.

Even if it takes a couple of positional changes to accommodate him, it feels like the right time to reintroduce Leitner, and Vrancic’s comfort in possession and knack of getting himself in goalscoring positions will be invaluable over these next four games.

Farke will think long and hard about it, and as a devotee of the ‘if it ain’t broke, don’t fix it’ school of thought will be loathe to send out negative messages to those who have served him so well, but minus the unexpected that Buendia brings, there’s an argument for things to be tweaked and done a little differently.

The tweaks will be minor though, barely discernable, but minus Emi for one final time, that creative spark needs to be reignited against Sheffield Wednesday on Friday night.

Yet, for all the travails of yesterday lunchtime, it was another small step closer to the ultimate goal and it speaks volumes for the season we’ve had that two consecutive draws are perceived as a mini-crisis in some quarters. In our last ten games, we’ve won eight and drawn two – some crisis eh?

So, rather than a blip, I think the 5300 witnessed first-hand us edging that little bit closer.

In the words of the Chris Martin who can frequent pubs in Beccles, nobody said it was (going to be) easy.