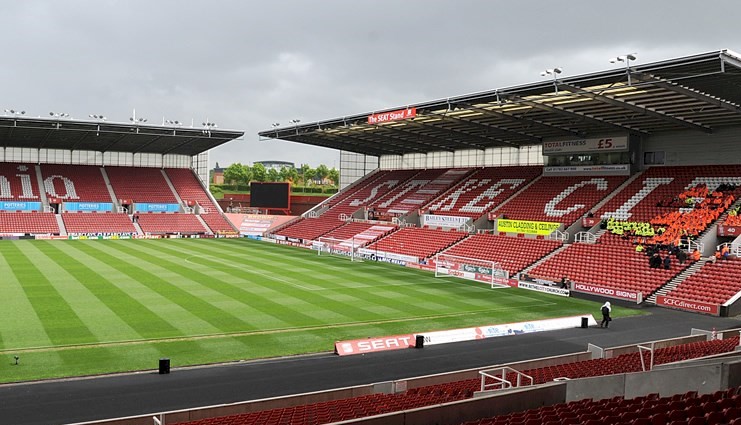 When it’s Stoke up next, it’s a no-brainer as to where to turn – so, as ever, it’s to my old mate from our Metro Sport days, Mr Matt Meir. Here are his thoughts on the Nathan Jones era, why Paul Lambert is no longer in the Potters’ dugout and accountants’ notepads…

So, Gary Rowett … thoughts? Has the Nathan Jones era kicked in yet, or does he need a transfer window or two to get together a squad that’s his own?

It’s easy to say, “he needs his own squad”, and it’s become a bit of a cliché really hasn’t it?

We said the same thing about Paul Lambert (he’s a bit of a god around Norwich, isn’t he?) last year, and then he was replaced with Rowett… The same was said about him, but he was soon dispatched once the fans started making themselves heard.

Truth be told, Jones needs more than a transfer window or two to get the good times back at the Bet365. Fan patience has been in short supply since Mark Hughes’ third year in charge, and it hasn’t yet been re-established. Jones needs the fans backing but, maybe more importantly, he needs the board’s backing – and, at present, he appears to have that. Nathan has drafted in a number of youngsters from the Academy to-date and, on the pitch at least, none have noticeably let themselves down.

The fact he is seemingly happy and willing to play the Academy graduates will undoubtedly earn him some credit with the Board – they’ve been talking about the need to be self-sufficient for a number of years and with FFP no doubt beginning to raise its ugly head following relegation, it’ll leave the accountancy team a little happier on transfer deadline day. That willingness from Jones has also won a little favour amongst the fan base, who have been questioning for some time where our next ‘big name’ from the youth ranks will come from.

We need a period of stability – a good two or three years – to allow Jones to build his own squad, move on the ageing members and allow more of the academy to come through. Jones talks more about building an ethos around the club, rather than building a team. It’s similar to what Pulis did, similar to what Ferguson did at Manchester United and what Pocchetino is doing at Spurs right now. Give Jones time, and he could really make a lasting impact in Stoke.

You’re partly right about Lambert being a god around here. If you’d have used the past tense I’d have agreed 🙂

Am guessing the expectation was to bounce straight back to the Prem? Should it or could it have happened? If so, where did it go wrong?

I’d be lying if I said there was no expectation.

Casting my mind back 12-months, I (maybe naively, somewhat) had an expectation that we’d bounce straight back up – even though I know (and remember too well!) how tough life is outside the Premier League. Unfortunately, it quickly became apparent that there were simply too many mercenaries within the ranks.

We miss the days of Tony Pulis where players were chosen not only for their on-field performances but also their influence in the changing room. Under Pulis, there was a clear strategy that if your personality didn’t fit in, you weren’t signed or you’d be gone. Under the directorship of Hughes, that left – along with it a sense of self-discipline and respect. Lambert failed to rebuild that entirely, and Rowett seemingly struggled, too.

Without discipline or respect, it was always going to be tough to build together a run of results to push for promotion – whether via the play-offs or directly. Accusations amongst the fans continue to fall at the door of the CEO (Tony Scholes) and the recruitment team, as well as the various managers. But one has to wonder whether it’s a collective failing, rather than individual, that resulted in complacency setting in that, in turn, led us to where we find ourselves now – relieved that, with three game remaining, we’re safe from relegation..!

Ever any remote possibility that Paul Lambert was going to be taken on, on a permanent basis?

It’s a difficult one… If the decision was solely down to Peter Coates, I think there would have been a possibility, yes. But, as he (Peter) ages, his son and daughter, John and Denise, are being spoken of more by the local media – and it has to be asked whether they’re having more input into the running of the club now.

I believe John has more of a say on the footballing side of things, with Denise having more involvement in the financial side – although this may be more unofficial at present. The forthcoming close-season will be interesting, as I’m sure Denise will want to see more black than red on the accountant’s notepad…!

We’re pretty familiar with Rowett’s style of play – and to be fair you did a very annoying number on us at Carrow Road earlier in the season with him at the helm – but less so with Jones’. How do they compare?

Right now, it’s difficult to say. As I’ve already said, Jones has played a number of different players and varying tactics. I don’t believe this to be out of ‘necessity’ as a result of injuries – but more out of desire to see what’s needed over the summer. He’s run the rule over the previous outcasts in the squad, looked at the fringe players and given an opportunity to the youngsters who’ve been training and travelling with the first team squad.

It makes sense – he came in during the January window but didn’t make any wholesale changes. Instead, he has remained patient and tinkered here and there. Team selections and formations have raised a few eyebrows at times, but there does appear to be a method to the madness – and we never quite know what we’ll get from game-to-game.

Amidst your season of mid-table mid-tableness, who’s impressed you? Any lesser known names we need to look out for on Monday?

Few names have made a big impact this season, unfortunately. Etebo has been the most frequent stand-out player, with some managers even questioning where we signed him from.

Thibaud Verlinden may make an appearance and comes highly rated by the followers of the youth team.

There’s also the possibility of a goalkeeper change – Federici deputised on Friday for Jack Butland who was celebrating the birth of his son, so Adam may continue, or Jakob Haugaard may make an appearance (if he does, there could be a cricket score!).

Your thoughts on Farke-ball? Is always interesting to get an outsider’s take on how we are being perceived outside the Canary bubble.

The desire to build a club off a philosophy is strong and something I’ve long admired. Ferguson, Wenger and Cruyff all did it – so why not a non-top flight team? I mentioned before about Jones needing time and we as a club needing stability – and it’s something that Norwich seem to have realised themselves, too.

It would have been an easy to sack Farke after a mid-table finish last season when the demand was there for promotion – but patience has, so far, paid off. His reputation from Germany may have helped somewhat to alleviate a bit of the normal pressure, and it’ll be good to watch next year in the Premier League. Hopefully, the patience will remain, and he’ll make Norwich a success in the top flight for a couple of years at least.

Finally… a prediction for Monday (be gentle with us, we’re sooo close and we’ve had nothing but banana skins lately).

Given our complete unpredictability, I’ll take a punt and say that we’ll have around 65% of the possession but lose by the odd-goal; a 1-0 victory on the road for the Canaries.

Penney predicts: Still getting my breath back from Wednesday on Friday. But Emi returns (doesn’t he, Daniel) and the Potters seem not to be overexerting themselves just now, so I’ll go for 1-0 City.

Andy assumes: A draw would set things up to possibly win it all against Blackburn. But for once, I think City will eschew the dramatic and have a comfortable 2-0 win. Let the dice fall where they may elsewhere.

Cookie concludes: At this stage, who knows? All of the top 3 are showing the strains and stuttering towards the finish line. Heart says a City win, head says 1-1 draw.

Stew suspects: Stoke are low-scoring draw specialists. The lift from Mario’s equaliser and Emi’s return could just see us edge it. 1-0 to Norwich.

Oppo’s opinion: A 1-0 victory on the road for the Canaries.