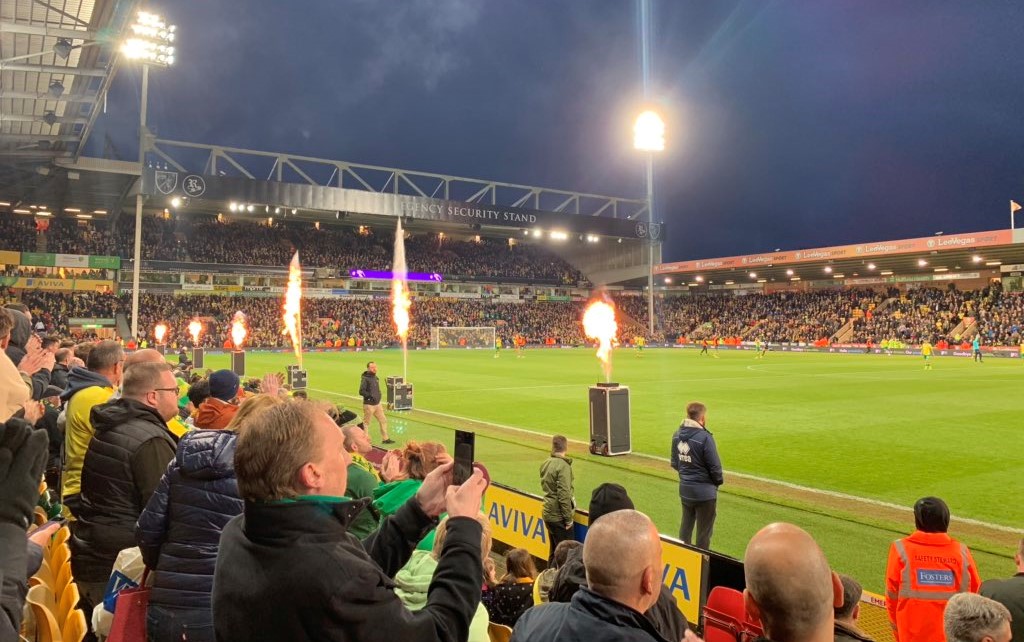 Not since 1960 has Carrow Road witnessed a promotion being confirmed, so forgive me if I get a little misty-eyed over the next 1000-ish words. Nights like last night don’t come along very often.

Even those of an iron disposition and a cold heart couldn’t fail to have been moved by those special minutes between Andy Madley’s final whistle and the players eventually heading down the tunnel to continue their celebrations in private. Moments that will remain forever.

For me, and for many, it was more than just soaking up all that was before us in that moment. I also remembered those who weren’t there; some who missed out because they couldn’t make it and some who are no longer with us.

I thought of my dad, whose health prevented him from making it to last night’s game, and how despite being to hundreds of games together, we’ve never shared a promotion celebration.

I thought of my grandads – both now long departed – who were both die-hards and who would have loved every second of last night.

And I thought of two gents – one called Brian and another called Frank – who are also no longer with us but whose season tickets were near us and who for many years were ‘uncles’ in my Norwich City family.

When On the Ball City rang out last night, such was its power and resonance, I swear it was being sung by more than 26000 voices. And I know why.

They’d have all been so proud of the fact that City did it in such style.

2-1 it was, and it wasn’t without its nervy moments, but so many chances were created Blackburn will know they got away with one. Add in a couple more goals and it would have been in masterclass territory – the first half in particular – and it says everything about this group that on a night when they would have been forgiven for being twitchy and nervy, they found a stellar performance.

Minus a Tom Trybull to provide the ballast in that midfield, there tends to be a slight air of vulnerability when teams turn the ball over and Ben Godfrey and Christoph Zimmermann are left minus an effective shield, but the trade-off is the artistry and composure that comes with a Vrancic. Not to mention the odd thunderb@stard.

There was also the small matter of the link-up play between the front four, which was frightening at times, as was the equally vital first phase of the press as demonstrated perfectly last night by Marco Stiepermann and Teemu Pukki. The work rate in this team is just off the scale and is one of the reasons why our Premier League tenure may not be quite as brief as planks like Danny Baker assume.

Some, I hesitate to say most, Premier League campaigns of the recent past by have been notable for their scattergun-style preparations; I’m thinking particularly of the Chris Hughton and Alex Neil seasons when far too much time and effort (and money) was spent chasing unattainable transfer targets.

This time will be different. For starters, we won’t be spending ten of millions on single players, not least because we don’t yet have that money to spend, but more importantly, it will be about bringing in a few faces who, for starters, will be glad and honoured to be here.

Stuart Webber may use the ‘stepping stone’ line to try and attract names – I really don’t know – but I do know those on the list won’t be giving us the Ola Toivonen/Toby Alderweireld “I’m too good for you” treatment. In fairness to the latter, he probably was.

Webber’s list will instead consist of a few carefully chosen names who, like Emi Buendia, will have emerged from a list of hundreds via some impressive numbers. The person, as opposed to just the player, will then come into play, as will Stuart’s’ No-D1ckhead’ policy.

And you know what – I trust him and his recruitment team implicitly. While the names that come in may be unknown to most of us, they’ve more than earned that trust.

The national media will scoff, a certain talkSPORT shock-jock will start the relegation countdown and everyone outside the Canary Nation will take a bottom-three finish as a given because we haven’t done a Fulham and spunked £100 million on ‘names’. But it’s not their fault – they just haven’t cottoned on to the fact we’re doing things a little differently around here.

The media frenzy around Frank Lampard’s Derby County at the start of the season was quite frankly pathetic, so too the love-in for the coaching visionary that was Marco Bielsa and their desire for Aston Villa (as well as Leeds) to ‘make it back to the big time’ was bordering on obsession.

They’ll not learn and it’ll not change. I await the pundits’ predictions at the start of next season and the majority predicting that City will come back from whence they came because ‘they haven’t spent enough money’.

We’ll again be made to feel like unwelcome guests at a swish party – that much is virtually guaranteed – and there will be a plucky-little-Norwich tone around every game and every bit of punditry.

But this will be different. These are different times and I look back to those games against Chelsea and Arsenal last season when under Farke we equipped ourselves well on the biggest stages. There will be no fear and even the odd shellacking won’t change the plan or the method or the style of play.

And I’m confident Carrow Road will continue to be a vibrant, positive place and I so hope that those whose tendency is to criticise, use perspective when the fallow times come along, which they will. But rather than this being the culmination of a brilliant season, one that few of us saw coming, let this be the start of something even greater.

Let this be the first step on a path that will see us mix it with the best. Bournemouth, Leicester and Southampton have all achieved it – why not Norwich City under the tutelage of Webber and the extraordinary coaching skills of Daniel Farke?

But that’s for another day. Today is for processing the events of last night and the last nine incredible months – arguably the most thrilling season in the club’s 117-year history.

I’m not sure it gets any better than this.

Be proud people. Be proud. It really did just happen.

One the Ball City