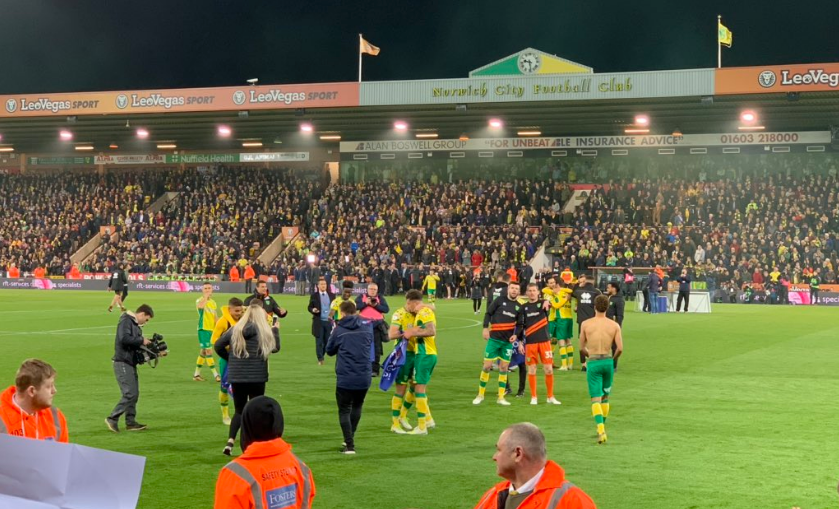 Not because of celebratory after-effects – understandable as that might be – but because my words simply aren’t good enough to describe the achievements of this Norwich City team and the feelings they’ve inspired in us.

I’ll need to borrow some words from others.

Starting with Canaries Trust chairman, columnist for the EDP (and when he can, for us here) Robin Sainty. Explaining last week why our wait on the verge of promotion was a specially agonizing one this time:

At the time of those promotions, I couldn’t imagine feeling the way Robin describes – but it’s absolutely true.  The most common thing you’ll hear from our fans is that they’ve never been prouder to support the club.

Success is always sweet, but there’s something extra about this one.

Is it the boldness of the club to take a new direction two years ago, to widespread scepticism (irony of ironies, much of it coming from our Suffolk friends)? The sheer likeability of Daniel Farke and openness of Stuart Webber?

Perhaps the fact that we’ve had to recruit through quiet hard work and creativity, while others were throwing money at the vision of promotion and being idolized by the media?

Is it the playing style?  The best we’ve seen at Carrow Road for many years, possibly ever? Even the most cynical have been won over by our football, if they have any feel for the way the game’s meant to be played.

Or is it the players? Quality footballers, but also a group who come across as genuine, grounded people, far from the stereotype of the pampered professional.

Maybe that they’re people who ‘get’ important things that our club stands for – Christoph Zimmermann attending every fans’ social event, Tim Krul taking time with a boy he learned was being bullied, the squad engaging with supporters and doing charity work with obvious sincerity.

Is it the emergence of “our own” – players from our Academy who are being allowed to make their mark? Or the unmitigated support they’re receiving from the experienced pros, including the ones they’re keeping on the sidelines?  (Did you see the Sky interview of Max Aarons with Tim Krul?)

Or the sheer will of this group, even when things are going against us, not to be beaten?

All of the above, I suspect.

The bottom line is there’s a palpable togetherness in our club that’s infectious for the fans and the city. A year ago, we were fretting how to make the atmosphere at Carrow Road more vibrant. No need to worry on that score now.

Togetherness is the reason we’re top of the league and Stoke 15th when pundits expected it to be the other way round. As Sky Sports’ commentator said at the final whistle on Saturday:

Perhaps our players have been reminded – or perhaps they’re just the kind of characters who don’t need reminding – of what makes success.

Michael Jordan, by common consent the best basketball player of all time and a man seen as having carried his team to success, was clear:

What of next season? Some of the pundits who wrote us off this time are already lining up to do it again.

It’ll be a different challenge, of course. Whatever deals Stuart Webber conjures up this summer, we’ll have spent less on our squad than anyone else in the Premier League. We’ll have to sustain our belief without the advantage of winning runs to consolidate it.

This time, though, I can’t be pessimistic. We had to be better than bigger spenders and more glamorous opponents this year, and we won’t forget or abandon how we did it. We have the talent-spotting acumen of Stuart Webber and his team, and the motivational and tactical nous of Daniel Farke.

We’ll give it a good go. I don’t expect us to win the Premier League, but I expect to be proud of our team again. We won’t lose our senses like Fulham or lose our nerve like Alex Neil.

Meanwhile, it would be nice to secure the title at Villa. In previous promotion seasons, the phrase in our minds was “we want it”. This time it’s “we deserve it”.

Now and again, sports fans around the country witness a special team: one that succeeds not through money and big names, but through togetherness, willpower and style. One that will be written about as an illustration of the power of teamwork.

And this year, it’s OUR team.

As Sir Alex might have said, “Football – well, well”. Or words to that effect.