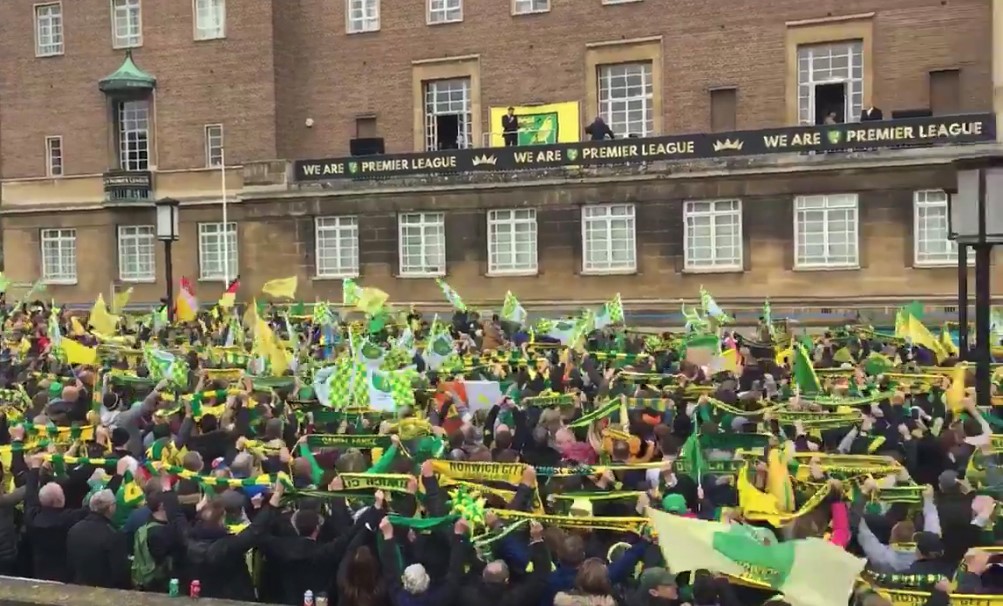 Thousands lined the streets of Norwich city centre yesterday, waiting to catch a glimpse of that precious piece of silverware that was claimed at Villa Park on Sunday.

A promotion celebration fit for champions was ordered and the people of Norwich duly obliged. A reported 12,000 Canary loyalists painted the scene in front of City Hall as it was turned into a yellow and green sight to behold on Bank Holiday Monday.

The early start was no obstacle. These supporters have committed themselves to thousands of miles of travel to some obscure locations in order to support the club they adore so much, and all in the hope of seeing a competitive team who could restore the pride in this football club.

As Delia Smith stood on the balcony, she discussed the nature of the togetherness that has been so prevalent this season.

That togetherness was palpable as players shared their victory with their supporters, all of whom have immersed themselves in this remarkable season. Joyous football, possessing the likeability factor but also creating a connection to the football that was constant – the Class of 2018/19 have passed their way out of the division.

They have immersed themselves in the culture and, equally, have fully invested in the philosophy Daniel Farke has sought to construct over the last eighteen months.

Quite simply, this has been a remarkable surge.

Late goals, important cameos and a squad standing as brothers and having total self-belief are pivotal tools to any success. The Championship is a rigorous division both stylistically but also physically and mentally.

This group have evoked every emotion possible and squeezed out every per cent possible in order to help climb the table and have encapsuled every dream for everyone who has grown up a Norwich supporter.

Farke invited them into a project which has redefined Norwich City.

The shirt holds significance and the weight of it is isn’t now a hindrance but something to embrace. Expectation has been eliminated and football has become fun again.  Tedium and frustration were the overriding feelings towards the bookend of last season but now positivity has been fully restored. Merely witnessing the depth of people occupying the streets to worship their heroes yesterday illustrated that.

Now it’s over and the mood turns to one of reflection, you appreciate the magic of this campaign and the way it has reunited supporters with the game itself.

When you confirm your allegiance to a football club, you do so not to enjoy constant success nor to follow the glory but to feel a sense of belonging. That connection cannot be manufactured. When your football team succeeds, it makes everything worthwhile. All the struggle, all the air miles and all the frustration are forgotten when a moment of euphoria is realised.

That Championship trophy was paraded with pride prior to the Wes vs Russ game but it merely represents the togetherness that has led to this moment. For those members of staff work tirelessly behind the scenes, for those players who have provided the dressing room with positivity despite not getting minutes and for the owners who rarely get the recognition they deserve.

This was for all of them.

In modern society, there is more that divides than brings together but football stands as a rarity for what it stands for and represents. Nothing else has the power to draw in 50,000 people in two colours as one. It creates a community all of its own.

As a sport, that facet must be cherished.

Within it, charitable causes can be supported – as was witnessed in the game that followed the civic celebrations through the city centre.

Russell Martin hadn’t received the opportunity to wave farewell to the Norwich faithful who enjoyed his heart-on-sleeve performances over a prolonged period. Regardless of talk surrounding his positional change or ability, he always gave everything. And by mentoring the young players and refusing to shirk responsibility, he was – and still is – the consumate professional.

He led this club to a Wembley win, was a major player in three promotions and wore the shirt with passion.

A true club man who never demanded the accolades and took intense vitriol on the chin; that in itself speaks volumes of the man.

To have a send-off party that was watched by nearly 20,000 people is what Martin and Wes Hoolahan warranted for their contributions to our club over the last decade. The backdrop of the promotion party made it a magical day.

Magic is a theme that seems to follow Wes around.

Anybody present inside Carrow Road (or watching the club’s YouTube stream) witnessed a vintage Hoolahan moment as he dropped his shoulder to beat numerous defenders before producing a chipped effort that Tiger Woods would have been proud of.

Yet, despite his showmanship on the pitch, he is a shy, reserved character off it. Notoriously, interviews are not his favourite things in the world.

There’s a sense of expression to his play, his feet provide the words his voice is reluctant to.

This was goodbye to the Irish wizard. No more dropped shoulders, no more clever turns. Wes Hoolahan will be a name associated with Norwich City for years to come, probably forever, because of the manner in which he plays the game.

So… another season completed but one that will be placed in the history books for generations to flick through and recall the everlasting memories created this campaign. Joy will be the overriding emotion but that taste of victory is moreish.

From a season that supporters were imploring to end to one that they never wanted to – this group has exceeded all expectations and have become Norwich City immortals.

Most of all, it’s rekindled everyone’s love of this football club. Supporters are at the forefront of this Norwich City project orchestrated by Stuart Webber and Daniel Farke.