Well, what can you say to that?

It’s been a season of marvellous memories, and now we can add Sunday, May 5, 2019, to the annals of our club history. Our boys in yellow ‘n’ green ended a stunning season in the style that’s become their trademark – and long may it continue.

We all know our story, we all know the key players, we all know what’s gone into achieving arguably one of the club’s greatest feats in recent decades. That said, it amuses me that our success seems to have gone almost under the radar outside of club circles or Championship fans – but who of us really cares?

As Tim Krul said after the match, this is the kind of season that we’ll all be talking about 20-30 years from now. Whether it’s been winning runs, unbeaten runs, Teemu Pukki’s goalscoring heroics, stoppage-time winners, or making it ten years unbeaten against our nearest and dearest, it’s been history in the making – and an honour to witness it. 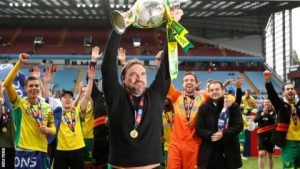 I was unable to make the game on Sunday, and due to my exile from the Norfolkian homelands, my following of events at Villa Park had to come courtesy of a certain goal show being broadcast by a certain corporation. (‘Unbelievable, Jeff!’, one might say.) Aside from the key moments from our match, one other moment particularly hit home.

As Wigan took the lead against Millwall, Jeff Stelling made a comment about it being a boring season by Wigan’s standards – it was the first time in years that the Latics had neither been relegated nor promoted. A simple observation I grant, but it struck me how that the reverse has been part of what’s made it such a special year for us – the excitement is back.

The football hasn’t always been pretty at Carrow Road over the last 20 years, but irrespective of the quality, I’d suggest that we’ve usually had something on the line – whether it was a play-off challenge, a promotion push, or fighting relegation. Since 2016, it felt like we’d lost our way; to invoke the spirit of the inimitable B. B. King, ‘the thrill [had] gone’.

I often recall an article in the EDP from the summer of 2005, as we were all regrouping after that debacle at Craven Cottage. (NB: it’s incredible to think how the whole of football has changed in the years since.) I think we can all remember the expectations of the club that season and an interview with Gary Doherty reflected that – his view was that players in successful teams should set themselves high targets, and so strikers should be aiming for 20-30 goals a season, midfielders 10-15, and defenders 5-10.

Alas, as we all probably all remember, that never came to pass for the class of 05/06, but the notion always stuck with me – and this time around, that mantra has come to pass. The goals have come in plentiful supply and from across the park. (Pukki, Vrancic, Stiepermann, Hernandez, Buendia, Godfrey et al.) It’s been a joy to watch, and that joy has been a key part of the club’s rebirth – a proverbial Canary from the ashes, so to speak.

Since Stuart Webber’s relatively unheralded arrival, the sterling efforts of so many has revitalised the whole club and brought a sense of togetherness that I’ve not felt in a very long time. Promotion is unquestionably a sensational achievement, and silverware to boot is a tremendous boon, but I’d say that getting our club back has been perhaps the most significant step of all – simply put, the thrill is back.

To everyone who made it happen – thank you.

I’ll conclude with a final nod to our history. I’m always one for looking to an overarching narrative, relishing quirks of fate etc, and there’s one that strikes me as particularly poignant:

In May 2009, we were in disarray and suffered arguably the lowest of lows in our history as we dropped through the trapdoor to League 1.

Ten years on, we’ve achieved one of our highest highs in decades, and we’re going back up to the big time – as a club united.

This truly is what it means to be a part of the Norwich City story – and I wouldn’t have it any other way.