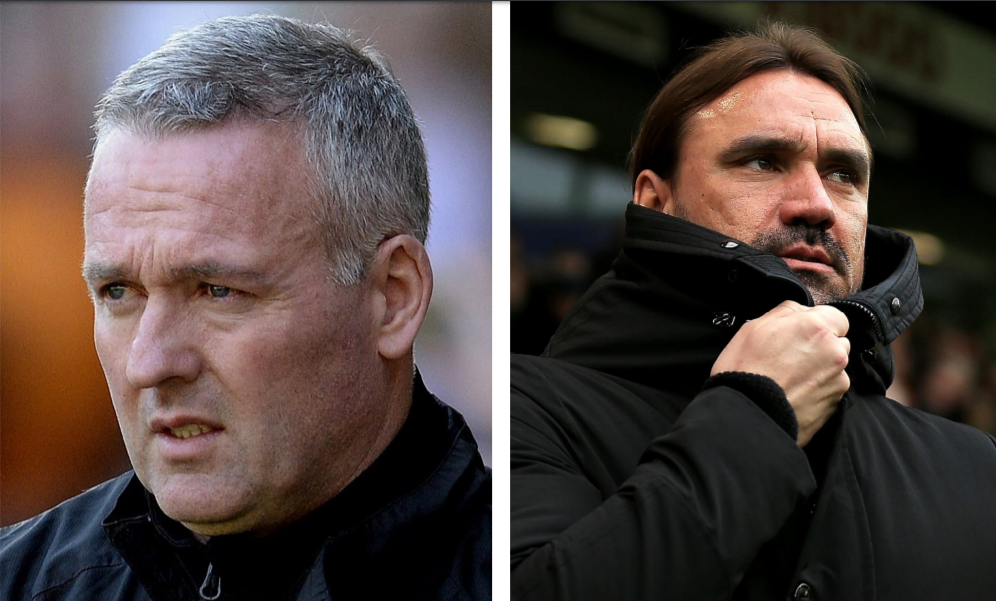 Amidst all of the recent celebrations there have been a barrage of interviews and vox pops with staff, players and fans giving their feelings about the club. One of the recurring themes was how eventful it is being a Norwich City fan, and the phrase that was used most often was “soap opera”. Which led me to wonder what a Norwich City soap opera would actually look like.

Ladies and Gentlemen, I give you…

[It is summer 2009, yet there are dark clouds in the sky. The Carrow Arms, recently got its worst ever hygiene rating from the local authority and has been downgraded by the brewery. The pub owners, Micky, a chain-smoking cockney, and Delia, a boozy, brassy northerner are discussing events.]

DELIA: Eee Kidda, it’s a reet $hitshow and no mistake.

DELIA: We’ve been too generous for too long. That last Landlord, whatsisface, four-eyed fella, face like a barm cake..

DELIA: That’s him. He were a nice bloke but he weren’t able to make us competitive with all t’other pubs.

DELIA: Ooo McNally. I like him. He seems a reet basssstaad. He’ll make some changes round here…

[Enter Nora Jaciti, Delia and Micky’s daughter, and barmaid at the Carrow Arms. She shuffles in morosely]

MICKY: Bleedin’ ‘ell Nora, you’ve not been going aaaat five minutes. And he’s got to be better than that Glenn feller…

DELIA: Eeeee, he were a reet basssstaad.

NORA: Oh, he’s much nicer than Glenn. But I just don’t think we’re right together. Maybe it’s because he’s an old family friend and I know him too well. Plus, I have to be honest… he doesn’t really know what he’s doing… you know… where it matters…

DELIA: But he’s such a lovely blerk. And he loves you to pieces. You, him, this place, you’ve all got t’same DNA…

MICKY: Well it is Norfolk…

NORA: And the other night, when that coachload from Colchester showed up, causing trouble, taking the pi$$, just humiliating us in our own pub. Bryan just stood there. He didn’t know what to do. I was so embarrassed…

[Enter McNally, a bullet-headed Scot with a smile on his face and a sock full of snooker balls in his back pocket]

McNALLY: Morning. Why the long faces?

NORA: What do you mean?

McNALLY: Told him to sling his bloody hook. Drove him doon te Cornwall, told him he wasnae good enough fer yus, and abandoned his bald arse there. He won’t be back any time soon.

NORA: I should be upset, but I must admit I’m relieved…

MICKY: It’s that geezer from Colchester that was here the other night!

[It’s now summer 2012. Nora has never been happier. Her and Paul have been together for three years and she’s deeply in love. Nora is in the bar. Paul enters]

PAUL: Nora, we have to talk.

NORA: (nervously) What is it?

PAUL: Look, I can’t fault your effort, you’ve been triffic for me…

[McNally bursts into the room]

NORA: [frantic] What does he mean Paul?

PAUL: Well you know we had that lot from Birmingham in at the end of the year…

NORA: I knew it! That tarty old slag in the claret and blue dress who kept singing your name at the karaoke. You haven’t Paul, tell me you haven’t…

PAUL: I have. Listen, it’s not me, it’s you. I know people usually say it the other way round, but it can never be me so…

[Winter 2015 – Nora has just split up with her latest boyfriend, Neil]

DELIA: Honestly Nora, I really dernt knurrr what you’re lewking for in a man. Granted, that Chris wasn’t right for you.

MICKY: He was a luvverly little geezer, but bored the arse off me…

DELIA: Oh God yes. And any time he got stressed he’d get so defensive.

NORA: All the pieces seem right with Neil. I’ve known him a long time, he’s always talking about me, great with kids, but… there was just something not quite right. He knew it, bless him, and called it off.

DELIA: You know your biggest problem Duck? He’s not Paul.

MICKY: You’ve got to move on love. He did the dirty on you, the slaaaaag.

NORA: But everything was just better with Paul. It was fun, it was sexy…

MICKY: HE NEVER LOVED YOU!!!

NORA: [sniffles] I know. He said he did, lots of times. But then he said the same to that Colchester bird too and he left her pretty quickly to get with me. I guess I shouldn’t be surprised when he did the same to me. Once a cheater…

DELIA: Yew need a nice blerk. Someone with a bit of testosterone like Paul, but who’ll treat you reet.

[Enter McNally and a stranger]

McNALLY: Did I hear someone ask for an aggressive, short-arsed, Scotsman? Meet Alex…..

[December 2018 – Nora is cleaning the windows in the Carrow Arms, whistling as she works]

DELIA: Eeee that’s champion. I was beginning to think he was just a rebound blerk after Alex, but you two seem really happy now.

NORA: Alex was a whirlwind romance. For nine months it was incredible. Then we had that overnight trip to the North East, and he was a changed man afterwards. We just lost our way from there. He was always tetchy.

NORA: Oh, he’s a sweetheart. We took things slowly for a year but now it’s really good. I think he may be the one, Mum.

MICKY: Do I have to start ordering bleedin’ champagne?

DELIA: Who are you looking at love?

NORA: You know that pox-ridden slapper down the road? Only moved a new fella in during the summer? Well it looks like she’s replaced him already! She’s moving someone in at any rate. Oh, looks like she’s bringing him in here.

[Binnella enters with her new bloke]

BINNELLA: Morning. Nora, there’s someone I’d like you to meet. I hope this won’t be… awkward”

MICKY: What are you doing wiv that slaaaaag?

PAUL: I love her. She’s been triffic for me. I got her in to give me a hand. Sorry Nora. I’m with Binnella now.