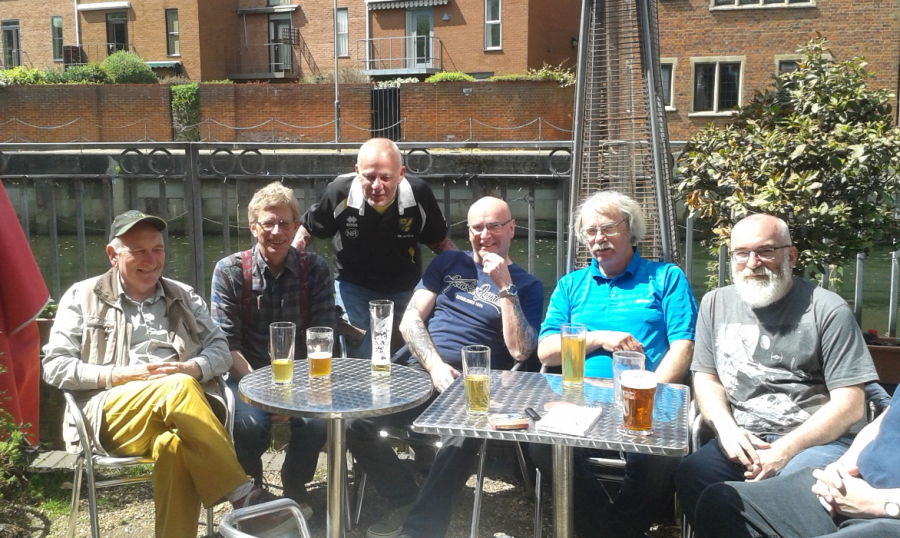 At the very end of the season there’s always an excuse to meet up with some NCFC mates in “off-duty” circumstances.

So, being a person who can extract a quote from an angry dragon I thought I’d meet some friends in the Ribs of Beef on Saturday to see what their personal highlights were from our terrific promotion season.

The atmosphere at the Ribs was excellent but slightly loud (probably us lot causing most of the noise) so I’ll do my best in terms of recall. I only had two pints so I’m pretty sure this is accurate.

Roops: Oooh-aah! Beating Millwall at home and getting that last-gasper against Sheffield Wednesday. I was so chuffed when Derby beat Leeds in the play-offs. Nobody would have lost that one but Leeds!

Cutty: Beating Leeds away. It seems like I watched Sky Sports just for that. I’m really happy. (Cutty and I then devolved into another discussion which certainly involved strategy but not in the footballing sense).

Tony, son of Cutty: Remember the season – Dad can’t even remember last week! (he sure can – Martin).

When we smashed Leeds away, I knew we’d go up and I got a Sky contract too. Mario Vrancic’s goals against Wednesday and Blackburn were beautiful. Utterly beautiful.

Bernie: The tone of the season was set for me when Onel Hernandez scored in the 2-2 at Birmingham. That set the pattern for the season. It was an impact moment and I knew the Kids were Alright.

The pub was so noisy that I asked Scott to write this himself, which he did, so this quote is verbatim: “Boxing Day. Notts Forest. 3-0 down and we came back to finish 3-3. The turning point of the season.”

We then moved on to other topics but not before we had discussed the Stuart Webber situation.

The last word goes to Tony: why would Stuart Webber want to leave Norwich?

Tony mate, I hope you’re right, I really do.

And thanks so much to the excellent bartender at the Ribs who took the pic for us.