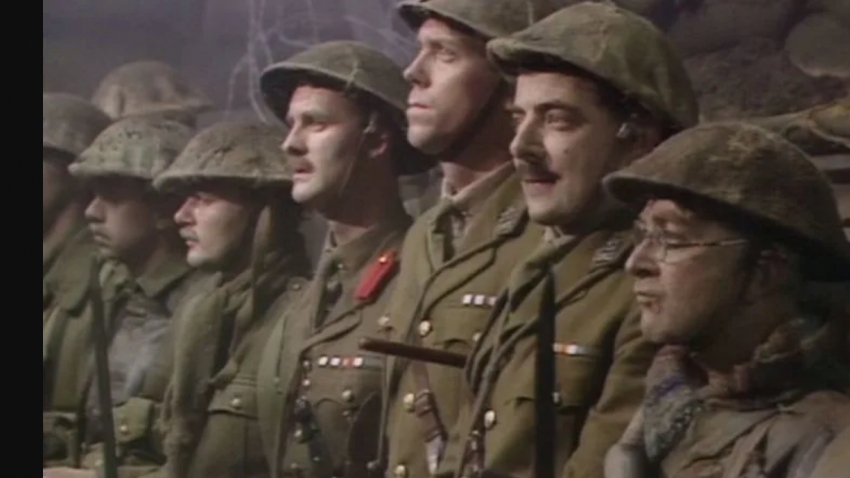 I guess relatively few of us will remember last off-season’s MFW music week. I do because I was quite involved with it and we had some fine contributions from readers and writers alike. Well, this time around we’re collectively going for a TV week.

One of the greatest things about this site is that we have folks of all ages as regular creators and consumers so as a relative oldie I’m not going to steal any thunder from the younger generation and instead just recall my adolescent memories. I was born in 1957.

No, I don’t remember Muffin the Mule – and no unwarranted comments on that statement please.

When I was a tiny, TV was solely B&W. Andy Pandy, the Woodentops, the Sooty Show. And Doctor Who (William Hartnell version) on a Saturday. I knew the Daleks weren’t real, even then. Hide behind the sofa? Only if the old boy had the bottom-ache. Which he sometimes did.

Then probably a tea of fresh shrimps, celery, salt and crusty bread (was I spoiled or what?) before watching Cheyenne starring Clint Walker. My dad loved Westerns. And the Flintstones.

There was also the small matter of the 1966 World Cup – Dad changed his police shifts with his non football-loving colleagues so he and I could see every single game together. And we did. Including the final.

Any boxing match would be watched. I loved them all, especially when Clay/Ali won, which he seemingly always did. Dad was into Sgt Bilko (aka the Phil Silvers Show). I didn’t get many of the in-jokes but loved the interplay between Bilko, Col. Hall and Dobermann, even then.

Till Death Us Do Part was the most divisive programme in this young Penney’s household. My mother loved every racist word of it while Dad got the concept straight away and took the time to explain to me what it was really all about. I had the great privilege of interviewing show creator Johnny Speight at his Leytonstone home many years later. I loved Steptoe and Son too.

And the moon landing live in the middle of the night. Sorry conspiracists I believe it happened.

Frankie Howerd in Up Pompeii was also a source of great amusement to the young me although I doubt I would laugh at it very much now.

Seeing Diana Rigg as Emma Peel in the Avengers kind of awakened the boy if you understand my meaning. I also loved The Saint and The Persuaders. Not because I had a Roger Moore fixation – they were great, if retrospectively cheesy, programmes both. Tony Christie belting out In the Avenues and Alleyways? Top cheese.

There was also Rowan and Martin’s Laugh-In, followed relatively soon afterwards by Monty Python. So sublime that our very own Stewart Lewis can write about it better than me. And he will. As long as he mentions the homicidal maniac with a bunch of loganberries during the “how to defend yourself against fresh fruit” sketch I don’t mind ducking out.

I’ll let Orlando (Sam Kydd) and Do Not Adjust Your Set (David Jason and Denise Coffey) go. But I liked both. Stuff Blue Peter.

Top of the Pops always bubbled along in the background. I never realised at the time how important my memories of that and the Old Grey Whistle Test would eventually become to me in later life.

I’ll now simply produce a list of what I have liked as an adult and then it’s over to you folks to have your say.

Catweazle, Minder, The Sweeney. Special Branch. Happy Days. The Muppet Show. Late night B&W 1930s horrors like the original Frankenstein and Dracula. Every single episode of Only Fools and Horses.

The Snowman complete with David Bowie intro, Tom and Jerry, The Children of Green Knowe, Taz animations, particularly those with Didgeree Dingo in them and Dick and Dom (all of these watched with the kids of course). Really.

Also MotD of course. Although we as Norwich rarely featured.

Father Ted (who could ever forget the Kicking Bishop Brennan up the Ar$e episode), Fawlty Towers and Blackadder go without saying. As does The Young Ones, Bottom (Hotel Paradiso is up there with the very best) and Red Dwarf.

I was once in a quiz team in a pub and when asked for our collective name my mate Steve H decided on Scumbag College. And we somehow won.

We’ve come a long way since Spotty Dog broke a string on the Woodentops.

Over to you guys – what do you reckon?