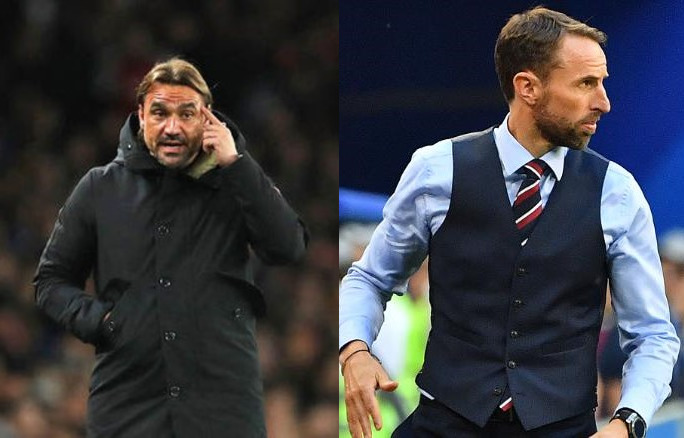 You know the scenario – happens all the time. Pop out, bump into a friend, quick chat, entirely about Norwich City, 100%, not even getting to the bit when you inquire as to each other’s welfare.

Well that, yesterday morning… in Beccles.

And in that short time, we predictably managed to hone in on City’s chances of survival next season, their style of play and how it compares to Gareth Southgate’s England – especially the thorny issue of playing the ball out from the back.

Obviously, it was John Stones and Ross Barkley who were centre-stage in this debate, with the calamitous Kyle Walker not far behind, but for those of us who have lived and breathed Farkeball for the past two seasons, it was a discussion point that has become all too familiar.

My reference point is always the River End – because that’s where I sit and where there is still more than a fair sprinkling of the “get it forward” brigade – but it seems the ‘get rid’ philosophy is one that prevails in pockets all around Carrow Road.

I’m almost certain there would have been pockets of England supporters in Guimaraes on Thursday night who were also encouraging Messrs Stones, Maguire and co to stop taking risks and get it forward.

It’s a debate that’ll be never-ending. Gary Neville picked up on it even before the England game had finished and continued it in heated fashion with Jamie Carragher afterwards, with Neville throwing his weight behind the ‘mistakes will happen but that’s no reason to stop doing it’ school of thought.

Neville is, on this occasion, right in my view. A philosophy that’s been nurtured for years and incrementally embedded over a couple of seasons as the players take on board its key principles is for keeps. Because it went horribly wrong in one particular game, for a host of reasons, is no reason to question its validity – unless your name is Sam Allardyce.

But why do it in the first place? What are the benefits of playing the ball out from the back? What is it that Daniel Farke, Southgate and Pep have against a bit of Pulis-ball?

Well, while I don’t possess any UEFA coaching badges, for me, patiently working the ball out from the back enables the team to build up play as a unit, with support and options available at all times. Players make angles and the player on the ball, in an ideal world has options forward, sideways and backwards.

It’s incumbent of course for the player, in a split second, to make the right decision, This is where it went wrong for a fatigued Stones – an easy pass back to Jordan Pickford would have enabled him to make an angle and receive it back – but this is the risk/reward element to the philosophy. So much is asked of the centre-backs and goalkeepers, mistakes will inevitably occur and cost goals.

The reward comes from doing it well, with the short passing through the thirds enabling your team shape to remain compact and not stretched – something that will be especially important in the Premier League. The Allardyce alternative is a long ball to a striker who wins the knockdown, and you go from there. It gets you down the pitch but can isolate the ‘big man’.

Equally just ‘getting rid’ when the high press comes rarely achieves any objective, especially when the team and its personnel are not equipped to go long. The argument that it gives the defence a ‘breather’ and a chance to get its shape back is flawed, as nine times out of ten the ball will come straight back. It becomes a game of just clearing your lines, rather than looking to start an attack.

The Allardyces, Brazils and Pulis’ of this world will argue that defenders are there to defend and should clear their lines, but Farke-ball demands so much more. Defenders (and goalkeepers) need to be comfortable in possession and as adept at passing the ball as they are at tackling and heading (and making saves).

As Southgate highlighted after Thursday’s game, and as both Farke and Stuart Webber stated during the season, the demands on the defenders and goalkeeper are considerable, and so it’s important those players know they will be judged gently if errors occur.

There will have been no flying teacups and brickbats for Stones and Barkley – just an arm around the shoulder and a reminder about good decision making because that’s what it boils down to. The philosophy is embedded – for City and England – and until an alternative regime takes over years down the line it’s not going to change.

Of course, the starting point is either developing or bringing in individuals who are equipped to play this style – and then allowing the coaches to make it second nature to them – but then also to put faith and trust in those players to deliver it.

But, as we discovered in Farke’s first season, it is a difficult balance to strike. There is a risk of being over-cautious and also overplaying when in possession of the ball in defence, but if the end objective is never lost it’s a highly effective tool in breaking down teams who sit deep in compact lines and those who deploy the high press.

The Premier League will naturally stress-test City’s ability to play this style to the limit – especially when we face the likes of the new European champions (eugh) whose modus operandi is built around a sophisticated, high-energy, high press – but it’s that trust Farke and co have in the players that will see them overcome the hurdles.

And the fields of Colney will be echoing to Germanic tones, drilling into platers old and new the way in which this style of play can be used effectively against top-tier opposition.

Every team deploys the press differently, some won’t deploy it at all, but one thing we do know is that Tim Krul, Max Aarons, Jamal Lewis and whichever pairing of centre-backs get the nod, will be extremely well versed in what to expect and how to overcome it. So too the central-midfield pairing, whoever they may be, who play an equally important role in getting that ball moving.

So, the playing out from the back is here to stay – for both City and England – and there will be cock-ups down the line. But let’s trust those in charge to ensure the rewards ultimately outweigh the risks.