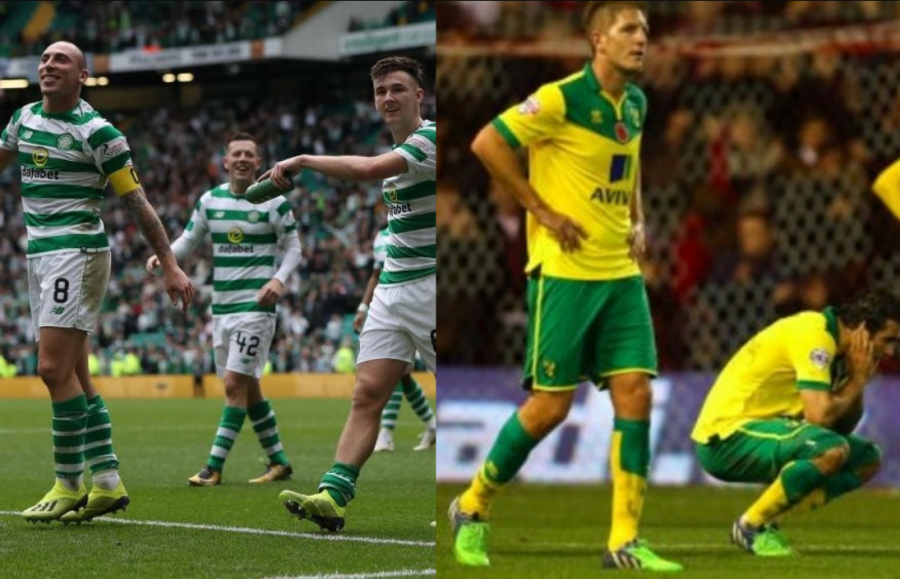 I’m pretty sure Stuart Webber would never let that occur, and we’ll never again – at least while he’s around – have summer-long fiascos akin to the successful pursuits of Robbie Brady or Gary Hooper and the unsurprisingly futile attempts to sign Toby Alderweireld, Ola Toivonen, Fabio Quagliarella and co.

My god, they were painful – even those that did come to fruition.

Also, in hindsight, it’s obvious that Turnbull was never destined for Norfolk, not really, even though he may (or may not) have tentatively headed south with his agent to hold talks. It was all just part of a canny game of poker.

To have turned down Celtic was a brave move in the first place as destination Parkhead appears the ultimate goal for those with talent north of the border – ahead of earning a place in the Scottish national team – but his apparent flirtation with Premier League and Championship teams appeared to have been just part of his agent’s masterplan.

Interestingly, it did, in the interim, see us yet again incur the wrath of Celtic fans who were aghast that anyone who’s on their radar should be linked with little old Norwich City.

Yet again, we were reminded how massive they are and how a move to Norfolk would be a retrograde step for the player who would almost certainly be blessed with medals, trophies and European football if he headed to Glasgow.

And, to be honest, they’re right. Now the move has gone through, they may as well award young Master Turnbull his Scottish Premiership winners medal 2019/20 when he signs his contract. Because they will win it, and probably the Scottish FA Cup and League Cup too.

In that regard, there’s no point in us going toe-to-toe with Celtic – a bit like when our friends down the road play the ‘major honours’ card. If we head down the number of trophies and “history” route, we’ll lose. Full stop.

Celtic’s roll of honour is thus:

An impressive list in anyone’s book, in particular the last one, which was achieved by a 15-man squad of whom all but one were born within ten miles of Celtic Park. It was also the first time a British club had won the trophy. The Lisbon Lions will be forever lauded and remembered, and rightly so. They are indeed a group of heroes to be extremely proud of.

Our roll of honour, by contrast, is by our own admission rather less impressive:

Yet, and we’re quite proud of this, we did participate in the 1993/94 UEFA Cup (one for the Ipswich fans), and we have our own, more modest, equivalent of the Lisbon Lions in the form of the 1959ers – heroic but beaten FA Cup semi-finalists.

I should also add, if we were to enter the Norfolk Senior Cup every season, I’m fairly confident we’d have more than 50 to our name by now, but if they’re going to slap us around with the actual number of trophies won, there’s only one winner.

And then we get to the always thorny subject of size.

Again, that Celtic are “massive” is not in question. They have, according to Wikipedia, a fanbase of nine million worldwide, which includes 160 supporters’ clubs across the globe. Apparently, when they played in the 2003 UEFA Cup final, no less than 80,000 fans descended on Seville. They have a stadium that holds 60,000+ supporters and their average gate last season was over 57,000. All that is irrefutable.

We, by contrast, have a stadium that holds 27,244 and last season averaged gates of just over 26,000. We describe ourselves as massive occasionally but we’re really not, especially when compared to the likes of Celtic or (sorry) Rangers, or any of the top six in the Premier League.

But, here’s the thing… on opening day of next season, the carrot-crunching upstarts play Liverpool at Anfield. And Celtic? At home to St Johnstone.

After Liverpool we have Newcastle, Chelsea, West Ham and Man City. Celtic have Motherwell, Hearts, Rangers and Hamilton – and while no-one is arguing over the intensity and stature of the Old Firm derby, these occur only four times a season, cup games notwithstanding.

So, of course, Celtic are a bigger, more decorated club than City – to argue otherwise is plain daft – and they do have an outside chance of making the group stages of the Champions League, but with us now in the Premier League, we surely win the arm-wrestle over whose domestic campaign offers up the greater challenge.

For players looking for to progress who have Hoops and Canaries as suitors, it’s really a question of first-team opportunity, medals and European football versus the prospect of playing on the biggest stage against the best players in the world on a weekly basis.

For this squabble to flicker into life every time the words Celtic and Norwich appear in the same transfer rumours article just gets a little tiring… especially when both clubs have much to be proud of, but are both, in different ways, limited by geography.

But anyway… good luck to David Turnbull – regular first-team football, trophies and probably an extra couple of Gs a week are clearly dear to him and his agent, and that’s fair enough.

As mentioned earlier, I suspect he was never destined to be a City player and always destined to be a Bhoy, but the bluster from north of the border that followed his initial refusal did at least serve as a sharp reminder of where we sit in football’s natural order.

But it wasn’t needed. We know our place ?