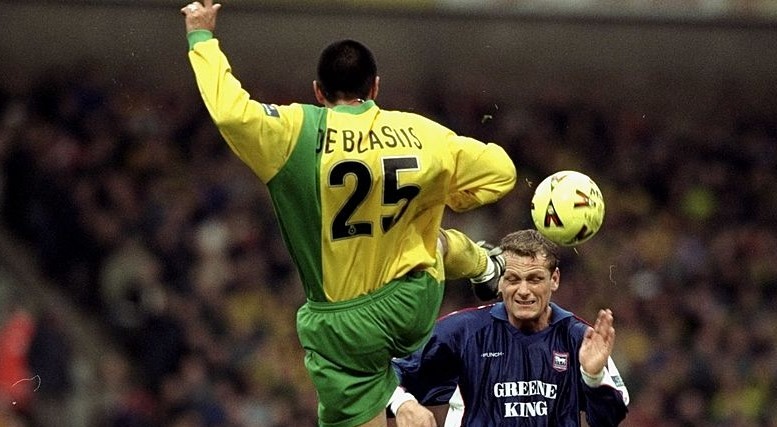 Today it’s the turn of exiled Canary Martin MacBlain, who made the schoolboy error of commenting on an MFW article with eloquence and in a way befitting someone who could string me a thousand words together. So, over to Martin…

Well, after years of reading fabulously well-written articles on here, I now find myself in the unenviable position of trying to match the quality of writing of the fantastic MFW authors. And do you know what, I can’t bl**dy wait.

A remarkable thing has slowly and steadily been happening at Carrow Road. You can’t get a seat.

I think, in these halcyon days of ‘Farkelife’, possession-based football, full houses and incredible independent supporters’ groups, that’s it’s very easy to forget the depths we plummeted before the highs we’ve reached. And in no way am I referring to League One.

I wanted to write my first article about the time I was physically closest to Norwich City: 1998-2002. I believe that my time living in and watching Norwich live was, for me, the lowest of the low. Rock bottom. The bottom of the bell curve. And to enjoy the current highs – we have to go back to the lows. ‘My time’.

My aim is to write a series of articles conveying my nostalgic memories as firstly a teenage exile and then subsequently a student at UEA, from the post-Chase era up to the play-off final. Insipid, dull forgettable years to most… but, this season excepted, my favourite time supporting City.

My father relocated us to Glastonbury, in 1987 from Aylsham. I was seven, I had a vague awareness of Norwich City, John Bond and the League Cup Final, but my interest in football didn’t really manifest itself until after the 1990 World Cup and more specifically, I didn’t fall in love with Norwich City until 1992.

I spent the next six seasons (yep, I now map my life in seasons – easier when your profession is that of a teacher and your working year mirrors the football calendar) studiously following Norwich City through Ceefax, and I could not wait to get to UEA (1998) so I could finally get to see Norwich play with something approaching regularity.

What followed was three years of dull football, low attendances, yellow shorts, disquiet in the crowd, apathetic players and my first experiences of listening to Canary Call. In my mind, the darkest days of the club.

Yet, every August, I believed, I genuinely believed this would be our year. I don’t know how many readers ever reflect back to that period. A sequence of mid-table finishes, no cup runs and very few stand out fixtures. All very forgettable.

I do wholeheartedly consider that ‘my time’ was the depths we plumbed. The lowest the club went. Yes, even more so than relegation to League One and more so than the Chase Out and post-Chase eras, because on those occasions there were different supporting factors surrounding the club. In the post-Chase days we still had some excellent players we could rally behind (Ian Crook, Robert Fleck, Andy Johnson) and in the 2008/09 season – and League One – we had full houses. Attendances to make the Carra roar.

Yet in those dark dark years during my time at UEA, there really wasn’t a lot to get behind. Yet I did. Every week. Every season. Every new transfer was viewed as the one that would catapult us to the top six. I extolled the virtues of Jean Yves De Blasiis. I ‘knew’ Cedric Anselin would be the tricky winger to complement Eadie and I believed Brian McGovern would be the new rock on which we could build our defence.

Each game was ‘winnable’. Even when I watched a Stan Collymore inspired Fulham tear us to pieces in 2000 and marvelled at the strength and speed of their squad compared to ours, I still held onto the fact we could make the top six.

Even when we languished in 13th spot, I would count the points to 6th and think, that’s only four wins away – Adrian Coote will fire us up there… Rioch is our saviour, no, it’s Hamilton… surely Worthington must be the man to take us up (prophetic as it would later transpire).

It truly was the best of times – the worst of times.

I think in order to understand and appreciate the ‘highs’ that come with supporting a club and to understand where we are now, one truly has to go through the dark times. The lowest ebb. And it’s with a delicious sense of irony, that I find my lowest point of supporting City, also the point that’s closest to me.

It wasn’t until after I graduated and took a year-long job at a hire car company on the Airport Road in September 2001, that something began to rise from the ashes. The Phoenix from the flames. Attendances started to grow. Games started to be won more than lost. New heroes began to emerge, and the club reached the playoffs.

I couldn’t get the time off of work to queue for tickets to the playoff final, but I can pinpoint that exact moment as the turning point of the club. As since then, Carrow Road has been almost always full, despite subsequent fallow years, the fans have gone in their numbers culminating in today’s nigh on impossibility for a long-time supporting exile to get to a game.

I shall leave you with a quote that I think sums up ‘my time’, rather well.

‘If you want the rainbow, you have to deal with the rain’

And when I think to Oxford at home in 1998… well, let’s just say we got more than a little wet.

On your Neck, City!@OnYourNeckCity·
59m