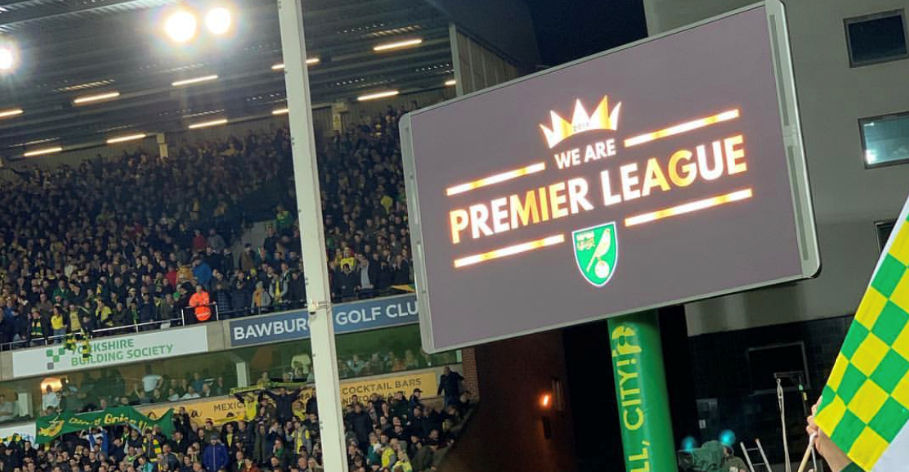 Amid all the natural euphoria over the last few weeks, there were two lines that struck a chord with me.

The first was delivered in a Mick Dennis look-back when he cited City’s sporting director Stuart Webber as saying that Emi Buendia first popped up on the radar via the club’s data analytics team. The young Argentine – now armed with a new, five-year deal on the back of last season’s heroics – didn’t arrive at his desk via an agent’s video or a scouting report from the nether regions of the Spanish Second Division but as a statistical anomaly, a number that stood him out from the crowd.

The second line was a more general lament from Stewart Lewis that last season wasn’t a Hollywood movie script; that City’s ride to the top of the Championship pile was a film-maker’s dream – if only there had been someone there to record it.

Put the two together – Buendia’s unusual route to Norfolk and City’s promotion story being the stuff of the movies – and I think you can find a movie that charts the City story as well as any and that movie is Moneyball.

Moneyball is a baseball movie – one that tells the true-life story of the Oakland Athletics’ record-breaking 2002 season.

At the start of the campaign, the As’ general manager Billy Beane – played with beautiful understatement by Brad Pitt – is forced to watch his star players – Jonny Damon, Jason Giambi and Jason Isringhausen – leave for the fatter wage packets of the bigger clubs. Think James Maddison. There is an inevitability to certain player moves.

And the As had fallen foul of three of them. The question now was how could they ever compete when it came to finding replacements.

And the answer came by playing the numbers, doing the research data-wise on the players that made a difference.

In this quest, Beane recruited a Peter Brand, a young Yale economics graduate with radical ideas about how to assess player value and together they ripped up the rule book in terms of scouting and recruitment practice and handed the head coach the template for a winning side.

Needless to say, opposition was fierce as Beane and Brand brought some of the league’s bigger misfits to the fore and demanded they be given another opportunity. Much in the same way that many would not have given Teemu Pukki another look after his underwhelming spell at Celtic, so unorthodox pitcher Chad Bradford, the ageing David Justice and the injured Scott Hatteberg were recruited into the fold.

Suddenly on-base percentage (OBP) was king; the head scout was fired as his dissent mounted – recruitment was to be done the Beane way. As losses mounted initially so it required a considerable act of faith from the As’ owners to stick with the plan, but their reward was not long in forth-coming as the As’ went on a 19-game unbeaten sequence to tie the longest winning streak in American League history.

Beane never watched the games. For the 20th, however, he is persuaded to watch the match unfold by his young daughter.

From 11-0 up at the end of the third inning, the As let the Kansas City Royals back into the game to tie at 11 a-piece before a walk-off home run by Hatteberg sees Oakland home for a record-breaking 20th consecutive win.

The team of misfits – brought together by the data science geeks – were walking it and the rest of baseball was forced to sit up and take notice. Just as the rest of football might have woken up to the ‘Norwich Way’ this summer.

It is not long before the big boys come a-calling. Beane is courted by the Boston Red Sox with an offer to become the highest-paid general manager in the history of the game; he turns it down preferring to stay close to his family on the West Coast.

The Red Sox take up his ideas anyway and duly go on to win the 2004 World Series.

It is not all about the data. It is also about not being a d1ckhead; the no d1ckhead rule was enforced mid-season at the As as one-star hitter enjoyed one too many a Vegas party and was promptly shipped out without much ceremony.

It is a rule that Webber and Co appear to have valued above all others as the Class of 2019 deliver the goods on and off the field.

And the system appears to be underpinning transfer-policy to this day. Someone will have crunched Patrick Roberts’ numbers and liked what they saw – his possession stats, his pass completion rate both conspiring to put the loan wheels in motion.

It is a fascinating parallel. Between the worlds of pro baseball and pro soccer; between what mid-sized clubs have to do to compete with their bigger city rivals.

And the As’ model doesn’t really account for home-grown talent – their success wasn’t in part founded on bringing the likes of a Max Aarons or a Ben Godfrey through to the ranks of the first team.

But could Billy Beane be Stuart Webber? For sure. And will the equivalent of the Boston Red Sox come a-calling – particularly if Norwich hold their own Premier League-wise this season. For sure.

Beane turned the big money down. Somethings money just can’t buy. Whether the same proves true of Webber only time will tell.

But Norwich City have had their moment of Hollywood fame; their story has already been told.

You just need to know where to look.