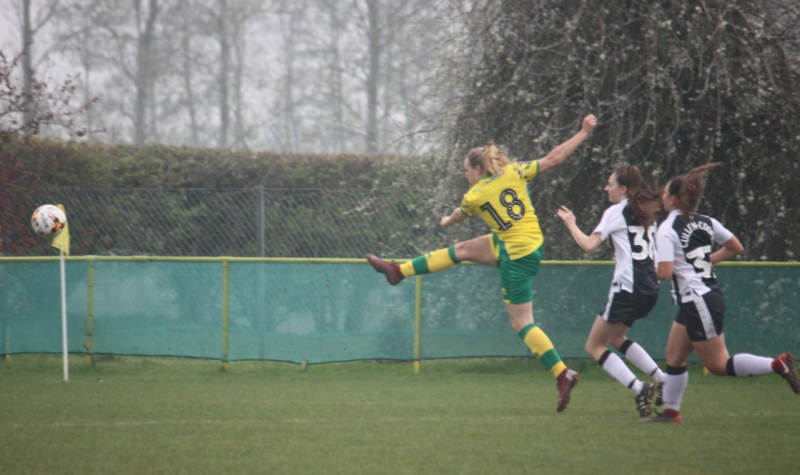 The Lionesses may have fallen at the penultimate hurdle, but the Women’s World Cup was still an undoubted triumph – even though VAR did its worst – and did a great job in raising the profile of the women’s game.

The trick, as ever, is to lock in that interest and prevent it from being something that spikes every summer around the time of the European Championships and World Cup but then dips in between.

There’s also a need for that interest to go beyond the elite level and filter down the footballing pyramid to the grassroots of women’s football.

So, this season – in addition to reporting and commenting on the club’s return to the Premier League – MFW will also be devoting some of these pages to Norwich City Ladies FC. We plan to have updates on the ladies’ progress in the FA Women’s National League Division One (South East) and, at some stage, Connor and Ben will be weaving some of their YouTube magic and producing a documentary.

So, to kick-start it all and to find out a bit more about our very own ‘Canary-esses’, I’ve been chatting with Ben Gilby, the club’s Media Officer, who’s been giving us the low down on all things Norwich City Ladies FC.

So, what is your personal involvement and how/why did you get involved?

Ben: Like all of these things, it was never planned! As a Norwich City supporter based on the Surrey/South-West London border, I’m always on the lookout for the fixtures of the various Norwich sides to see when they are playing near me.

With AFC Wimbledon Ladies in the same division as Norwich City Ladies and playing their home matches at Carshalton Athletic FC, about twenty minutes from my house, it was a no brainer to go and support the team one Sunday afternoon.

The Norwich team put up a magnificent performance and gave it a hundred percent for the whole ninety minutes, simply refusing to accept defeat at any point. That allied to the high quality of the football made me really proud of our women’s team.

I have done voluntary media/web manager roles in sport for quite a while and been the programme editor of a South-West London based National League rugby union team for a number of years, and I had already decided that last season was going to be my final one in that role, therefore I would be free to do a media officer role for Norwich City Ladies from May 2019.

I offered my services and the club accepted, and now it’s full steam ahead for the coming season.

How did last season go? Does the club have realistic ambitions to make it beyond the fourth tier and, maybe, to the big time?

Last season was one which showed huge promise for the team, which fielded quite a number of young players at times. The headline, of course, was achieving the league double over Ipswich Town! Towards the end of the season, there were a series of matches where the promising level of performance from the team wasn’t rewarded by results, and we went into our final league game at home to Billericay Town needing to win to ensure our place in the National League Division One South-East for another season.

A fantastic come from behind victory showed the potential and belief in the squad and we’re looking forward to the challenges of the new season.

Another real bonus last season was the launching of a Norwich City Ladies Development squad, which provides not only a pathway to the first-team from girls football, but also an opportunity to players not playing first-team football to regularly play competitive matches for us and have the chance to catch the eye of the coaches and play first-team football.

The Development team play in a tough Reserve league facing the likes of Tottenham Hotspur, but it is a fantastic opportunity to develop our really promising youngsters further.

Naturally, in the future, it would be great to have Norwich City Ladies playing at a higher level. It’s worth remembering that there’s only one promotion spot available from this division. I think success will come incrementally as the youngsters, guided by some really talented more experienced heads develop their ability further.

Slow and steady wins the race, but we’ll get there – better to achieve success gradually and be ready for it than going all out and it falling apart at a higher level.

What needs to happen for the club to get to the next level?

Someone once said to me that a successful club needs to have an off-pitch set up a couple of years ahead of where they are on the pitch to ensure that when promotions arrive they are sustainable. Those, I feel are very wise words and we’re definitely making progress there.

Our highly promising squad also need time to get greater experience, and it’s important to remember that this will only be the second season of our Development squad, which is vital to bringing players through.

Obviously, even more sponsors would help – we already have some fantastic ones, but we are always looking for more to join the Norwich City Ladies family. It is important to remember that Norwich City Ladies are entirely run by volunteers – the players all have jobs or are students and the coaching staff and committee all work full-time as well.

The Women’s World Cup has given us a fantastic opportunity as the highest placed Norfolk Women’s side, our #MeetOurTeam social media campaign ran throughout the tournament, and continues to run still, is a huge success.

We have high hopes that this will not only attract more supporters to our games but help foster greater awareness about Norwich City Ladies. More youngsters coming to watch us, we hope will result in more girls wanting to play for the younger age groups who can then come up through the system to represent the senior team.

We have a great Norwich City Ladies family, and one which is very excited about the new season.

Give us a quick run through the star players and who we should look out for this coming season?

They did this as well as representing the senior Norwich City Ladies side – so that is a real statement of the promise we have in our ranks. Our captain Millie Daviss is only 20 but has such an intelligent head on young shoulders, it was no surprise she was named Player’s Player of the Year.

The Lionesses and the Women’s World Cup in general, have been great for raising the profile of the women’s game – and there’ll clearly be momentum going into the new season – but how, in your opinion, can this be seized upon to ensure the impact is long-term?

Long term we need to continue promoting our team and getting the word out through as many routes as possible. It’s all about more people coming to the games and spreading the word. The potential is there at the club without any doubt.

We have to use the World Cup to get more people on board locally to see what a fantastic product we have. Once they come to a game, if my own experience is anything to go by, they’ll come back again!

Previously, Norwich City Ladies have probably the less known about part of the club. That will change! Quite simply come and watch the team play, cheer them on and get involved!

Do you have players at NCLFC who have aspirations and the ability to test themselves at the highest level?

The ability is and aspiration is absolutely there. We have a good number of players who are capable of doing great things in the game – obviously, we’d love them to do it with us!

What are the realistic aspirations for the club this coming season?

Our head coach Greg Dimsey did an interview with me last week saying he was aiming to finish in the top six this season and have a good run in at least one of the cup competitions.

Our players have more experience now and I’m confident that the narrow or late defeats that hit us at times last season are now a thing of the past. Even more supporters roaring us on at home games would help the team – and, of course, we’d love to do the league double over Ipswich Town again!

Perhaps you could tell the MFW readers where they can read more about the team, where they play and when they can see their upcoming games?

Until a permanent web presence is finalised, I’ve put together a temporary website on Norwich City Ladies FC, which can be found here: talesfromtheriverend.wordpress.com/norwich-city-ladies-fc . It is updated several times a week with news, features and reports.

Home matches during the league season are played at Norwich United FC’s Plantation Park on Sundays with kick-off at 2pm. At the present time, our league fixtures have not been announced by the FA Women’s National League, and I don’t expect them for another fortnight. As soon as they come out, there’ll be a posting on the temporary website.

We do have a full programme of pre-season friendlies –

Cheers for that Ben… keep us posted.

Leave a Reply to ABC (A Basingstoke Canary) Cancel reply