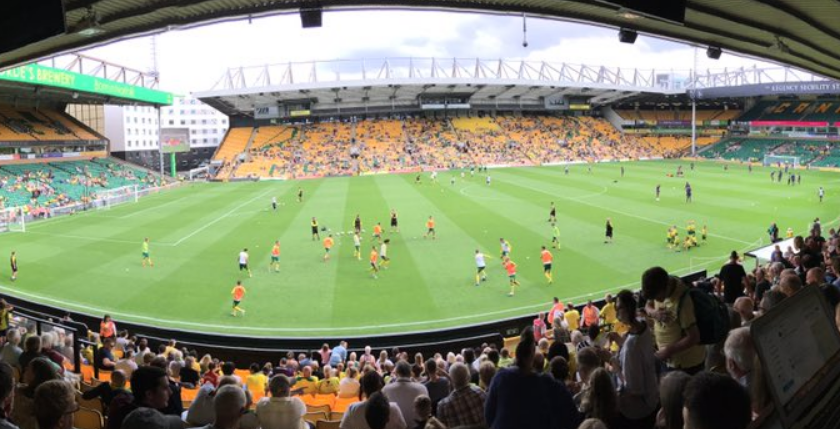 After Tuesday night’s humbling defeat to Italian Champions League debutants Atalanta, Daniel Farke would have demanded a reaction from his Norwich City side ahead of their Premier League bow on Friday night.

The nature of how the Italians put the Canaries to the sword will have disappointed Farke, especially after a promising opening period where City’s intricate passages of play were matched with an intense and collective press.

How they manage to pick themselves up from such defeats will be pivotal to their hopes of survival. Togetherness was an essential characteristic within this squad during the last campaign, contributing to late goals and resilience that needs to be carried into the Premier League.

What was recognisable yesterday was the formation in which City operated.

During the last campaign, Farke deployed a 4-2-3-1 formation that included swashbuckling full-backs and, essentially, three attacking central midfielders, with a reliance on those three receiving the ball on the half-turn and Teemu Pukki attacking the space down either channel between centre back and full-back.

Toulouse’s lack of pressing in the opening period invited City to stroke the ball about with confidence, but the big test would be whether in those circumstances the Canaries were capable of harvesting genuine chances.

In order to do so, they were tasked with deconstructing a compact, low block from the French side, and this is when the magical boots of Emi Buendia will hopefully come into their own this season; cute in possession, mainly when playing the thirds to locate that line of offensive talent, spearheaded by Pukki.

In contrast with the midweek game, yesterday there was a greater onus on how City acted in possession of the football.

Tuesday’s fixture may have taught City some significant lessons, given the way any degree of structure evaporated, and that arguably makes yesterday’s clean sheet the biggest plus from this performance.

With a mini-injury crisis on the eve of the Premier League Season, with Christoph Zimmermann and Timm Klose absent, it appears the make-up of that backline will involve Grant Hanley.

Hanley offers an intriguing dynamic to the side in that his core defensive component is his efficiency which sits nicely alongside his Premier League experience and his physical and commanding presence in both penalty areas. His distribution remains the one potential issue for the Scot and may explain why both Zimmermann and Klose appear ahead of him in the pecking order.

City opted to deploy Tom Trybull in that deeper holding position, almost as a bridge between Hanley and the midfield phase to ensure those passes were accurate and which allowed them to develop passages from the heart of their defence.

Trybull though is operating with several question marks against him, highlighted all the more by Farke’s admission that Norwich wouldn’t, beyond any late surprises, be recruiting anyone else this summer.

That defensive midfield position is one that has caused concern in some quarters.

Trybull now has to prove that his talent can leap up a division. His City career came about as a result of him being disregarded elsewhere, so hunger will be a keyword in his vocabulary. But desire alone doesn’t win football matches.

The biggest question that remains hanging over this starting eleven is around its top-level quality. Last season was a historic one and supporters will be hoping it’s an omen and not a glass ceiling.

Since the start of this bold redirection under the stewardship of Stuart Webber, the journey hasn’t involved loosening the purse strings but instead astute recruitment in pools other teams don’t search in. New contracts and deserved bonuses have eaten up a sizeable portion of the Premier League budget, as well as training ground improvements.

But, unlike most of their competitors, they possess players not yet operating at the peak of their powers.

The plethora of young talent available to Farke will go on, at some point, to break records in terms of transfer income for the Canaries.

Therefore, to have spent masses on new talent would merely have disrupted the dynamic and culture they’ve worked tirelessly to construct. In a market where Championship players are being valued at £20 million, City have provided a refreshing alternative to the status quo. Conventions and stereotypes don’t sit well with Stuart Webber and he’ll have fire in his belly to prove the doubters wrong.

Sheffield United have purchased Oli McBurnie for £20 million, with Brentford’s Neal Maupay was being valued at a similar price. But without spending £20 million, City already have the Championship’s Golden Boot winner, and therein lies the difference in approach.

Everyone knows City’s philosophy, and spending megabucks on talent doesn’t fit into this. But this is Norwich’s way, and that won’t alter regardless of the make-up of the Premier League table.

The debate between Tim Krul and Ralf Fahrmann rumbles on, with both getting a half each yesterday.

Fahrmann came from Schalke with a glowing reference and plenty of pedigree and know-how. To date though, he has flattered to deceive, particularly in possession. On numerous occasions yesterday, the German opted to pass the ball into difficult situations, unnecessarily putting his team-mates under pressure. But possessing a technical ability to break the press is an essential component in this City side.

Contrast and compare the two contenders, and Krul comes out the victor using the evidence of pre-season.

Krul played with greater assurance and more confidence, commanding his area and providing a vocal reassurance to the youthful backline. Fahrmann will push Krul for that jersey though and competition is a healthy aspect of getting the best from whoever occupies the position.

And that’s bound to provide some compelling viewing throughout the season.

So, the real stuff begins now.

Premier League fixtures don’t get much more daunting than a trip to Anfield on opening day, so every ounce of togetherness, resilience and quality will be tested.

Norwich embark on this journey with a team brimming full of pace and athleticism. Whether they opt to press and seek high turnovers or retain their natural desire to be the protagonists, they have 38 games to prove their worth to the division.

It’s finally time to find out what the Premier League holds, and whether City have the resolve to compete within it.

Reserve judgment until the window is closed, of course.

Pukki gets injured, out for a minimum of 6 weeks. Who’s playing?

Now tell me it’s wrong for being a bit concerned.

Don’t feel like you’re not allowed to be worried! #NCFC

Norwich City, the only club who can kill any hope of survival after winning the league convincingly, before the season has started. #ncfc

I love sending the #NCFC hashtag and twitter community into a stress field. Just gotta have a laugh and live a little, we’re looking at a potentially shit window. Just lighten up, have a laugh and support the team, if you don’t laugh about it you’ll cry!! 🤣

Time to start seeing more from Rashica. Been very low key from him so far. #ncfc