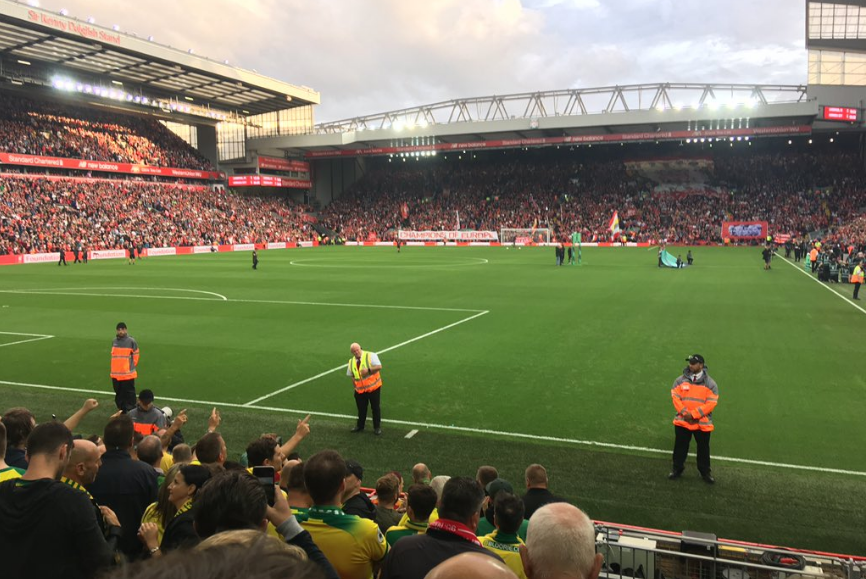 If anybody needed an immediate verdict on how City fans felt towards Friday’s performance at Anfield, then watching the reaction of those who made the journey up to the North West painted a picture more meaningful than any words spoken by former players or written in columns.

Compared to the rapturous applause and vivid colour displayed in that act of celebration of the Canaries performance at Anfield, the rest is merely meaningless noise.

The columns and punditry that followed were predictable.

Given the global exposure Norwich are subject to, the volume and variety of opinions were always going to increase; the noise that Stuart Webber rejects was about to increase to almost unbearable levels.

Buzzwords like ‘naïve’, ‘careless’ and ‘moronic’ have been uttered in the wake of the Canaries’ defeat, even some resorting to declaring relegation was nothing more than a formality given the way Daniel Farke’s men went about the game on Friday evening.

Those who have followed City since the beginning of the Webber and Farke revolution will know every brick has been placed with purpose, research and precision. To quote Frank Sinatra, they did it their way and one that will be visible across their performances this season.

And context is everything.

Writing columns and bemoaning tactical approaches is simple without having consumed much of the Canaries’ rebuild over the last two seasons; every pass has been rehearsed, every passage of play devised from scratch.

Once again, all that is being applied to their opening fixture is conventions.

There’s a romanticism around defending and the need to be resilient to compete. Noise. You need to spend money to ensure you don’t get relegated. Noise. You can’t play expansive football against Europe’s elite and expect to succeed. It’s all noise.

The quantity may have upped, but City have overcome the same criticisms before. Critics will always impose themselves onto what they don’t contextualise, and the real achievement for Norwich is that they have a team that is lining up in the Premier League at all.

Anyone who witnessed the way Villa approached playing Tottenham or the way West Ham tackled Manchester City would have been more impressed by a City side who were more courageous, with a genuine belief in their philosophy. Teams can lose their identity by conforming to that ideology of not getting beat.

Norwich supporters will recall the Chris Hughton era, where consolidation and defending were the sole objectives. Defeatism is accepting your place; Norwich, as Daniel Farke often comments, aspire to be more rebellious.

Yet, because of their perceived lack of ambition in the transfer market or self-belief in their principles, criticism lands at their doorstep. The facts don’t lie, City prevented a Liverpool side from completing 500 passes at Anfield and they broke through the defensive lines with purpose and confidence.

That’s why the scenes at the end were positive.

Simply put, Farke could have placed eleven men behind the ball, deployed a low block and allowed Liverpool the possession to control proceedings. But he didn’t, despite describing them as the best team currently operating in world football.

Naturally, there’s frustration about the manner of some of the goals conceded, but the overriding emotion as supporters departed the away terrace was one of pride and optimism.

Had Norwich have shown more composure in front of goal prior to the carnage unfolding, then this game could have panned out differently. Had ricochets not of fell to Mo Salah or had Grant Hanley had not sliced it beyond Tim Krul, then who knows how the game would have unfolded.

But dropping tools and merely making up the numbers isn’t Norwich’s way.

There will be no sleepwalking their way to the drop. It’ll be attacking, implementing a philosophy and young players experiencing a steep learning curve, everything that should be championed by clubs across the country. The romanticism of deep defending and direct football as the only way of overcoming elite teams is out-dated.

Optimism and positivity stem for that second half offering.

Admittedly, Liverpool’s intensity may have decreased, but City played their way back into proceedings. It wasn’t just them absorbing pressure but implementing a style of play that , beyond Manchester City, you wonder whether anyone else will replicate at Anfield during this campaign.

Other teams will undoubtedly park the bus and replicate the scoreline, if not concede more.

City’s critics need to get used to the fact those from Norfolk have accepted losing games, they’ve accepted getting the odd battering but still believe in the approach Norwich are deploying.

That we now have a voice in a Premier League is an annoyance to many, as will watching Norwich will play their way to safety not looking back but opting to play forwards with exciting, engaging football that scores goals.

Respect doesn’t win points, but Norwich’s stylistic approach will allow them to compete more than those who have an emphasis on defence. Not because attacking football is the best way but because it’s their way, and no matter who criticises it or sneers at it is ignoring the context of which they got here in the first place. That won’t alter.

And given the away contingent’s response to the Anfield performance, nor do they want it too.

City have their limitations, as does every side, yet, instead of attempting to nullify opponents or travel down the easy route to survival – which doesn’t provide that safety blanket than many discuss – they opt for bravery and retention of the football.

Conforming to rules isn’t Norwich City. Neither is it Daniel Farke.

They won’t accept their position in the league or respect anyone else’s. For them, this is about education and courage. Iimproving defensively will be a topic on the agenda of Farke and Webber, but so it is for every team.

The actual test is how City balance that risk and reward – after all, they won’t be facing a team assembled for £1 billion or meet the offensive talent they did on Friday evening.