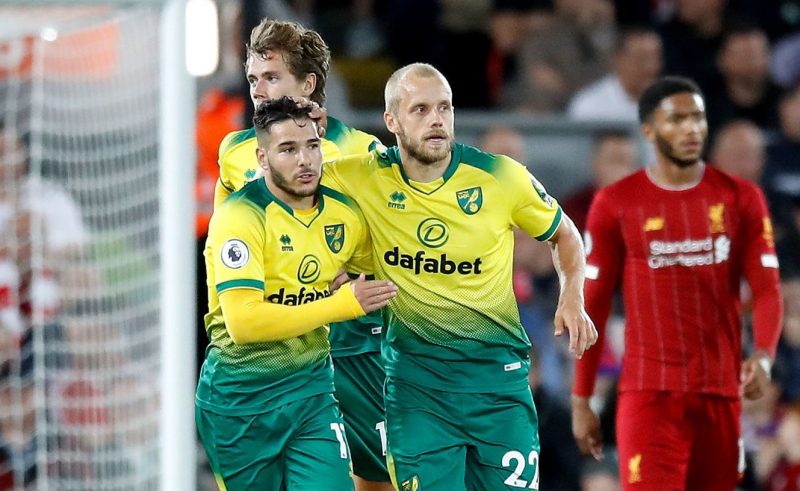 In his first of what will be a regular feature on MFW this season, Joe Hinchcliffe has one final look back at City’s last outing – Liverpool in this case – before all eyes turn to the Canaries’ next game.

Much has been said and written in the wake of City’s 4-1 loss at Anfield on Friday night, but one word keeps making an appearance – naïve.

Daniel Farke said it himself, ‘we’re not naïve, we know that in each and every game in this league, we are the underdog.’ But that hasn’t stopped every pundit up and down the country using the word with different connotations.

Much of the debate, mainly outside of the Norwich fan base it must be said, has been focused on a need for City to be more pragmatic. Souness, Neville, Carragher, Shearer and others have all had their say and, in fairness, all approved of the Canaries playing style, but nonetheless suggested a need for greater pragmatism, whether it be during defensive transitions, while playing out from the back, or just fielding a more experienced team.

But is it naivety? Or is the bravery and youthfulness of Norwich’s style and philosophy being mistaken for naivety just because it goes against the grain?

City named the youngest matchday squad the Premier League has witnessed in 24 years, a starting eleven that included four academy graduates – Messrs Aarons, Lewis, Godfrey and Cantwell. Yet, still they managed to create the most chances of any opposition team at Anfield for two years.

In addition, Norwich were only the fourth team to restrict Liverpool to less than 500 passes at Anfield, since the start of the 2017/18 season.

Let’s not forget, this is a Liverpool team that has not lost at Anfield since May 2017. City approached an away game with the European champions looking to implement their own style and take the game to Liverpool.

I’d say that’s incredibly bold and brave and certainly not naïve. Changing to an unfamiliar game plan for the occasional trip to Anfield and the Etihad would likely end in defeat anyway.

Post-match, Farke was quick to praise his players for their willingness to remain principled despite the scoreline. Jurgen Klopp similarly commenting that Norwich ‘stayed cheeky, they stayed lively, they changed their plans offensively’ before commenting that he had the biggest respect for what Daniel Farke is doing at Norwich.

I raise this point because over the course of this season many teams visiting Anfield will find themselves facing a precarious scoreline at half time, and many of those teams will choose to opt for damage limitation tactics and retreat into a low block on the edge of their own area.

In Saturday’s late game, Aston Villa caused Tottenham a whole host of problems on the counter, with McGinn, Wesley and Trezeguet doing most of the damage during the first half, and they deservedly lead 1-0 at half time. However, for much of the second half Villa retreated deep into their own half and eventually succumbed to three Tottenham goals.

Which begs the question, is it not naïve to change a game plan which is working so well? Had Villa stuck to the game plan that served them so well in the first half as opposed to taking a more pragmatic approach, they might have even won the game.

With one of the undoubtedly tougher fixtures out of the way, City can now look forward to a more favourable home tie with Newcastle United, a chance to further ingrain the club’s style of play and philosophy onto the Premier League.

Regardless of what happens on Saturday, I’m sure Norwich City will still be synonymous with talk of impending relegation for pundits and national journalists. I’m starting to understand why Stuart Webber has those words printed on the wall of his office – ‘Ignore the noise.’