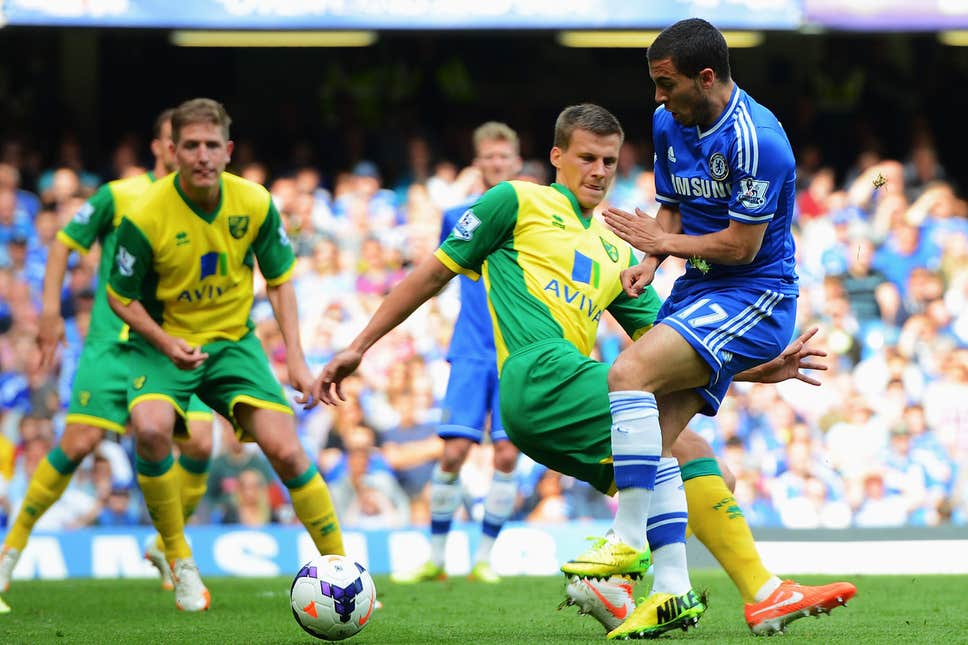 As part of MyFootballWriters’ pre-match preview, I look back at previous clashes between Norwich City and our upcoming Premier League opponents.

City’s tough start to the season continues with a glamorous Saturday lunchtime date, as we welcome Frank Lampard’s Chelsea to Carrow Road. It is another fixture that Norwich will begin as unfancied underdogs, but as we shall see, when it comes to City v Chelsea games, this hasn’t always been the case…

To our younger readers, in particular, it may come as a surprise to learn, that in the pre, cash-rich Abramovich days, Chelsea and Norwich were clubs of a similar size, stature and trophy count.

In the 24 league meetings before the launch of the Premier League, City led the head-to-head record with nine wins to Chelsea’s eight. It took the fashionable Londoners eleven attempts before they finally left Carrow Road with three points in the bag.

A pub team formed two years after the Canaries, Chelsea managed to avoid the Southern League (unlike most of their London rivals). Already the ‘big club’ bias kicking in as Chelsea were elevated straight into the professional set up, within the English 2nd Division.

The first match between the clubs would, therefore, come later, in the FA Cup. On the 11th January 1936, the two met in the 3rd round, a 1-1 draw at Carrow Road. This was followed, four days later, by a 3-1 defeat at Stamford Bridge, in the replay. A sequence that Norwich would become familiar with having lost 3rd round replays, at Chelsea, on two further occasions (2002 and 2018).

2018 was the last time the two were paired together, with City claiming a famous away draw courtesy of a rare Jamel Lewis goal and all in front of the BBC cameras. Norwich’s resistance, that evening, was finally ended on penalties, but they had shown a watching nation that they could compete at that level and what may be possible playing ‘Farkeball’.

The most famous FA Cup meeting between the two was in the 2002 competition.

A 4-0 Chelsea win was fairly routine, but it would be a game remembered in history, thanks to a moment of genius from the Blues play-maker Gianfranco Zola. In the 63rd minute, Zola improvised to score from a corner with a back-flicked volley. Captured on camera it was one of the finest goals ever conceded by City, or by any team for that matter.

The FA Cup may have brought joy for Chelsea but in the League Cup, it has been a different story.

The League Cup semi-final in 1972/73 was one of the biggest games to-date in Norwich’s history. Carrow Road was packed to the rafters on the 20th December 1972, anticipating a first trip to Wembley, after Norwich had won the first leg at Stamford Bridge, convincingly, 0-2.

Deep into the second half, it was almost job done, with the Canaries leading 3-2 (and 5-2 on aggregate), however, the weather had other ideas. There had been a heavy fog hanging in the air throughout the game, in the 85th minute it decided to make its presence felt swirling in from the River End leaving players, the ball and the pitch all but invisible. The ref had no choice but to abandon and replay the game – Chelsea had a reprieve.

A fortnight later, justice was done in-front of just under 35,000. A 1-0 Norwich win was meet with jubilation and relief. That first Wembley final confirmed and much-fancied Chelsea with Peter Osgood and co sent packing.

(Footnote: the Chelsea side that lost at Carrow Road contained ten Englishmen in the starting eleven – how times have changed).

Honours were even in the league throughout the 1970s. In general, during that era, City had developed a reputation as draw specialists. They took that to the extreme versus Chelsea, drawing seven consecutive games between 1974 and 1978. A run finally ended on 10th March 1979 and a 2-0 Norwich home win.

There was a famous win in West London at the end of the 1984/85 season. The 14th May was City’s final game of the season and a 1-2 win, in the rain, seemed certain to guarantee another season of top-flight football. Eight points clear of Coventry who occupied the final place in the drop zone, the Sky Blues still had three games to play and subsequently went on to win all three, leapfrogging Norwich to safety.

Never again would clubs finish their season on different days.

That memorable first season, it was Norwich, not Chelsea challenging for the title. In a quirk of the fixture list the two meet twice within a month – Norwich winning both. The victory at Stamford Bridge was particularly pleasurable, as City came back from 0-2 down, thanks largely to a couple of Dave Beasant goalkeeping howlers, to win 3-2.

The victory was especially sweet, as the Chelsea side included ex-Norwich heroes, and Hall of Famers, Andy Townsend and Robert Fleck. Fleck was the most recent big-money departure having become Chelsea’s record signing (£2.1m) in the summer of 1992.

During those early Premier League days, City lost just once in their first six Premier League fixtures against Chelsea. There was even a rare win in the relegation season of 1994/95, when two goals from new signing Ashley Ward, and a young debutant, Jamie Cureton game City a comfortable 3-0 home win.

It would be the last time Norwich beat Chelsea…..

It was a decade later before the two would resume battle and a lot had changed in those ten years. Now at opposite ends of the footballing spectrum, cash-rich Chelsea were establishing themselves among Europe’s elite, Norwich just happy to be back on the Premier League.

The games – City losing 3-1 and 4.0 – reflected the gap between the two. Chelsea ended that season Champions. Norwich ended it with relegation.

The Norwich goal in the 3-1 defeat was scored by Leon McKenzie and was significant in that it was the first goal conceded by Petr Cech in 1,025 minutes, a Premier League record.

Another player, who played in both of those games, (and scored in the 4-0) was Frank Lampard. ‘Super Frank’, of course, is now back at Chelsea in the managerial hot-seat.

The midday Carrow Road kick off will only be Lampard’s third game as a Premier League manager. It could be a good opportunity for City to strike as he finds his feet, although saying that, Lampard was one of only two managers last season that took four points of Daniels Farkes’ champions…

While you’re here… in order to hopefully guarantee the survival of MyFootballWriter.com for the foreseeable future, we’re in the midst of a crowdfunding drive. The plan is that MFW not only survives but thrives with your support and commitment. With the guaranteed revenue this monthly membership model will bring, we can introduce new formats, expand our video offering after the success of our Stuart Webber interview, whilst all the time encouraging the next generation of Canary football writers to spread their wings across our site in front of our local audience now up to 12,000-strong.

Please have a look at our Patreon page and, if you could help, we’d be ever so grateful. But, most importantly, thanks for reading.