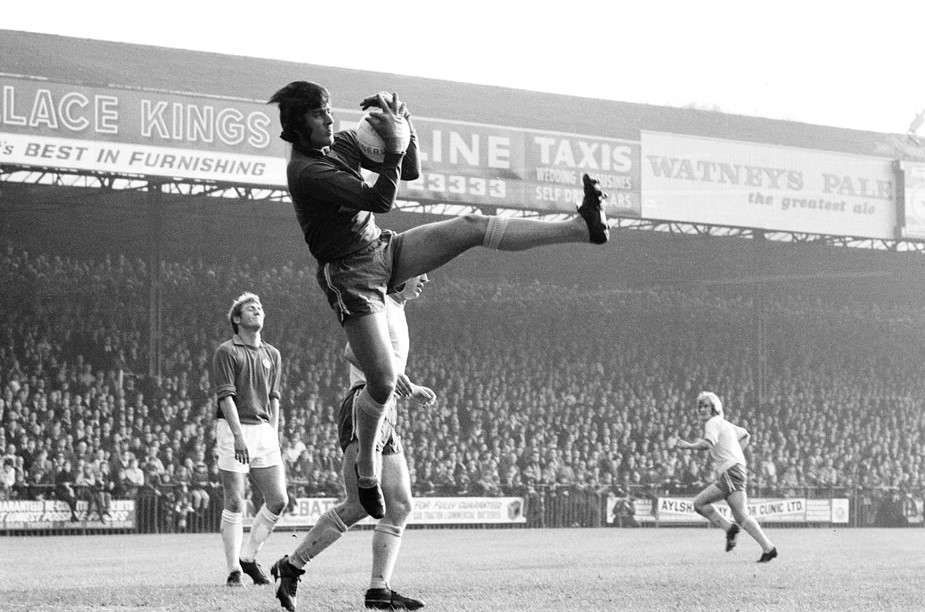 Here’s a question for you. Answer in your own time.

Name a Norwich City goalkeeper. Preferably your favourite one. Ever.

The names roll off the tongue like freshly laid summer turf, don’t they? The great and the good, as well as the very good. A yellow and green roll call of goalkeeping excellence.

Kevin Keelan. Chris Woods. Robert Green. Bryan Gunn. Not forgetting Angus, of course. Plus, of course, the current man in the number one shirt, Tim Krul, the first-ever goalkeeper to be used in a match solely for the purposes of a penalty shoot-out.

For many people, myself included, Keelan, is one of their earliest and most vivid Canary memories. Sadly, for me, I never got to see him play in ‘real-life’ – my memories of the man were exclusively furnished by television, Anglia TV’s groundbreaking Match of the Week programme the prime source.

Whenever Norwich appeared on the show, Keelan would, invariably, do something that would cause the crowd to gasp and for Gerry Harrison, marooned in the commentary box to contain his excitement at the scale of Cat’s latest impossible act.

Truly, the man could have been a gymnast, a trapeze artist, a free-fall parachutist. For Keelan, mid-air was somewhere he was as familiar with as you or I are with our living rooms. The shapes he took on, the forms, the near ability to fly. He was a living sculpture. Watching him on the small screen was always a treat. Seeing him for real must have been something else. I do envy those of you who saw him at his best.

My fellow MyFootballWriter scribe Mick Dennis was certainly familiar with Kevin – man and majestic sportsman. I’m sure he won’t mind me repeating the essence of what he told me about Kevin when I asked him for some thoughts and memories of him a short while ago.

This little tale centres on Norwich having just appointed Bournemouth’s John Bond as manager in December 1973. By then Kevin was Norwich’s best known and, in all likelihood, their best-paid player. And, even if he was then 32, he would still have had a substantial sell-on value should Bond have chosen to cash in on him for team-building purposes, especially with ex-Cherries keeper Fred Davies set to follow his old boss to Norwich.

Keelan had just endured a tough first season with the club in Division One in the 1972/73 season, the bruised and somewhat battered Canaries ending it by avoiding an immediate return to Division Two by just two points. Yet things weren’t to immediately improve the following campaign.

When Bond arrived, City were bottom of the league, having won just two of their opening seventeen fixtures. If truth be told, the Canaries were in freefall, with many of the players who had contributed to their rise and rise to the upper echelons having been ‘found out’ by better and more wily teams and opponents.

Bond, a renowned buyer and seller of players, knew his new team needed immediate and radical surgery if it was to have any chance of surviving, introducing a host of new players into the Canary ranks in the months that followed his appointment.

Given that he was rather fond of bringing in players from former club Bournemouth, there were those who suspected that Davies would provide immediate competition for Keelan, but this never materialised, although he did eventually end up at Carrow Road as a coach. But no. Keelan was the established goalkeeper at Norwich and Bond was very aware of that fact.

Kevin was the established goalkeeper when Bondy arrived and, despite his Redknapp’esque approach to buying and selling, Bond never sought a replacement nor questioned Kevin’s right to the number one shirt. That was its own testament to him because Bond was always looking to improve his team and squad.

Roger Hansbury, who was his long-term understudy, wasn’t a bad keeper, but Kevin was definitely number one. But the rest of the team certainly changed under Bond. Colin Sullivan was brought in at left-back whilst Forbes and Stringer eventually gave way to Jones and Powell.

But through all of those and the other changes, Keelan remained a consistent presence behind the defence, capable of great athleticism yet a master of the goalkeeping basics. The ‘big players’ at the club – Duncan Forbes, Martin Peters, Ted MacDougall and their ilk – all treated Kevin with the respect that is obvious between the top players; recognising someone who could do the job. 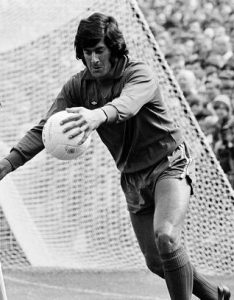 The ultimate respect that one professional offers another is often as simple as that: acknowledging that they can do the job needed. For Keelan, to have it from someone as well versed and respected in the game as Bond was one thing, but for him to also have it from strong characters like Peters and MacDougall was something else, something special. And, like any true professional, Keelan hated to lose.

Mick was a regular on the coach to and from games at the time and recalls that, on the way home after defeats, Keelan was very quiet: no ranting or moaning, just an unhappy professional processing his personal disappointment. But after a win or a decent draw, he was a ‘noisy sod’.

He wasn’t one of the card players, and there were no personal TVs or anything, so he would end up wandering up and down the coach and engaging in banter. He was good company, accepting the young reporter on the coach as just another one of the lads. There were no noticeable cliques, although some players were better friends with each other than with the rest.

But Kevin was clearly well-liked by everyone. He often frequented a late-night club/bar called El Piano. He also did the seventies ‘thing’ of opening a boutique, which was in Anglia Square.

Far from wanting Keelan out, Bond doted on his ‘new’ keeper, immediately identifying him as one of the key members of his squad. He was so keen to retain his services, no matter what, that he even engaged in a bit of footballing skulduggery to ensure that Keelan’s services were retained where they were, had been, and would continue to be so highly valued.

The club that showed more than a passing interest in Keelan was Manchester United, then managed by Tommy Docherty. It would have been in around 1975 when the approach came.

Both Norwich and the Red Devils had been promoted back to the First Division after a season away, Docherty spending that time fashioning an exquisitely youthful and talented team at Old Trafford that included young tyros like Jimmy Nicholl (19); Gordon Hill (21); Steve Coppell (20) and Sammy McIlroy (21).

However, Docherty still had doubts about his goalkeeper. Alex Stepney was nearing his mid-30s and had been at the club since 1966 and was, in essence, part of the ‘old guard’ who the Doc was looking to ship out. Stepney’s number two, Paddy Roche, had joined the club from Shelbourne two years previously but had never really convinced – indeed, in his near-decade of service at Old Trafford, Roche only played 46 league games.

He was decent. But a number two goalkeeper at best, especially at a club as big as Manchester United. Docherty knew he needed a big man, a character, a personality in his number one shirt, someone who would come in and thrive on the expectancy of playing for a club who, after all, had been European Champions only six years previously. That and the prospect of appearing in front of 50,000 plus fans every other week.

The answer to his problems seemed clear cut and obvious. That man would be Kevin Keelan.

Thus, more in expectation than hope, Docherty put in a call to Carrow Road and asked to speak to Bond. And, after exchanging pleasantries, Docherty delivered the reason for his call.

“The boy Keelan, John. I’m thinking he’d love it here. New challenge and opportunity, playing for one of the biggest clubs in the world. I know he wouldn’t come that cheap – but it would give you some funds to get your own keeper in – he is a Saunders man, after all. What might you be looking for – I’m sure he’d be interested”.

If Bond was shocked at the question, then he hid it well. And he gave his opposite number an honest reply.

“No problem Tom, I’ll have a word with the lad and get back to you”.

A few days passed, then a week. Eventually, Docherty was on the phone again. Had Bond mentioned their interest to Keelan and what had been the response?

“Sorry Tom,” said Bond, “I had a word with Kevin, told him about your offer. He’s had a think about it, but I’ll be straight with you, he says he’s not interested, he’s settled here and wants to see out his career with us”.

Non-plussed but accepting, Docherty hung up and went about his business. Bond, meanwhile, afforded himself one of his trademark smiles. He had no intention of selling Keelan and had not even mentioned Docherty’s call or Manchester United’s interest in his player.

Players came and went with Bond who usually, perhaps one costly exception, got it right when he spent the Canaries’ hard earnt money. But Keelan stayed put, a rock, virtually immovable.

Even when, at 37, Keelan seemed set to finally call it a day in the English game by joining NASL side, New England Tea Men, on loan, he still came back for a farewell tour of English football, playing in 26 consecutive matches for Norwich at the start of the 1979/80 season, seven of which were clean sheets.

He played his last Norwich game, at the age of 39, against Liverpool at Carrow Road on February 9th 1980 – the 673rd of his Norwich career, and seventeen years after the first, a 3-1 defeat to Cardiff City at Ninian Park on August 24th 1963.

His latter-day City teammate, Justin Fashanu, the man who seized the day during Keelan’s final game with that remarkable volleyed goal, was just two years old on that day, yet here they were now, brothers in Canary arms.

Longevity that will almost certainly never be matched, at Norwich City or any other English club. Or, put another way, for him to equal that length of Canary service and excellence, a keeper making his debut for City this weekend would need to retain his position as our number one until 2036.

That puts Keelan’s endurance as a Norwich City player into perspective if anything does. 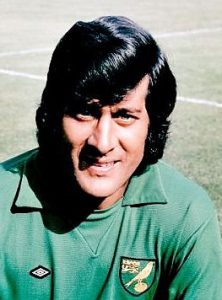 The Cat returned to the US where he played a further 29 games for the Tea Men before finally calling a halt to his senior career at the Tampa Bay Rowdies, where he also had a spell in charge of as assistant coach from 1982/83 as well as, over a decade later, taking on a similar role as the goalkeeping coach of the Tampa Bay Mutiny and as assistant coach at the University of Tampa.

Resident to this day in Tampa, he still finds time to day to coach young goalkeepers, ever busy, ever in demand, and as popular as he ever was.

It was his first-ever manager (of just four in 17 years – managerial ‘hot seats’ seemed a lot less, well, hot back then) at Carrow Road, Ron Ashman who later went onto call Keelan the “bargain of the century” at just £6,500 from Wrexham.

And, despite the fact he has strong competition for that tribute from fellow Canary transfer ‘steals’ like Martin Peters (£50,000), Kevin Reeves (£50,000)  Duncan Forbes (£10,000) and Teemu Pukki (free), it’s as hard to argue against Ashman’s claim now as it was when he first declared it.

Kevin Keelan. Legend. And one thoroughly deserving of the title.