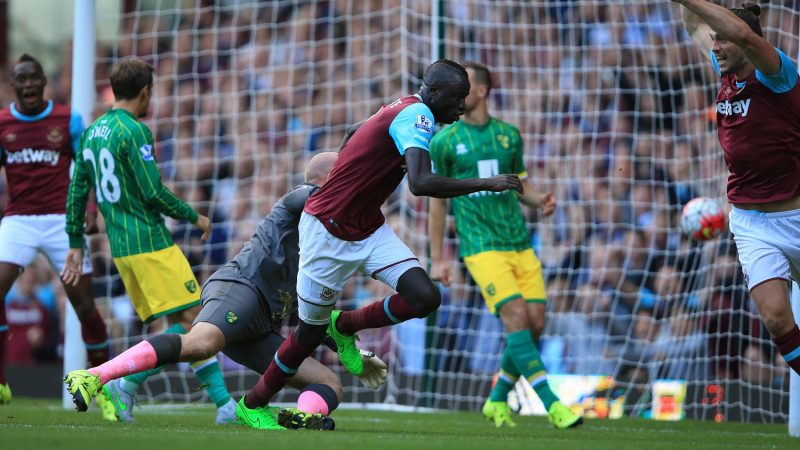 As part of My FootballWriters’ pre-match preview, I look back at previous clashes between Norwich City and our upcoming Premier League opponents.

Next up for City, a local derby, so to speak. The combination of a relatively easy journey together, with the opportunity to visit West Ham’s impressive new home (The Olympic Stadium), makes this one a ‘not to miss’, in the diaries of Canary fans everywhere.

2019, and the Olympic stadium may represent a new and modern era, but the history between West Ham United and Norwich City stretches back a century and beyond.

The 7th October 1905 to be precise. The first competitive meeting between two sides, both in their infancy. Norwich, the youngest, at three years, West Ham slightly older, at five years, having emerged from the old Thames Ironworks.

It was Norwich’s debut season in the Southern League, West Ham’s fifth. And it was us, the new boys that won the first fixture 1-0, although the Hammers would gain revenge with a 6-1 reverse in the corresponding game later that season. Norwich though had the final laugh finishing a respectable seventh to West Ham’s eleventh.

The two would meet each other regularly over the following years, 20 times to be exact. A sequence only broken by the outbreak of the First World War and West Ham’s elevation to the newly formed Division 2 in 1919/20.

The first league meeting took place on the 6th October 1934, City’s debut season in the second tier having stormed to the Division Three South title the year before; West Ham winning that first league encounter 1-2 at The Nest.

The corresponding home game, the following season (1935/36), was one of huge significance within our history. The 31st August 1935 was a momentous day for Norwich, the club, the fans and the city. It was the first-ever game at our beloved home – Carrow Road.

Built in a single summer, West Ham were honoured to be the first visitors to the brand-new stadium. The game itself was worthy of such an occasion – a thrilling 4-3 win for the home side. The crowd, just under 30,000.

Wind forward 68 years and, by a quirk of the fixture list, West Ham were again guests on an important day in Carrow Road’s development. It may not have been a new ground this time, but it was still a special day for the home support, as the new, modern, South Stand was unveiled, replacing the last of the originally stands, and with it, completing the transition of our home into an impressive footballing arena.

This time City was held to a 1-1 draw (mirroring the result earlier in the season at Upton Park, when a certain national cult-hero, Peter Crouch was the Norwich scorer). The crowd this time was just under 24,000.

Sticking on the theme of grounds, when City make their bow at the London (Olympic) Stadium on Saturday it will be the fifth ground that has hosted Norwich v West Ham league games, the other venues being Newmarket Road, The Nest, Carrow Road and Upton Park.

The guest of honour for the South Stand re-opening was Ken Brown, an EastEnder idolised in equal measure in London and Norfolk. A proper West Ham stalwart, Brown is tenth on their all-time appearance listing and winner of the club’s lifetime achievement award.

At Norwich, he was one of our most successful and admired managers. He matched Farke’s Championship title (Division 2 in Ken’s day) and then raised him a League Cup and a fifth-place finish in the top-flight.

There are many similarities between the Brown and Farke tenures in the Carrow Road dugout. Firstly a tangible feeling of a connection between the two clubs. This was largely fostered by Brown himself, but it was also based on a common philosophy of footballing style (playing the ‘right’ way) and a vibrant and successful academy.

Another famous face linking both clubs is World Cup winner, Martin Peters. Another EastEnder, by birth, who became an honorary Norfolk man after a hugely successful spell at Carrow Road throughout the mid/late 1970s.  It was a period when City finally established themselves in the top-flight thanks to Peters goals’, experience and leadership.

Peters faced his old club twice as Norwich doubled West Ham winning both games in the 1975/76 season 1.0 to finish, a then, record 10th place in Division 1. The following season he scored the winner as Norwich again beat the Hammers by a single goal.

League success over West Ham continued into the 1980s with Norwich winning 50 per cent of the games between the two. However, the Canaries’ most cherished win during that time came in the FA Cup.

The 1988/89 season was shaping up to be a special one with City going strong in the league and enjoying the type of cup run that we could only dream of today. Port Vale, Sutton and Sheffield United had all been despatched leaving Norwich in the quarter-finals and a tough trip to Upton Park.

A 0-0 was followed by a thrilling 3-1 victory in the Carrow Road replay. A Malcolm Allen double and Dale Gordon’s second-half finish sent a packed Carrow Road, and an army of inflatable canaries, into euphoria.

With the heightened status of the FA Cup in those days, it was arguably City’s most important victory since their last, and at that time only other, semi-final back in 1959.

Saturday’s meeting will be the eleventh West Ham v Norwich Premier League fixture, six of which have concluded in draws, including City’s final visit to Upton Park and the home game later in the 2015/16 season. Both games Norwich led late and both times they allowed the Hammers back in, both ending 2-2. Fine margins as Norwich went down.

The 2-2 at Carrow Road did, however, preserve a fine home record versus West Ham. It meant that Norwich were now unbeaten at home in the last 17 league games; the Hammers last leaving the Fine City with 3 points way back on 10th February 1973 (or to be correct, two points for a win back then).

And so we move on to the next chapter on Saturday, 114 years after their first meeting but City’s first visit to the London Stadium.

I was fortunate to be present in the stadium to witness those three British golds at the 2012 London Olympics. That day in sporting history is now known as ‘Super Saturday’ and here’s hoping for another August Super Saturday this coming weekend.