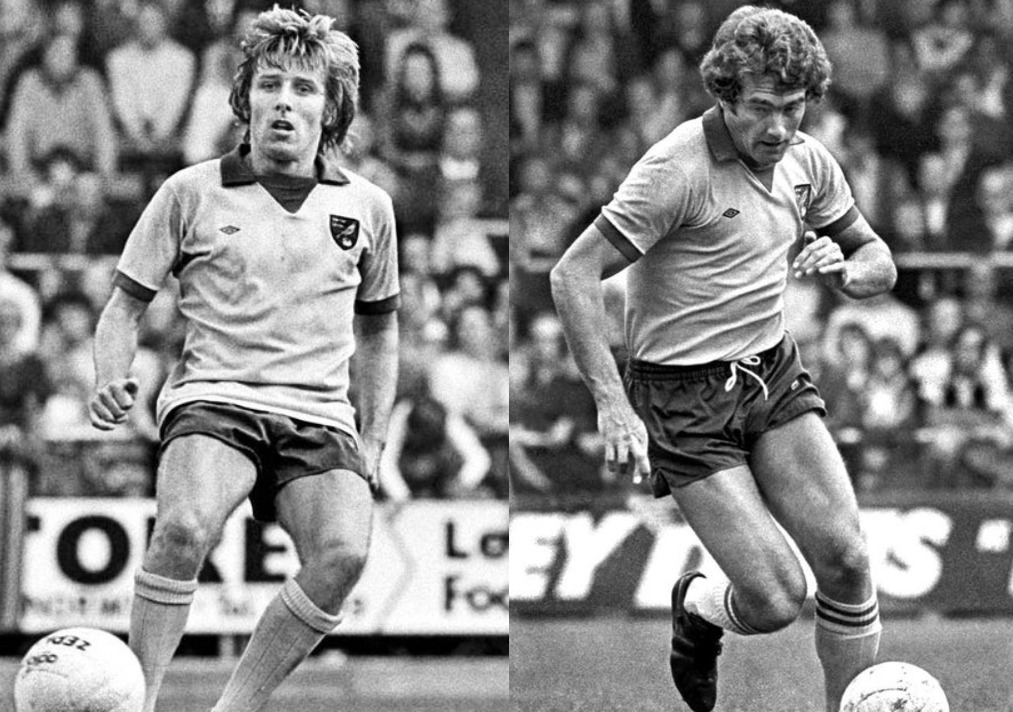 Charlie George. The sort of man who wound your dad up. Always a plus in my book.

“Why doesn’t he get a bloody haircut? The yobbo”.

Great player though. Extroverted and as liable to fall into a bottomless onfield sulk as he was to turn on a piece of magic that would leave your jaw on the floor and rolling down the terrace steps of the old River End.

I bet John Bond tried to sign him for Norwich.

Then there was Charlie Cooke. Fleet of foot and capable of leaving the very best of defenders with a grass burn or two as he left them in his fiery wake.

If, like me, you were as Roy of the Rovers fan, then you’ll remember Charlie Carter, the blond-haired goalkeeper with a penchant for rock music and hard living. He committed the cardinal sin of replacing Tubby Morton in the Melchester Rovers’ goal, reliability and common sense usurped by flamboyant clothing and a sports car.

Today’s Charlies aren’t the same. Charlie Adam anyone?  How about Charlie Austin then?

Nothing to see here.

In my early Canary supporting days I’d often share the car we all packed into from Brancaster (a white Austin I believe, but it wasn’t called Charlie to the best of my knowledge) with another Charlie. This was Charlie from Titchwell and he was a real character who’d only ever talk about himself in the first person.

Good times with some magical Charlies.

We had a rather special Charlie at Carrow Road for a while. Except, of course, in true Norfolk tradition, he was only called ‘Charlie’ because that wasn’t his real name. But what a player he was, one who deserves to be up there in the Charlie Hall of Fame.

I am referring to, of course, Phil Boyer.

Or Charlie Boyer, as he was known to fans, fellow players and management alike.

If someone was to ask me the type of player he was, I guess the closest comparison I could come up with would be Teddy Sheringham or Peter Beardsley.

Not an ‘out and out’ striker as such then, but more someone who operated at the sharp end of the formation using his guile, pace and exceptional reading of the game to create chances in abundance for a more orthodox striker.

A player of that nature will always find plenty of time and space for others in the course of a game which means, more often than not, he’ll also score a lot of goals himself.

A prolific maker and a taker of chances then. And they don’t come around very often. An early false number 9 maybe?

Phil began his career with Derby County in 1965 but, after three years and no appearances for the Rams, was released by the club when he was just nineteen.

Derby’s 1967/68 season hadn’t exactly been a good one. It had seen them finish in 18th place in the old Division Two (now the Championship) and just 5 points clear of the relegation places. They had, however, managed to entertain their fans in the process, scoring 71 goals in the process, a total that was only bettered by Birmingham City (81) and eventual Champions Ipswich Town (79).

Derby’s problems lay in their defence which conceded a total of 78 goals that season, the highest in the league.

The young Brian Clough didn’t need to look very far, therefore, to see where his side’s problems laid and where any money they might have for team strengthening might have to be focused. Which meant inexperienced teenage strikers were likely to be first out of the door that summer.

Which is exactly what happened with Phil.

He signed for York City whose predicament at the end of the previous season had made Derby’s seem almost palatial in comparison. They’d ended it needing to reapply for election at the foot of the old Division Four (League Two) and, having done that, were in urgent need of some new faces and the energy they’d bring to a club that had little more to look forward to than another season of turmoil at the very foot of the full time ranks.

He scored his first goal for York on August 31st, 1968 in a 2-1 win over Peterborough United, their first success of the season and, for another man, his last game for the club after 60 league appearances for them in two years.

The name of that 22-year-old goalkeeper? Mike Walker who would, of course, go onto no little managerial success with the yellow and green nearly a quarter of a century later.

Phil scored 34 goals in 125 appearances for York, striking up, in the process, a highly effective strike partnership with Ted MacDougall who later on described Phil as, “…a clever lad (who) began to do everything I didn’t like to do”, adding, “…he was always making himself available to receive the ball anywhere on the pitch and was able to link the play which I wasn’t good at”.

Typical honesty from Ted. But he must, at the same time, been eternally grateful to find someone so able and willing to do all the hard work on his behalf.

The two of them continued their flourishing partnership under John Bond who paid York City £20,000 for him in December 1970, not a bad return on someone who’d originally cost York just £3,000. Bournemouth were promoted at the end of the 1970/71 season into Division Three with Phil having contributed 11 goals whilst playing a substantial role in many of Ted’s season ending total of 42.

They went on to get 50 more the following season as Bournemouth finished in third place (just missing out on a second successive promotion) with Phil getting 15 and Ted 35.

A total of 77 goals in just two seasons meant Ted was hot property.  But he loved his life and work down on the south coast and continued to terrorise opposing defences until, in September 1972, the partnership was broken up when he signed for Manchester United.

Yet, by the time Phil also took his leave of Bournemouth to join Norwich (the £145,000 paid was a club record) in February 1974, Ted, having been bombed out of Manchester United and West Ham was already in-situ at Carrow Road.

John Bond had reunited the two of them in Norfolk and, having lit the yellow and green touch paper, proceeded to stand well back and wait for the fireworks that he knew would follow. But the results everyone was anticipating weren’t instant. Norwich were enduring a miserable 1973/74 season, one that would see them relegated from Division One with only 37 league goals scored.

But then Bond had brought them both in with a promotion campaign in mind. It was a case of brilliant forward planning and, in the season that followed, Norwich were promoted back to the top-flight with Ted ending that 1974/75 season with a total of 24 League and Cup goals whilst Phil contributed a further 21.

But then, just as has been said about Teemu Pukki this season, football critics were only too keen to point out that neither of them would survive at the highest level. MacDougall had, after all, been seen to fail at Manchester United and West Ham already.

The same fate would befall him and Phil in the 1975/76 season. Except it didn’t. Ted ended it with 28 goals whilst Phil got 11, including home and away strikes against Tottenham as well as goals against both Manchester clubs.

Thus whilst Ted seized all of the headlines, ‘Charlie’ Boyer did all the hard work. And how we appreciated and valued him for it.

As did England manager Don Revie who, in March 1976, made him the first Norwich player to win a full international cap for England when Phil played in the 2-1 win over Wales on March 24th 1976, a week after he’d scored his 100th league goal in football in our 1-1 draw against Manchester United at Carrow Road – one which, for a change, was made for him by MacDougall who, according to contemporary reports “chased a lost cause” (most unlike Ted) to chase down a loose ball and cross in order for Phil to score past Alex Stepney.

Phil’s strike partner for that England game was Mike Channon who was replaced at half time by Peter Taylor. One match does not, of course, illustrate as to whether or not a striker partnership is ever going to work or not, but it is interesting to note that England’s winning goal on the night was scored by Taylor with, you can be sure, a little bit of Phil Boyer involved in the build up.

Unfortunately for Norwich, the dawning of the 1976/77 season coincided with Ted pining for Hampshire. His business interests in the area meant that he was never going to want to remain at Norwich so, with some reluctance, Bond sanctioned his departure to Southampton for just £50,000, a ludicrously low price for a man who was still just 29 and had scored 62 goals in 134 appearances for Norwich.

His replacement was Viv Busby (my interview with him will be appearing on MFW very shortly) but, for Phil, Ted’s departure meant that he was unlikely to now hang around for too long himself and he joined Ted down at Southampton a year later having scored just 5 goals in his 21 league appearances for the Canaries in the 1976/77 season.

Boyer and MacDougall got 31 goals for Southampton between them in the 1977/78 season as the Saints ended it promoted to the First Divison.

Norwich’s leading goalscorer that campaign had been a defender turned attacking midfielder, John Ryan, who contributed a total of 15 league goals from 42 league games with another Bournemouth old boy, Kevin Reeves, just behind him with 12.

Much was expected of Reeves. He was, in many ways, a similar type of player to Boyer and one who followed in his Norwich footsteps by becoming the second Norwich player to win a full international cap for England.

Charlie Boyer ended up scoring a total of 49 league goals for Southampton before joining up with John Bond for the third time at Manchester City before playing in Hong Kong prior to ending his career with non-league Grantham Town.

He kept his footballing ‘eye in’ with a scouting roles at Northampton and Blackpool for a short while but now lives a quiet life that has had little to no involvement with football for a considerable time.

A man who was never, it seems, that keen to live in the footballing spotlight. Yet he shone as brightly as any Norwich player during the time he was at the club and deserves to be remembered as one of our best players and a definite candidate for any all-time Norwich City XI – providing, that is, your strike partnership was Charlie and Ted.