A couple of weeks ago one of our commenters, Cyprus Canary, suggested that Martin Peters was arguably the greatest player he had ever witnessed wearing yellow and green.

So, most appropriately as Man City are up next for us at the Carra, let’s follow up Cyprus’ comment in the spirit of the constantly arguing Gallagher brothers, Noel and Liam of Oasis fame.

To my mind Cyprus has a valid point, but I’ll argue with him to the extent that my favourite City player was Mark Bowen, who I also saw play in a Spurs shirt at White Hart Lane.

At the time he was a midfielder who rarely stood a chance of a first-team start as his direct rivals were Glenn Hoddle and Micky Hazard. So he came to us around the same time as Ian Crook and Ian Culverhouse. We will never make three better signings from the same club.

So why do I rate “Taff” Bowen so highly?

In my very amateur playing career I was a striker converted to a left-back, and to this very day it is the position I watch the most. Luckily, I’m fractionally to the left of the goal in the Upper Barclay and I’m in the ideal position in terms of observation.

I’ve seen the constant upgrades from Marc Tierney through Javier Garrido,then on to Martin Olsson and currently Jamal Lewis. Jamal is special to be sure.

But so was Taff.

He could play literally anywhere down the left. Full-back, midfield and even as a striker during an injury crisis, which he did several times. When Gunny snr was sent off against, I believe, Coventry, who went in goal? Yes, you’ve got it. Mark Bowen.

He performed well for a long time until he finally conceded late in that match. And he’s only my height, which is five feet nine.

Then there was the goal against Bayern Munich, as if readers need me to remind them of it.

It turned a little sour at the very end of his City career. This will have to remain an apocryphal tale but right at the end of Dave Stringer’s largely excellent managerial reign, rumour has it that Stringer stood outside the home dressing room while Taff undertook the team talk shop steward style inside.

Bowen was left marooned on 399 appearances for us and was left out of a few matches at the end of that season he could have been selected for, which kind of tells its own story.

Right that’s the end of my appraisal of Mark Bowen.

So what do MFW readers think?

Who is your favourite City player of all time? And just as importantly, why?

You can choose anybody from Percy Varco to Teemu Pukki, or even Adam Idah – but we’d love to know why you’ve made your choice.

My selection of Mark Bowen as my all-time great is purely subjective.

Just a bit of international break levity, but we’d genuinely love to know what you reckon, dear readers. 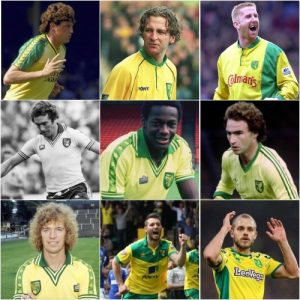 Brentford and Watford’s last 3 games are tough. Luckily we still have Bournemouth, Watford, Brentford and Reading all at home having played them away already. Yep I looked ahead at the remaining fixtures already 😅#ncfc

Anyone else have that horrible voice at the back of their head saying, "Norwich are going to fuck it up"? 😂 #ncfc

Didn't expect Robert Chase to turn up in #ItsASin #NCFC

And again, absolutely no thought for the travelling fan! Eh? Oh, yes...😉 #ncfc