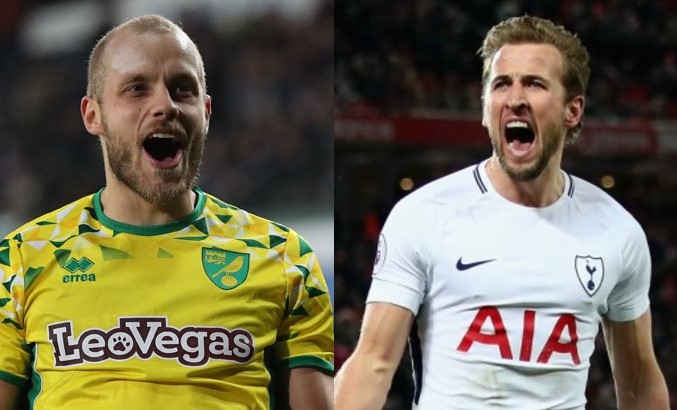 Here’s a question for you, especially pertinent given we had three of our own strutting their stuff for the England Under-21s last night.

Is watching England play, for you, as enjoyable as it used to be – if, indeed, it ever has been?

I’m forced to face up to the fact that it isn’t for me after another weekend of domestic football that has been, in the main, postponed because of the demands of European Championship qualifying.

The immediate consequence of that being, for me, not so much looking forward to watching England play their two qualifying matches, as feeling annoyed that it’s interrupted the domestic programme. This meant no Norwich game to look forward to, exchange views and hopes about, watch and, in its aftermath, analyse and further discuss in the days that follow.

It’s not like that for England games anymore.  Life carries on pretty much as normal in the days leading up to it, sofa time will be booked for the ninety minutes of action (and that alone, ITV’s pre-match and half time ‘analysis’ is reason enough to do something else) but, once the final whistle has gone, the game is forgotten and I just get on with whatever I might have been doing an hour and a half earlier.

Indeed, it’s probably got to the stage that I now watch England games purely out of habit. The same sort of habit that sees me endeavour to consume my regulation five healthy portions a day. Not, in other words, something I choose to do because I like what I’m eating or enjoy doing so – but because I’m told that, somewhere down the line that investment will pay off, that it’ll be “good for me” in the long term.

And so it is with the England national team. I sit, I watch, I hope. Hope that, someday and at some, as yet, unspecified time in the future, all of those frustrating, occasionally boring and, like a Chinese takeaway, almost always unfulfilling hours watching England play will come off and it too, like eating melon and kiwi fruit on a daily basis, will also be good for me.

It’s not as if it hasn’t happened before or that I’ve never got a buzz out of watching the national side. Euro 1996, a glorious early summer evening and England are dissecting Holland at Wembley. For each England goal both me and my wife dance, unfettered joy in our hearts, out of the house and into the garden, as does, it seems, everyone else in the road where we lived at the time.

Fast forward to Euro 2004 and Wayne Rooney, still only 18, scoring four goals in two games for England and my thinking, at the time that he looked as if he was going to be one of the greatest players ever to have worn an England shirt before injury ruled him out of the rest of the tournament.

And, of course, Russia 2018 almost brought us the trophy or at least the final, we have been craving since 1966.

There have been plenty of low lights too. None greater than when Ronald Koeman scored for Holland against England in a crucial (aren’t they all?) qualifying match for the 1994 World Cup. Koeman, lucky to be on the pitch at all after escaping a red card a few moments earlier scored, at the second attempt, from a free-kick, Brian Moore identifying what he was going to do long before the England defence had worked it out with his, “he’s going to flick one now, he’s going to flick one….” –and thus he did.

England were a goal down and, in rage and frustration, I stormed out of my house and stalked the streets of South London for a few hours, such was my anger and upset at not only the injustice of it all but the very real likelihood that England would not now qualify for the 1994 World Cup.

Ridiculous I know, but that’s how I was at the time and that’s how much I wanted England to win and do well.  Committed and unconditional. Full-on in fact. Three lions on my shirt.

And yet now? Well, the word ‘meh’ comes to mind. England play, I watch, they win, draw or lose. Life goes on. I don’t know when that all changed or why and yes, part of me does feel disloyal, unpatriotic even because of it.

Should I feel ashamed?

I don’t know – and, sadly, I don’t particularly care either. Does that make me unpatriotic? Probably not. But what it does make me is, without question, a club before country man and in every respect.

A question was once asked. What, given the choice, would you prefer? England to win the next World Cup or for Norwich to win the FA Cup next season? My answer, one that came out before I’d even had time to think about it was instant.

FA Cup? Well yes, of course. But, given the choice between three points for Norwich in their next league game or England winning tonight against Kosovo, give me the former every day of the week.

And, with a gigantic league game coming up against Man City this weekend, the same still applies – three points for Norwich or Harry Kane lifting the European Championship trophy above his head in Wembley next summer, I’ll take those three unlikely points at Carrow Road, please. Every time.

And, suddenly, with that self-revelation, I realise why it’s club before country for me now – and, more to the point, to such an extreme.

Being a Norwich fan. Think about it. We are, to paraphrase that old EastEnders cliché, ‘family’. We’re well and truly all in it together. There is a sense of belonging, of community, of shared delight and mutual despair; of new friends made, if only for ninety minutes – or even ninety seconds.

I remember one game against Reading in the Chris Hughton era, Elliott Bennett scored and danced in delight in front of we normally reserved folk in the River End – did I say reserved? For it was me that more or less stood on his seat, stretched out his arms and screamed, at the top of his voice, “Elliott Bennett, I bloody well love you”. And, at that moment, I did, I really did.

We’d gone into that game on the back of a poor run and the tension laid so thick in the air prior to kick-off that you could have used it as a tasty filling for one of the half time pies. Thus, when Benno scored, the explosion of relief that we all felt was cathartic, a release and realisation that our team, and I emphasise the use of the word ‘our’ there, our team still had in them the fight, conviction and faith to dig themselves out of the somewhat self-inflicted hole they had dug over the preceding six games. And they did.

There is little like that feeling when Norwich score. It’s raw, it’s tribal (yes, even in the River End) it’s us against them and ‘us’ prevailing, against all the odds as well as the critics, and, time and time again, having our say, making our mark.

It’s that sense of mutual belonging that I mentioned earlier and the fact that, for many of us, we are seen as much a part of the club, as supporters, as any of the players, management or boardroom members are. And it feels all the better because, as far as our support is concerned, we chose it, we made the conscious decision to be Norwich City fans.

Sometimes those men in the yellow and green are heroes, occasionally, like last season, they are gods. And yes, there have been times when they have been good for nothing, useless bloody bastards. But know this: even when they are that, they’re our good for nothing, useless bloody bastards – and woe betide anyone outside of the yellow and green family who besmirches their or our name, even then.

Do I, can I ever, have or display the same feelings, passions, emotions for England that I do for Norwich City?

Kane could score a hat-trick in the Euro 2020 Final next year as England send Germany packing in a 4-1 win that draws plaudits and adoration from around the footballing world. And that would be great. For him, his teammates, for all the fans there to watch it. And, as we would inevitably be told afterwards, for the greater good of the game as a whole in England itself – starting and finishing, I suspect, in the Premier League.

But there you go. I know that.

But I also know I wouldn’t be dancing around my living room, stood on the sofa, arms outstretched as I scream, at the top of my voice,  “Harry Kane, I bloody well love you”. Because whilst I’m English by default, I’m Norwich by conscious choice – and that’s why my loyalties lie, firmly and irrevocably, on the side of my team in the club versus country debate.

But if only it were that simple. Because, as I wrote earlier in this piece, I used to feel as passionate about England as I do about Norwich. Damn you Ronald Koeman and his revenge strike for that joyful 4-1 annihilation of the Dutch at Wembley in 1996 – I bloody loved Teddy Sheringham that night!

So what else has changed? Because I know I’m not the only one, that my stance, my view, my opinion is not alone and unique. Indeed, far from it – I’d go as far as to say I’m part of a very great number of people who now regard their support for their club side as, like me, superseding that of their national one.

Is it because we find it easier to identify with our club side? Do Norwich, as, I am sure most of the senior clubs in England do now, make greater and more concerted efforts to make their fans feel involved, to be part of things?

It’s easy, it’s accepted to drape yourself in the club colours and pledge your support. And, in contrast to that, and with the very concept of being English now one of great debate and argument, do we find ourselves feeling distant from whatever that is or means, and, in doing so, finding ourselves more drawn to the areas where we were born, where we live, where we feel most at home – ‘localism’ as it is now contemporarily known?

I think that may have a lot to do with it. I can certainly identify with those words of Lord Nelson, addressed to the admiring masses at Great Yarmouth as he stepped ashore there once, declaring: “I am a Norfolk man and Glory in being so.”

I know people will disagree. Indeed, I’ve said, time and time again, that disagreements in football are what makes it the joy that it is, those differing opinions and dissenting voices to your own – it’s intoxicating, and I wouldn’t want it any other way. None of us are right or wrong, but we all have opinions.

So what’s yours on this matter? Is it club first for you? Or country? And why?

I’m very much a club man. But you probably realise that by now!

Good luck to all of our associated clubs competing in the FA Cup this weekend.

👀 Emi Buendia WILL NOT be joining Arsenal this January

@mjtward19 Your Birthday Mike 🌟
Many HAPPY RETURNS to you Dear Canary🐤
Enjoy your special day ,hopefully not completely alone
🥳💐🍾 #ncfc