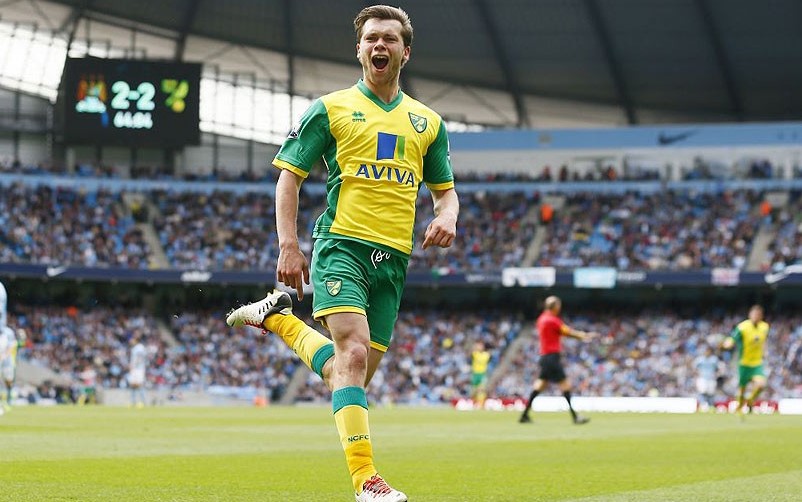 As part of MyFootball Writer’s pre-match preview, I look back at previous clashes between Norwich City and our upcoming Premier League opponents.

Norwich’s 2019/20 Premier League campaign, so far, has been a real baptism of fire. This Saturday it reaches its pinnacle when the best of the best arrive in town – Manchester City. In the last two seasons, they have amassed an incredible 198 points and bagged 201 goals. They won the domestic treble last season, have a star-studded squad, and for the first time, we welcome the world’s most famous manager, Pep Guardiola, to Carrow Road.

But they haven’t always been that good. For many decades, Manchester City were bang average at best. It seems hard to believe that only 17 years ago Norwich v Manchester City was a second tier (First Division) fixture. On that occasion, in the 2001/02 season, it was Kevin Keegan in the away dug-out as City opened their home campaign against the pre-season favourites.

It’s a game made famous for a remarkable debut goal from City’s new striker Marc Libbra (remember him). Replacing Iwan Roberts, Libbra’s first touch lifted the ball, Gascoigne style, over the on-rushing defender, the second touch drilling the ball into the net.

Time taken from substitution to goal was 11 seconds. Sadly, as we all know, it was a false dawn, Libbra would go on to score a disappointing seven goals in a yellow and green jersey and was gone by the start of the 2002/03 season – a transfer failure.

Keegan’s Manchester City were back at Carrow Road for another game that has gone down in Canary and Premier League folklore. Sky Sports Monday Night Football was shaping up to be a classic.

Norwich had roared into an early 2-0 lead only to be pegged back by half-time. As the crowd captured their breath, the real drama occurred as Delia, mic in hand, performed a passionate and rousing speech – ‘Let’s be having you’ was born and how the media lapped it up.

Sadly, back on the pitch, Robbie Fowler’s last-minute winner confined Norwich to a morale-sapping defeat; another nail in the City coffin; defeat followed defeat, and ultimately another Premier League relegation.

When it comes to Manchester City, it has always inevitably meant defeat. Even when they were nothing special, a shadow of their current selves, one thing could be guaranteed – they would always beat us.

For Norwich, they are the very epitome of a bogey team!

The first-ever meeting between the two set the scene. On 17th December 1938, Norwich left Maine Road with a 4-1 defeat. On the next trip to the blue half of Manchester, it was worse – 5-0. The 1964/65 – in Division 2 – provided some respite, Norwich managing to do the double with a 2-0 win at Maine Road, followed, just a week later, with a convincing 4-1 home win.

After that, it is a tale of sorrow.

That home win came on the 16th September 1964. It was followed by a run of nine draws and eight losses. This dismal record was ended with a 2-0 home win on 4th April 1980.

Sadly that win was a one-off, as the cities of Norwich and Manchester returned to type; eleven more games, with eight losses and three draws. Maine Road, in particular, became the away trip from hell, as Canary fans made the journey up the M6 on 18 consecutive occasions, without seeing an away win. On 13 of those trips, Norwich returned empty-handed.

So bad was this spell that during the 1975/76 season Norwich somehow managed to play Man City five times without a win. A draw and defeat in the league, then two draws in the League Cup before we were humiliated 6-1 in the second replay (at Stamford Bridge) – Norwich’s heaviest ever League Cup loss.

If the league was bad enough, then FA Cup meetings between the two have been equally disastrous. The first meeting came during the 1938/39 competition, Norwich was thrashed at home 0.5. It was even worse in the 1980/81 season, where they suffered a 4th round, 6-0 stonking on Moss Side, and with it, another unwanted record was set – Norwich’s biggest-ever FA Cup defeat.

The Citizens (did you know – this was also our first nickname in the pre-Canary days) made it to the final that season (beating Ipswich in the semi). In the final, they met Tottenham, a game remembered for the Ricky Villa wonder goal. The Manchester City boss at Wembley that day was a chap very familiar in Norfolk – John Bond.

Bond is a Norwich City Hall of Famer. A big personality, he was the darling of media and supporters alike. A typical, charismatic, 1970s, all-powerful football manager, Bond was very popular at Carrow Road, where he was credited with establishing Norwich in the top flight while, at the same time, playing an easy on the eye, brand of football.

This all made his high profile departure, to lead a revolution at Manchester City, all the more painful for the Canary faithful. At the time of leaving, he was Norwich’s longest-serving manager (a record beaten only by his successor, Ken Brown).

Shortly before Bond relocated up north, there had been another significant transfer between the two clubs. On 11 March 1980, Norwich and England striker, Kevin Reeves became only the fourth million-pound man in football history. Peanuts today, especially for super-rich Manchester, but back then it was a big big deal.

As disappointing as it was for Norwich to lose their star striker, it proved an astute bit of business, as a new River End Stand was built, while Reeves career was injury-stricken.

Both he and Bond failed to lift Manchester City to the next level.

Heavy defeats and big-name signings seem to be the recurring themes to the story between Norwich and Manchester, the former likely to continue in the foreseeable future.

Since Manchester City’s emergence as a global giant, Norwich have suffered a 5-1, a 6-1 and, on 2nd November 2013, a painful 7-0, but there has been some sprinkles of joy. Who can forget that wonderful solo effort by Johnny Howson to seal a famous 2-3 win in The Etihad.

And for those heading to Carrow Road, this Saturday, fearing the worst, remember the last time the two met on 12th March 2016.

And that's before you even get into the coronavirus considerations and returning lockdown scenarios around Europe etc.

Going to be so challenging for #NCFC to navigate, as it will for all national FAs and a lot of clubs. Strange times.

Looking at international break. Weds 7.45pm Nations League games for #NCFC players ahead of trips to Boro on Sat & Stoke on Tues.

Meeting mates pre-match in The Woolpack. The feeling of pure elation that accompanies a goal. The post-match discussion over a beer or two (😉) in the Angler. The whole damn thing 😢 #ncfc