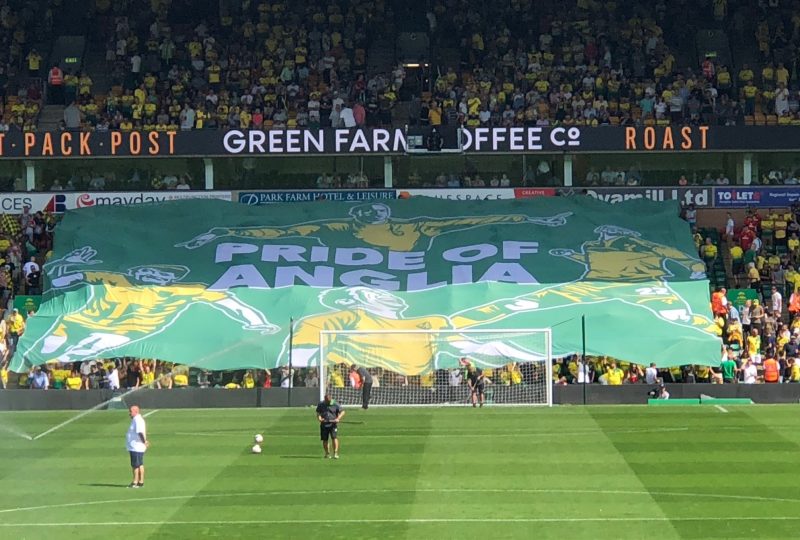 The Premier League is a strange, complicated, unforgiving beast.

When you’re Norwich City, it’s even stranger, even more complicated and even more unforgiving.

We promised ourselves, at the end of last season, that it would be different this time around; that we knew it would be really tough at times but because of the club’s new culture and the ethos, the togetherness would be steadfast.

Everything felt different. Carrow Road felt different. The brilliant work done by the good people of Along Come Norwich and Barclay End Norwich permeated beyond the Barclay, the vibrancy not restricted to those waving and carrying aloft the flags.

The whole ground was vibrant. It buzzed and fizzed like a good ‘un. Better than ever before.

It felt like the evolution taking place within the club had extended into the stands and beyond. We felt like grown-ups.

And then in the summer, armed with the smallest Premier League transfer pot known to Man, we left it all in the capable hands of Stuart Webber and Daniel Farke. We trusted them implicitly.

Stuart made expressly clear that the transfer spending would be in the minimal category and instead, as it transpired, a sizeable chunk of the money available was sensibly used to tie down and reward those who had been part of that amazing journey.

Few, if any, baulked at the prospect. These guys had earned our trust. They had plenty of credit in hand.

A traditional Norwich City summer when the Premier League awaits would be full of angst, frustration and refreshed browsers as we await news and rumours of big-money, big-name signings. But none of that happened. We knew to expect not very much and we were cool with that.

And as those five new names were drip-fed through to us, we were happy. All logical, all needed and all fitted the Webber template.

The rest of the football world mocked. Of course they did. How could anyone expect to survive their first season back in the Premier League by shelling out the quoted £750,000?

But still we were cool with it. We, after all, were taking a different route. Trying, in our own way, through necessity, to show that through modern, innovative thinking there was an alternative way. That survival could be achieved without relying on billionaire owners who, through various means, will happily bolster the transfer fund to the tune of nine figures.

We felt together. As one.

We spoke many times of the need of that togetherness to remain, especially through the fallow periods, and how important it would be to remain united when the inevitable bad days come along.

What none of us had planned for, particularly Webber and Farke, was an injury crisis like no other. One that would dominate the opening two months of our season and impact on every single aspect of the playing side.

So severe has it it been, almost all of those involved describe it as the worst they have ever encountered. The stats tell us it’s the worst any of us have ever seen.

Yet, against this backdrop, the toys started to depart the pram last weekend. Despite all the mitigation, despite all the promises of calm in adversity, despite all the talk of trusting the Webber model, the angst took hold. And it wasn’t particularly pretty.

The away defeats at Burnley and Crystal Palace were, alas, the type of results that you suffer when you’re Norwich City – even on a good day. But both were suffered in the face of extreme adversity – with a squad that was less than threadbare.

The Villa game was when it all capitulated; when we had nowhere left to go but over the cliff edge. When all the patches and sticking plasters could take the strain no longer.

Then came ‘injuries are no excuse for not marking tightly’ and ‘can’t blame the injuries for them giving the ball away so cheaply’, and while there’s the makings of a point there, those who have played the game know how difficult everything becomes when your resources are stretched and the square pegs end up in the round holes.

Things do go wrong; things are no longer in sync, and players try and do a little bit extra to compensate. It rarely works for any length of time.

I’ve also heard the ‘well they managed it against Man City’ argument, but that was very much a one-off. An evening of such magic, the type of which comes along once a decade. To use that as the barometer going forward was never going to work.

But, it also proved that this group are not the bad players some are now trying to paint them. Any team and any group of players who beat Man City in those circumstances have a little something about them. You don’t fluke a win against sides of that quality.

So it is with perfect timing that Webber has given a ‘season-update’ interview to the club’s official site, where he describes the impact of the injury crisis better than I ever could and where he crucially repeats the “can’t get too high and we can’t get too low” mantra.

Quote 1: “We’ve got to stay level, that’s the supporters as well”.

As ever, it’s a fascinating read from someone we’re so lucky to have and, as per, he articulates where we are and where we are heading with huge dollops of realism. If you haven’t it’s here.

So, rather than listen to the wailers, the doom-mongers and those who await the arrival of the Four Horsemen of the Apocalypse, I’m going with Webber’s take on it.

Quote 2: “We need everything to point in the right direction for us to be successful, but we’ve already proven that we can at least compete in games at this level and we’ll give ourselves a chance.”

And for now, that’s good enough for me.

WE ARE CHAMPIONSHIP!! 😁🙌 #ncfc #WelcomeBack

#canarycall Seeing as the majority of #NCFC fans and club always turn on managers that have brought us success. I think that Delia & Wynnie should sack Farke and manage the club themselves next season. Alternatively, there's always Nephew Tom 💛💚😂

I hope we can give this man one hell of a send-off, after a successful season, in a year's time 🙏 #ncfc