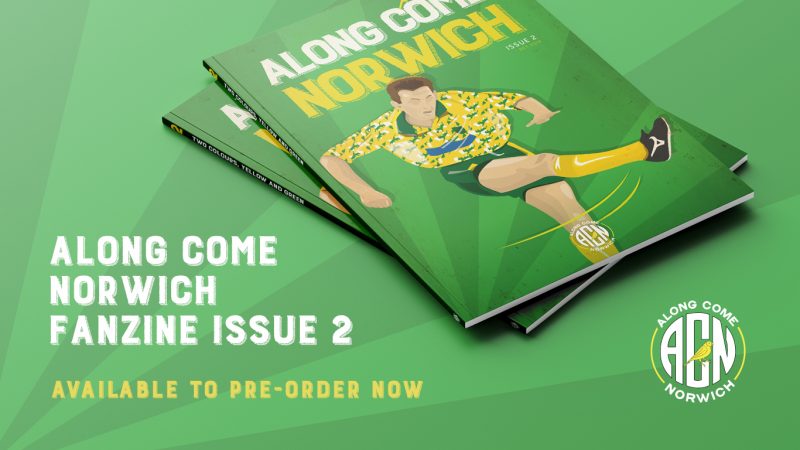 Remember the heady days of 2018/19 when everything was wonderful and we won loads of games and we all got along?

Well at the heart of that were the good folk of Along Come Norwich and Barclay End Norwich, who with the help of more than a few flags transformed Carrow Road into something it wasn’t – which was noisy and vibrant.

Along the way, and as part of a fund-raising drive to add to the flags and atmosphere, they produced an old-school fanzine with a modern twist. It went down a storm and so they’ve gone and done it again… with a little help from some friends.

ACN co-founder and once of this parish, Jon Punt, spoke to me about the project…

So, fanzine number two incoming then, Jon? I know from our conversations how much time and effort the first one took. Yet, you and Ffion still decided to go for another … gluttons for punishment, a labour of love or is it all about the flags?

JP: Truth be told, it’s a combination of all three. The response we received for Issue 1 was magnificent, it really seemed like everyone appreciated the time and effort that had gone into the whole project. So to anyone who bought one – THANK YOU.

Clearly it helps that we had/have a tremendously talented bunch of writers on board, but to accompany that the design of the whole issue (expertly crafted by Stephen Lister, then expertly edited by Ffion) was, in my opinion, a thing of beauty. I think we’ve replicated that again too.

Putting that aside though, and as I think I probably said ad nauseam last time out, it’s genuinely lovely to have a physical document you can hold in your hands and just escape into for a while. It’s a throwback, maybe even a little bit of a vanity project, but it worked last time out, so here we are again.

The first one was brilliant, apart from that nonsense about the 80s. How have you gone about making this one better?

We’ve listened to the feedback and tried to make this issue slightly bigger, all while keeping the price the same. The success of Issue 1 helps, as other people were keen to get involved. Michael Bailey of The Athletic has kindly penned some words about a famous Along Come Norwich moment, FourFourTwo founder Karen Buchanan waxes lyrical about Farkelife, Forest author David Marples gives us an alternative view of that Boxing Day comeback and commentator Stuart Hodge tells us about a resurrection story with an Italian flavour.

Alongside all of that great stuff, you’ll find some of the best Nodge writers around from the online fansites, all celebrating Norwich City Football Club, past and present.

Getting Chippy Crook involved was a proper coup… must have been great chatting to a bonafide legend, especially for those of who had the pleasure to see him play.

Chippy was a hard man to pin down, but it was all worth it. Even after just over an hour chatting with him, it was clear how much affection he has for Norwich. I was keen to get him, purely because his full NCFC story has never really been told, but I really only had the time and scope to touch on the big ticket stuff. Europe, relegation under Deehan/Megson, *that* move to Ipswich, life under Gunny the Gaffer and coaching with Lambert. Hopefully people like it.

In addition though, Matthew McGregor managed to get some time with former Chairman Ed Balls, who was incredibly candid about the appointment of Jez Moxey, the signing of Naismith and just how worried they all were when Maddison got injured at the back end of 2017/18.

In terms of numbers, I know the first one sold out in a matter of days. Is this one planned on a similar scale, or we going further and wider with number two?

We’ve gone for a slightly larger print run, purely based on the fact we sold out last time. The thing is, the number we have printed is always a bit of a shot in the dark, so I’d really encourage people to get behind it. Ultimately we want to make sure the project is sustainable (self-financing – sound familiar?) and that really depends on fans spending their hard earned cash, which we realise can sometimes be a push in these modern times.

It’ll be interesting to see how we go with this issue, especially given that the feel good factor isn’t quite as prominent this time around. What I’d say to people thinking about buying a copy though is, give us a try. We realise the price point is at the higher end, but we’ve tried to create a fanzine with a premium feel which we hope will be just as collectable as some of the efforts of the past. Y’Army, LAOTTA, Ferry Cross the Wensum – those guys did a great job with the resources at their disposable at that time. We’re trying to take things to the next level in terms of look and feel.

Anything specific planned for the funds from mark II, or going into the pot?

It’ll go into the wider pot, but we had a really positive meeting with the club recently about future displays, and trying to expand what we do. As a certain Mr Webber sad recently, you can’t get lazy with these kind of things. Some of the stuff we’d really love to do could extend into five figure amounts for a display, so any purchases of fanzines, badges, T-shirts or mugs really help and are very much appreciated.

Probably best not to reveal anything specific just yet, as these things are all subject to approval from a health and safety perspective, but we’re being ambitious, within the constraints we’re working with. Keep your eyes on the Barclay over the coming months…

You at liberty to divulge any type of plans that you guys and the BE Norwich lads have for this season? I was unable to make the live event, but sounds like a stormer that was the perfect precursor to beating Man City!

We’d love to do something again, but we really need to reflect and learn the lessons from last time out. The stuff outside the 1902 bar seemed to go down better than the Russell Allison lounge, purely from an acoustics point of view. If it helps get those kinds of results though, then we’d best start planning to do one for every game!

The club are really keen to support those kinds of events, which is great. We just need to work out how we can best generate atmosphere for the live stuff, then transfer that straight into the stands for when the boys enter the pitch.

Finally, while you’re here… thoughts on the season so far and where we’re heading. I know I can rely on your toys staying firmly in the pram JP.

Yeah, no bed wetting here. The absence of real football over an international break helps to put our injury crisis into context in my mind. We’re down to the bare bones and you could argue that we’ve just about punched our weight, or slightly above it.

The more negative among us will point to the fact that there’s not many actual starters that are currently absentees, but it’s more about the fact our spine has been so badly hit which is the salient point for me. A Trybull or Tettey, plus Vrancic, Krul, Zimmermann – they’d all be certain starters in my preferred XI and we’re sorely missing their individual attributes. Get them back and we’ll be competitive against most sides. Hopefully this fortnight allows most of them to get back to some kind of fitness, and Hernandez’s pace could be a real game changer off the bench when he’s firing.

I think we’ll be ok (but then I always do), but it’ll be tight. My only worry is that the perceived ‘better’ sides in the league are all faltering this term, which in turn means points are more evenly dispersed across our rivals. This could be a season where 38 points isn’t enough.

Yep, have had that exact same thought process. A runaway top-six is sadly what we need and that’s not happened so far. Agree too about the absentees not all being starters but what is does is add greater pressure on those who do start to deliver and in trying that little bit harder, that’s when the individual mistakes occur. I too still think we’ll be fine, but we do need more fit bodies.

Cheers for all of that JP. Top man.

You can pre-order your copy of Along Come Norwich – Issue 2 now, just click here for further info