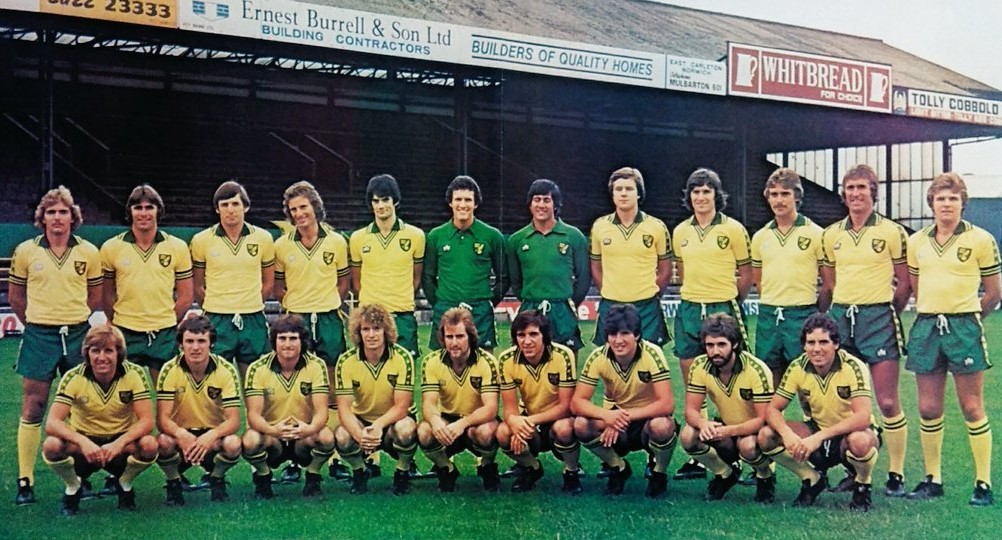 In part two of the trilogy, Ed picks it up with Viv still enjoying life at Fulham…

Life was good for Viv down by the Thames. The culture of the club and the high calibre of teammates he was now playing alongside certainly brought his game on.

“I grew up fast at Fulham. Became a lot more confident in myself and my game, a little bit arrogant even. That’s what I tried to take on the pitch with me. I was strong, I had a bit of pace about me and I could score goals”.

Viv played and scored in one of Fulham’s pre-season matches prior to the 1976/77 season. It was in the old Anglo Scottish Cup tournament at Craven Cottage, a 1-1 draw against the Canaries.

Viv thought nothing more of it but, a little over a month after that game he was summoned to Alec Stock’s office.

“I wondered what I’d done wrong! Alec didn’t mess about, he said that Bondy (John Bond) had been on to him and that Norwich were interested in signing me as they needed a striker to replace Ted MacDougall.

“I wasn’t interested in moving and said so. I was happy at Fulham and didn’t feel as if I wanted to go anywhere else. But Alec wouldn’t listen, he went on to say that things were starting to happen at Fulham, new people were getting involved at the club and he thought that meant he probably wouldn’t be there himself for very much longer.

“He summed it all up by saying, ‘personally speaking Viv, I think you should go’.

“What could I do? I went up to Norwich to have a chat with Bondy and he sold the club to me. No problem. He was quite a character, a little bit of this, a little bit of that. But I could tell he wanted me at Norwich and that he was a manager who looked out for his players. So after not wanting to leave Fulham, it became an easy decision to do so in the end.

“I moved into a place near Long Stratton. There was a stud farm near us in the village which was really peaceful. We loved the country life we had up there, it was perfect as far as we were concerned, for bringing up our daughter. And I loved the coaching sessions that Bondy put on. He wasn’t, maybe, quite so good on the actual man-management at times but I think that is because he just wanted us to do well as footballers, he perhaps didn’t see that other side of us sometimes.

“Having said that, he did look after us. We’d all gather in the players’ lounge after a home game and he’d buy us all a pint. He’d also pay for our tickets so we could go along to the PFA Dinner at the end of that season as well as ensuring we stayed in a nice hotel.

“But it didn’t pay to disagree with him on things, you never got anywhere if you had a different opinion to Bondy about something. I learnt a lot from him which I ended up taking into coaching and management myself. I remember, even at the time, I decided I’d be remembering and applying all the good things that I learnt from him whilst ignoring the things that we didn’t agree on.”

Viv’s Norwich career started well. He made his Canaries debut in a 0-0 draw against Derby County at Carrow Road on September 18th 1976. A 1-1 draw at Tottenham (for whom a teenage Glenn Hoddle scored) followed before, on October 2nd, Viv scored his first Norwich goal in a 3-2 home win over Newcastle United. Three days later he did so again in another 3-2 win, this time at QPR. 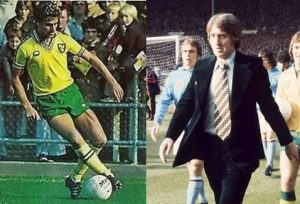 His best performance of that season came in the New Year’s Day game at home to Leicester City when he became a member of that special breed of players who have scored a top-flight hat-trick for the Canaries. Norwich won 3-2 with one report of the game describing Busby as ‘rampant’.

“I made a lot of mates at Norwich. Ryano (John Ryan) of course, who now lives near me out in Spain. We’d been together at Luton. Jimmy Neighbour, Graham Paddon and Roger Gibbons as well. My best buddy at the time though was probably Kevin Keelan. Now he was a lunatic. I’d watch him in training, he did NOT like to be beaten, even during a training session. He’d make sure you knew that as well, he’d come up to me and say, ‘… you’ll never get it past me today’. He couldn’t half punch a ball! I roomed with Keelo on away trips and absolutely loved him to bits, still do.

“Bondy’s coaching was a different class. It was all about passing, his mantra was ‘pass, pass, pass’. Keep moving, don’t stand still. As much as I had enjoyed my time at Fulham, I’d never had coaching of this standard and learnt so much about how to play the game but not just as a forward but as an overall player with a much more rounded outlook about the game. But how could you not improve as a player when you had so much quality around you. Duncan Forbes, he could play the game you know. Colin Sullivan, another good player. Then, of course, there was Martin Peters”.

Another reverential silence follows. I break it by pointing out to Viv how fortunate he was to have enjoyed the company of both Bobby Moore and Martin Peters at two of his club sides.

“Yes. Martin was wonderful to play with. His attitude was ‘let’s go out and play’. And he did”.

I asked Viv if he remembered fellow MFW contributor and all-round journo and broadcaster Mick Dennis accompanying the players on the coach to Norwich’s away games?

“I remember Mick. He was alright. Not like at Sunderland. We’d have six or seven, maybe more local journalists covering everything that the club did. They were an evil bunch”

Back to all things yellow and green on the pitch and that 1976/77 season, the only full campaign Viv had with Norwich. I mention that he ended it with 11 goals from 17 appearances, scoring stats that would unquestionably have been better had his season not been interrupted with a series of niggling injuries.

Norwich finished the 1976/77 season in 16th place. A little disappointing, perhaps, but there were grounds for optimism at the start of the following campaign which commenced with a 3-1 win at West Ham, the Canaries’ first away win in the league for nearly eighteen months.

Viv started the game playing in attack with Kevin Reeves and, despite a 4-0 defeat at Manchester City on September 3rd, a late Roger Gibbins goal against Bristol City a week later meant that Norwich were sat in ninth place and looking more than capable of holding their own in the top flight for another year.

That game against the Robins turned out, however, to be Viv’s last for Norwich with his sudden demise from the first team in the wake of that match as much a surprise to him as it was the club’s support, especially as the Canaries start to that season, if not spectacular, had certainly been a promising one.

“We went down to West Ham on the first day of the season, played well, won convincingly. First away win in the league for ages. So all the boys were sat on the coach afterwards in a good mood. Except that someone has got one of the local papers that has a big preview of the game in it. It includes a few words from Bondy that didn’t exactly speak of him having much confidence in us.

“ ’We’ll need our fairy godmother to get a result here’ was what he said. What a gee-up for the lads. It’s a good job we saw it after the game. But even though we’d won and played well, he’d still given us a bollocking in the dressing room afterwards. I was sat there ready to have a go back at him, but the lads were all looking over at me and saying, ‘…shut up Viv, keep quiet…don’t say anything’. Most of them were more used to him and his ways than I was, and I guess they just wanted to get home. But it wasn’t right what he was saying. Give the team a bo11ocking if they haven’t played well yes, I’ve done it myself. But after a 3-1 away win on the first day of the season? Come on!”

The bo11ockings didn’t end there.

“Second game of the season, 1-1 draw against Middlesbrough. We’re in control but they nick a point in the last few minutes. Come off, dressing room, another bo11ocking. I’m even more wound up this time but, again, the lads are saying to me, ‘… leave it Viv’ – so I do.

“A few days later we’re playing QPR at home. We’re bossing the game but, in the second half, they come back into it and the game ends 1-1. Back to the dressing room, everyone is quiet as if they know what’s coming next.

“Well. I’ve never heard a tirade of abuse like it in all the years I’ve been in the game. Bondy absolutely lays into everyone. He’s going around the team, one by one. When he gets to me, it’s full-on abuse for two minutes. He then moves on to Jimmy Neighbour and does the same to him. Before coming back to me. Then it’s off to someone else before, again, he comes back to me and lets me have more of the same. I’ve had enough by now and none of the lads are going to prevent me from having a go back”.

“Excuse me gaffer but that’s four points from our first three games. You’d have been delighted with that at the start of the season”.

“And with that, I take my shirt off and throw it at him.

“Bondy storms off to the physio’s room. I get my boots off and start to change. But he’s soon out again and comes right over to me, puts his finger on my nose and says, ‘… that’s a two-week fine for you for back chatting to the manager’

Bond’s reaction was to leave Viv out of the squad altogether for the Canaries’ next match, a League Cup tie against Burnley which saw Greg Downs, then only 18, take Viv’s place in the team. He missed a good chance to score and Norwich lost 3-1.

Tomorrow, in the third and final part of Ed’s interview with Viv, they talk about how his Carrow Road journey ended and how him and Bondy eventually buried the hatchet.