On 11th October myself, Anita Byrne, Ian Mitton and Dave Coleman walked down the players’ tunnel and up the steps to stand pitchside at the Guiseppe Meazza Stadium – the home of AC Milan and, more importantly for Norwich fans, Inter.

Paying 18€ we were able to take a tour of this famous stadium, visiting the dressing rooms, standing pitchside, and walking around the players’ and fans’ seating areas. As Ian and myself made our way up into the stands, we found roughly where we stood on 8th December 1993, and realised that we must have stood in close proximity back then.

On that misty day in Milan, Norwich City played their last game in their UEFA Cup run, but what a journey it was to get to this iconic stadium – both in 1993 and, now, in 2019.

This story starts back in February 2019. David Powell persuaded both myself and Anita to attend a launch up at the Nest. It was something about a charity drive in Europe, so we said we would go along to find out more.

On that night, Jake Humphrey explained with great enthusiasm that Credo Asset Finance in collaboration with Norwich City CSF would be holding the Canaryball Rally – a charity rally to raise money for Phase 2 of the Build the Nest campaign.  The rally would see a maximum of 20 cars undertake an epic five-day drive from the Nest that would take in Arnhem, Munich and Milan, stopping off at the Nürburgring on the way back.

That night, Team U Pukki was born, as David signed us up and committed us to raise a minimum of £5,000 to take part. In the next few months, the rally was all David could talk about. He persuaded Dave Coleman to join the team, Thurlow Nunn of Dereham to loan us a car, and Emkay Plastics to pay for our fuel.  We also undertook a number of fundraising activities, including online auctions of club and F1 memorabilia as well as a charity waxing, to raise the £5k.

Unfortunately David would never get to go on the rally, as he was so tragically taken from us on 14th August on the way home from an evening watching non-league football at Wroxham.

Not completing the rally was never an option, however. After speaking to David’s parents, we vowed to carry on and Ian joined the team.

Just after 7am on Wednesday 9th October 2019, 17 cars set off from the Nest, waved off by Norwich legend and UEFA goal-scoring hero, Jeremy Goss.  Thanks to road closures and torrential rain making our journey a little longer and more difficult, we finally arrived at our hotel in Arnhem at 9.15pm – too late to visit Vitesse Arnhem’s ground.  Therefore, we all planned to go there early the next morning before we set off on our long drive across Germany to Munich.

The stadium where Norwich drew 0-0 against Vitesse Arnhem on 29th September 1993 is now a housing development, but at 9.15am on 10th October, we all gathered outside their impressive new stadium, the GelreDome, for a group photograph.

I didn’t get to go to the match back in 1993 as someone had to stay behind to man the Club Shop at Carrow Road. As the junior of the marketing department, I had to stay behind while my boss and another colleague went to the game. I was promised that if we got through to the next round, I could go with my colleague and if we won that, I could go to the next round with my boss – as it turned out, I got the best deal!

As part of the Canaryball Rally we were all given instructions along the way to collect items and photographs for a scavenger hunt – one was to collect Vitesse Arnhem memorabilia. We therefore made our way over to the club shop, where we were promptly told that they were shut until 9.30!  We tried to make them understand that we had come all the way from Norwich and we needed to get inside, but we were told that “No, we’re not open until 9.30!”

Merchandise purchased, we started on the long journey to Munich, via Köln – to see the RheinEnergieSTADION for extra points on the scavenger hunt!  We arrived at the Olympiapark in Munich in the dark only to find that the football stadium was closed.  We made our way round the stadium to the end where Norwich supporters stood back on that famous day, 25 years and 355 days before. Standing outside the stadium I pictured that very special Jeremy Goss goal and the celebrations afterwards.

As I am writing this piece, the news has broken that Norwich legend, Duncan Forbes has passed away. On that night of 20th October 1993, I remember celebrating our victory with Duncan and other members of the Norwich City staff that I was so fortunate to be working with at that time.  It’s a memory that I will forever hold dear in my heart. 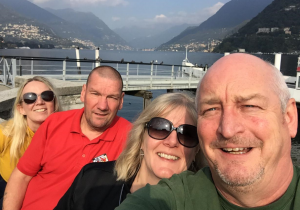 Before we left the Olympiapark, we had one more scavenger item to find for the day – Elton John’s hands! As it turned out, we were the only team to find them – an imprint of his hands on the walk of fame.

The next morning, we left bright and early heading for Milan. Driving through Germany, Austria, touching the border of Lichtenstein, Switzerland and into Italy. We stopped off at Lake Como and scored some more points with a photo of Serie C team Como 1907’s ground.

It wasn’t long before closing, but we managed to get to the San Siro – or as I like to correct everyone, the Giuseppe Meazza Stadium – in time to take a tour around the ground.  As at all of the grounds, club merchandise was purchased, the obligatory photograph taken, and a Norwich City sticker left on a passing lamppost before we left the scene.

We travelled back into Switzerland to our hotel for the night for a celebration dinner hosted by Credo where the winner of the Canaryball Rally challenge was announced. Thanks to Ian’s dogged determination that we were going to find Elton John’s hands, we won!

We were given a nice big shiny trophy that we somehow had to get back to Norfolk safely.  It did alright until we arrived back in Norwich, where I braked and the trophy came crashing off the back seat!  No damage done thank goodness.

Before we could set off for home, there was one more overnight stop, at a hotel the Nürburgring which was a true petrol head’s dream. The next morning, after a photo opportunity outside the entrance to the Nürburgring, and a sticker left on a lamppost, we set off for Norfolk.  No stopping off at stadiums on this final leg, as the aim was to get to the channel tunnel in good time and to get home.

We arrived back in Norwich around 9pm, 110 hours after we set off on the Wednesday and 2,300 miles later.  I wouldn’t have missed this adventure for the world. We raised an amazing amount of money for the CSF – and continue to do so – and revisited memories of 26 years earlier.  However, it was bittersweet as the force behind our team didn’t see his dream out.

This journey was for you, David.

So spurs giving us Winks, Sessengon next season? If Max goes I’ll take Tanganga as well. Dwight Gayle to help Pukki and Hugill. Guehi if Swansea bottle it and definitely try and get Hourihane to solve our number 10 troubles... my wish list #NCFC @Kenty1985

Thank you again to @pinkun for having me on to discuss the Brentford match, Luton on Saturday and trying to figure out how an American became a Canary supporter. #NCFC

I’m back at NR1 tomorrow as #NCFC host #LTFC. The Canaries will be looking to record their seventh consecutive victory after seeing off #BrentfordFC in midweek, extending their lead at the top of the Championship to ten points.

✍️ My piece for @ProstInt