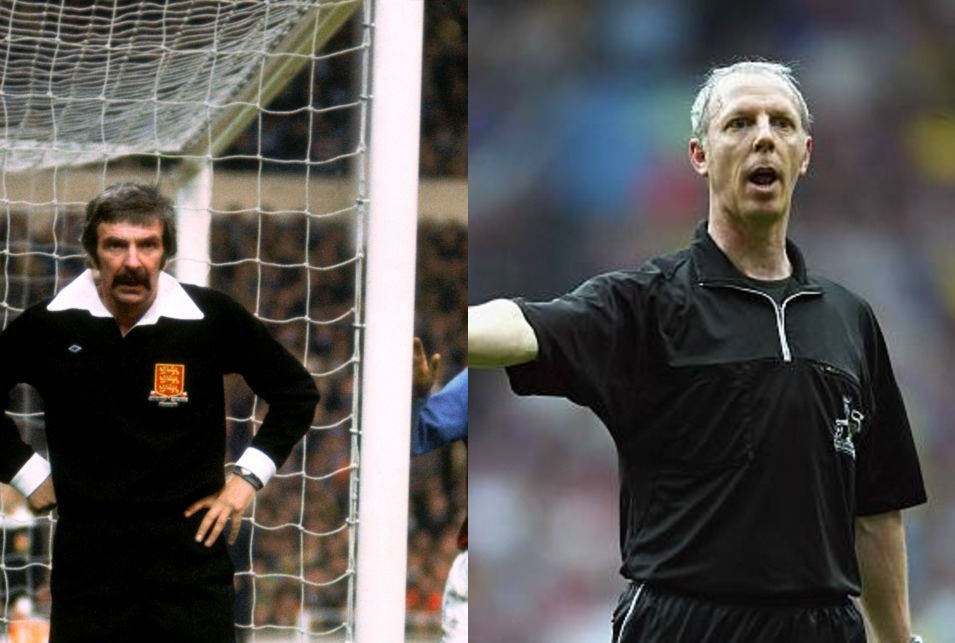 Please don`t be turned off before you read the article, thinking this is another tome on the bane of our lives at the moment, which is the  VAR catastrophe! It is as far removed as is possible, because it is a personal recollection of two extraordinary referees who have played a pivotal role in the history of Norwich City.

It’s personal because one taught me at primary school and the other was one of my closest friends when I was teaching in Scunthorpe. Much more importantly, they both were refereeing Norwich in what both described as their worst moments in refereeing… 32 years apart!

Let me start with Gordon Hill, an extraordinary man and an extraordinary referee. Gordon taught me at primary school, a teacher who was memorable for his humour and desire to make every lesson as interesting as possible.

I`m sure he was the one who planted to the first seeds in my mind that teaching might be worth pursuing. However, as a soccer-mad pupil, it was Gordon refereeing our school matches and taking us to games that most resonated.

Imagine our despair when he left to take up a headship in Leicester!! He also was progressing in the world of refereeing and was soon taking charge of big games in Division 1. Gordon was known as the players’ referee because he understood the pressures of the game.

If a player swore at Gordon, he got the same and more in return. His respect amongst some hard men was the stuff of legends. Norman Hunter, Chopper Harris, Tommy Smith and yes I’m sure our own Duncan Forbes amongst others would relish knowing Gordon would be refereeing, as did managers like Shankley, Busby and Revie because he treated the players as adults playing an extraordinarily tough game.

He wore his hair fashionably long and sported a flowing Mexican moustache. The players loved him. The FA and Football league didn`t however because he was seen as something of a rebel because his style was so unorthodox.

This scene-setting is important because of what happened in the match I am going to refer to. One thing is for sure. If Gordon had refereed in the modern era, the post-match analysis would have been very entertaining trying to decipher what he said to the players rather than the other way round!

In 1972/73 Norwich embarked on a memorable League Cup run and reached the semi-final to play Chelsea in a  two-legged tie. City won the first game 2 0 at Stamford Bridge (oh for that this season!) and the second leg was played at a packed Carrow Road. The referee was Gordon Hill on a still night just before Christmas.

It was misty but the game could commence. It was a classic and Norwich were winning 3 2, therefore 5 2 on aggregate and surely at Wembley. But like an Arthur Conan Doyle mystery, the fog descended with a vengeance till nobody could literally see more than a few feet in front of them.

On 85 minutes, with Norwich winning 5-2, at a packed Carrow Road, Gordon Hill abandoned the game! When interviewed afterwards, he was distraught, saying how sorry he felt for the players and fans and it was by far his worst moment in refereeing. But he did it because he was right and his integrity was second to none.

I wonder what big Duncan had to say!

The story has a happy ending because in the replayed match in January, Steve Govier, replacing the injured Forbes, scored a soaring header in front of 34,000 fans and Norwich got to Wembley, only to lose 1-0 to Spurs.

As a postscript to this story, I came across a comment from a Chelsea fan who said, “I`ve no sympathy with Norwich. It`s their fault they built their ground next to a river!”

Gordon also played a pivotal role in the League Cup final of 1975 when he refereed Norwich v Villa, his last big game before emigrating to America to take up a top educational post. Not a memorable game if truth be known but certainly noteworthy for one of the greatest saves seen at Wembley.

Unfortunately, it wasn`t the brilliant Kevin Keelan who made it, but  Mel Machin soaring upwards, backwards and sideways at the same time to keep out a certain goal.

Gordon didn`t send him off, just gave the penalty which was converted at the second attempt by Ray Graydon and another 10 defeat for the Canaries. Can you imagine the furore if a referee in the modern game hadn`t sent him off!? But that was Gordon who always wanted to keep it 11 v 11.

I managed to contact Gordon through getting to know his son Matt through Twitter and I`m delighted that I did before he sadly passed away in March this year aged 91.

What a life he had and I`m sure the Norwich players he refereed in the ’70s will remember him fondly.

Jump ahead to April 12th 2004 and the promotion-chasing Canaries have a televised game against Reading away. Now what I am going to tell you sounds like a story from the brilliant Would I Lie to You and I bet 99.9% of you reading it think it`s a lie. I promise you it 100% true.

I travelled to the game with my son Andy and when I got there saw that the referee was Neale Barry. Neale was a long-standing friend of mine and we played cricket together as well as him refereeing in local league games.

Neale always wanted to be a referee and it was no surprise that he reached the very top in the Premier League. We were walking around the ground when a sleek limo drew up and out stepped Neale, his wife and his assistants.

“Wardy”, is the reply and we go over old times for a few minutes before departing for our respective pre-match preparations!

Before I go though, I utter the fateful words,” Anyway Neale, make sure you do Norwich a favour!”

Much hilarity as we say our farewells.

My next stage is the bar where I meet Martin Law and his mates; “Don`t worry lads, the ref is a great mate of mine and I`ve sorted it”.

Obviously my comment meets with the right amount of derision and then onto the game. Not a classic by any means and we were struggling to break down Reading until ten minutes from the end comes the moment!

A Reading defender clears the ball from the six-yard box, where it hits Neale on his back and bounces perfectly for Phil Mulryne to rifle an unstoppable shot into the top corner. How appropriate, when looking at divine intervention, that Mulryne is the one to profit!

Cue carnage in the away end and we hold out for a vital 1 0 win. I am, of course, delirious but then spare a thought for Neale. What on earth is he thinking now because he can`t disallow the goal as the laws stood then?

Reading are incandescent with rage and who can blame them but who cares? On the way back to my car with Andy, I  hear shouts of “Wardy, Wardy” and it`s Martin and his crew who look at me with newfound respect.

Truth or lie? You decide but if you don`t believe me, ask Andy Ward, Martin Law or more importantly Neale Barry!

I heard Neale being interviewed on the radio and my mind went back to 1972 as he more or less repeated the same words that Gordon had saying it was his worst moment in refereeing and how distraught he was.

So, in conclusion, I am personally privileged to have known/know two such great referees as Gordon Hill and Neale Barry and more importantly, two tremendous people. How strange that both would play such a part in not only my life but that of our beloved club.

While you’re here… there’s an upcoming event I’d like to make you aware of. On the evening of 21st November, at Carrow Road, the Norwich City Fans Social Club (better known as NCFSC) are holding a mental health awareness evening. It’s an important message and it’d be great to see you there. It’s free. 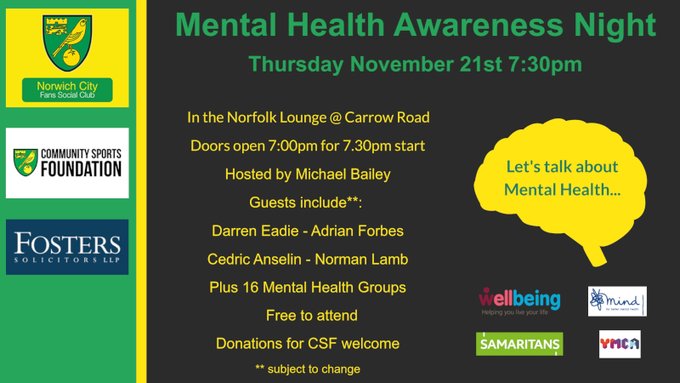