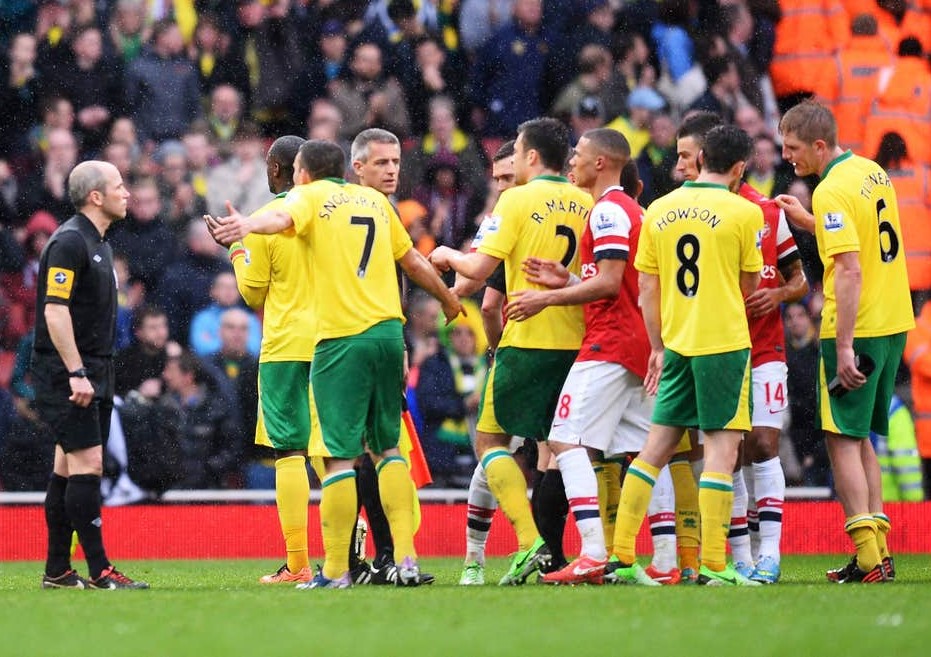 From one top-flight regular in Everton to another, Arsenal, who are next up at Carrow Road. The Gunners’ record is incredible. This season marks a century of continuous campaigns in the Premier League and its predecessor Division 1. That’s 100 years at the top table without experiencing the dreaded relegation – imagine that!

With a record like that there is no denying Arsenal FC are footballing royalty.

As such, it was many years before our paths crossed – certainly in the league. The first competitive game came in the 1951/52 FA Cup where a gap of two divisions was evident in Norwich’s 0-5 home defeat.

However, fast forward two seasons and Norwich would pull off a famous giant-killing. It was the fourth round of the 1953/54 FA Cup and City’s first trip to the marble halls of Arsenals iconic Highbury Stadium. Arsenal were English champions the prior season, Norwich mid-table in Division 3 South. A home banker if ever there was one but this was the FA Cup and a Tommy Johnston double produced a 1-2 win and with it the shock of the round.

Norwich was back dominating the back pages in 1972, this time in the League Cup fifth round and another surprising victory in Islington. By now both were equals in the league but the Arsenal team still contained many of those that had completed the League and Cup double in 1970/71 and as such were clear favourites. Norwich Hall of Famer, Graham Paddon scored a memorable hat-trick in a remarkable 0-3 away win.

Perhaps it wasn’t such a usual result. On the 23rd September 1972, at Carrow Road, we faced Arsenal for the first time in the league and again scored three goals. The 3-2 win marked a steady start to Norwich’s first season in Division 1 and it was a first-ever League win over one of the games so-called ‘big boys’.

This win began a good spell of home games versus the Gunners during the 1970s and into the 80s. In 12 home matches between 1972 and 1986, our record read as follows; Won six, drew four, and losing only twice.

There was a couple of high profile clashes in 1989.

The first came towards the conclusion of the 1988/89 season.  It was an exceptional season for the Canaries under club legend Dave Stringer. By Christmas, his Norwich side had lost just twice in 17 league games a run that included nine wins. Despite a dip in form, they were still in the title race on May Day 1989 and a critical trip to the league leaders Arsenal.

It proved a step too far as George Graham’s Arsenal cruised to a 5-0 victory. A defeat that finally knocked us out of the title race and one that propelled Arsenal to a dramatic championship, clinched just five games later, famously, in the very last minute, at Anfield.

Both sides carried their form into the following 1989/90 season. Arsenal had only conceded once at home by the time Norwich visited on 4th November 1989. Norwich scored three that day but Arsenal fought back to notch a late winner. The word fought is appropriate as that winner sparked a mass brawl involving 21 players. It was out of control and the FA came down hard fining both sides (Norwich’s fine bizarrely higher than Arsenals). A thrilling game was remembered more for the fight than the scintillating football that had produced seven goals.

Norwich and Arsenal have locked horns on 58 occasions, however of all these meetings one stands out head and shoulders above the rest – the 15th August 1992 is a landmark date in Norwich’s recent club history.

It was the opening fixture of the new Premier League era. It couldn’t have been a tougher start for Norwich as the pre-season favourites for relegation travelled to Arsenal, who many had tipped to win the first Premier League title. It was all going to form at half-time, Arsenal comfortable at 2-0 before an incredible second-half performance and goals from Mark Robins, David Phillips and Ruel Fox brought the most unexpected 2-4 wins, in context one of the Canaries finest away wins.

Statistically, it was a result that meant Norwich lead the Premier League after the opening set of games and they had scored more Premier League goals than any other club in Premier League history (yes I know it was only one game!). It was also a game that set the tone, a springboard, for the Mike Walker era, where City, for a season or two, competed with the best, playing an attacking brand of football.

We all know that the 1992/93 season concluded with Norwich finishing 3rd. But they still required a massive favour from Arsenal before they could claim a first-ever European spot. The equation was simple – if Arsenal won the FA Cup (following on from the earlier League Cup triumph) then Norwich would be playing in Europe the following season. With the whole of Norfolk watching, the final against Sheffield Wednesday, for the last time ever in FA Cup history, went to a replay and even then Arsenal’s winner was late, coming in the 2nd half of extra-time.

The scorer of one of the most important goals in Norwich’s season came from the head of Canary old boy, Andy Linighan. The Wednesday keeper that he beat? – Norwich Hall of Famer and fans’ favourite, Chris Woods.

Norwich suffered heavy defeats to the Arsenal ‘invincibles’ in our one season back at the top (2004/05) including a Thierry Henry inspired 4-1 loss on our final visit to Highbury.

We performed much better on our long-awaited debut at Arsenals new, glitzy, Emirates Stadium. Steve Morison amongst our goal-scorers in an entertaining 3-3 draw that typified the gutsy performances that came from Paul Lambert’s 2011/12 vintage.

Arsenal with their history and tradition are always a big draw in the fixture list. A team that has always been at the top table and a fixture laced with glamour and intrigue. On saying that, as history proves, Norwich have pulled out some big results against Arsenal in the past and boy do they need to add 2019/20 to those famous victories of 1953/54, 1972/73 and 1992/93.