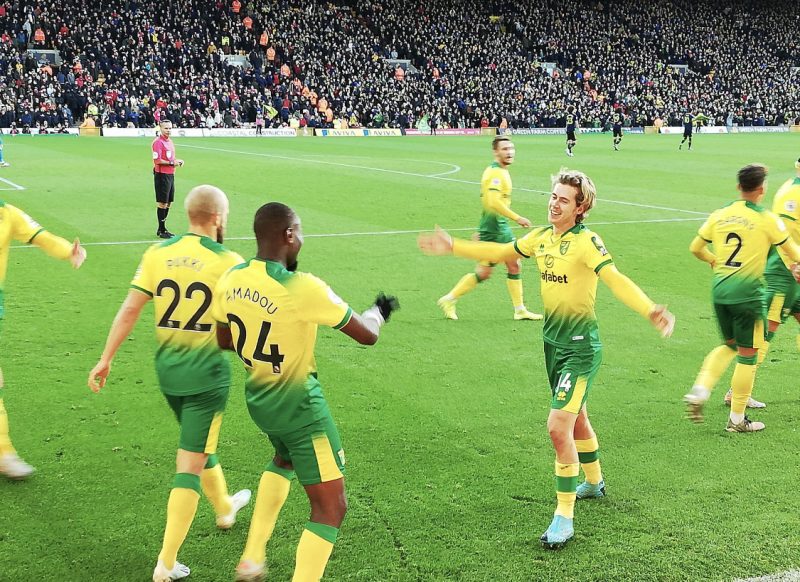 Prior to the arrival of Solkjaer’s Manchester United at Carrow Road, we were a little giddy; thinking that their stuttering form meant they were, quote, there for the taking. We paid the price and were reminded of the gulf in quality between the have and have-nots.

The Man City win had lulled us into thinking anything was possible but glorious evenings like that one in mid-September don’t come along very often. Not when you’re Norwich City. They require an extraordinary level of planet alignment

When it’s boiled down, we’re ill-equipped to regularly go toe-to-toe with the haves. As the bonafide kings of the have-nots, we will chuck in the odd grenade – like upsetting Man City – but in the cold light of day, most are realistic enough to know how difficult it is for us to live with the league’s Galacticos.

Why did it feel, in that second-half in particular, like we were going toe-to-toe with one of the so-called big six and coming out on top?

Why did it feel like they were hanging on at times and were reliant on a couple of worldies from Bernd Leno to earn a point?

Not bad for little old Norwich.

For all their travails this season, this Arsenal squad remains jam-packed full of quality. Expensively sought quality. They spend sums of money on players we can only dream of – £137 million in the summer, which included £72 million on Nicolas Pépé – and for the opening 20 minutes yesterday it showed.

Free of the toxicity that had built up around Unai Emery, the Gunners played with the fluency and swagger we have come to expect and, despite there being an element of City deliberately sitting tight, it needed an alert Tim Krul and an even more alert Onel Hernandez to stop them going ahead.

But in the face of a breathless onslaught, City held firm 2018-19-style. There is comfort in having the old gang being back together and there are few finer sights than Zimmermann and Godfrey high-fiving with Krul roaring his approval in the background. Feels like our happy place.

And it’s from that more-solid base that City now look like a team that can hurt others on the break – just as they did when Pukki did what Pukki does when his assured touch had Mustafi and David Luiz backing off. The deflection may have helped but it was the Pukki of six weeks ago, which is just what we need.

The Arsenal equaliser was a gut-wrencher but one the law-makers will insist was handled correctly. No doubt those at Stockley Park were giving themselves slaps on the back all around for getting the right decision, but while I’ve tried to be gentle with VAR in its formative stages, there is something that just doesn’t feel right about how this is affecting games.

Of course, Max Aarons was *just* encroaching but I find it hard to believe that there isn’t an element of the same with every single penalty kick. Was it a ‘clear and obvious error’ on the part of Paul Tierney that he didn’t spot Max straying millimetres into the penalty area in that split-second? Of course, it wasn’t.

And for all the technicalities involved, it rips the joy out what should be thunderous moments of sporting theatre, like a penalty being brilliantly saved and the immediate aftermath.

It was impossible not to feel for Krul, whose magnificence increases game-on-game.

City’s second goal had elements of the first in that they won the ball back with Arsenal pushing numbers forward, and let’s not underestimate the quality of Kenny McLean’s pass to send Hernandez clear. His pace worried the visitors all afternoon and on the occasion when he found the right pass, Todd Cantwell profited, with the assuredness of a seasoned Premier League performer.

That Master Aubameyang had to spoil our party was a shame but the attacking threat of Mezut Özil set-pieces – he did little else – was problematic all afternoon.

From thereon in it was pretty much all City, with the tempo and verve taking us back to last season and the type of football that got us here in the first place. In the Championship there would have been no Leno to spoil the party and it was one we would have gone on to win.

It still took a game-saving challenge from Ibrahim Amadou in the closing minutes to secure the point, however; just reward for a fine afternoon’s work particularly without the ball. With the ball at his feet, he’s yet to link with Tom Trybull in an Tettey-style but that will undoubtedly come. His overall contribution was magnificent.

So, a point. A good one. A deserved one. And that we’re a little pi55ed that we didn’t beat Arsenal speaks volumes for where we are right now.