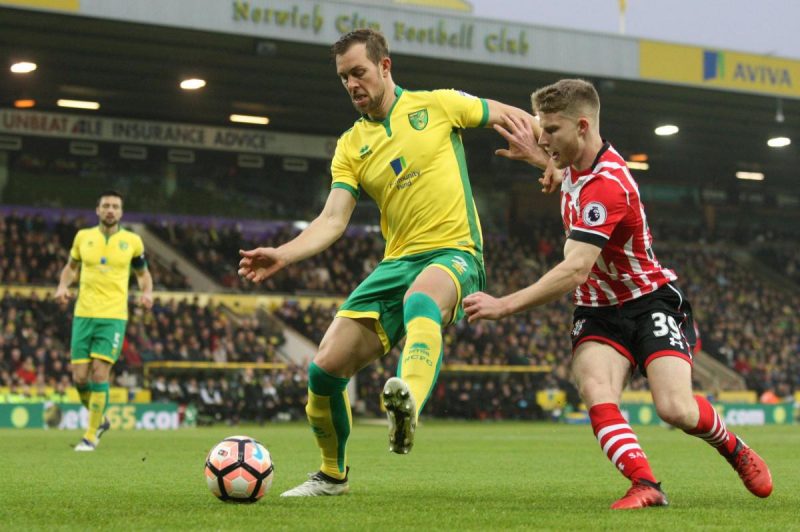 We’ve been up together and we’ve been down together. Rivals from way back to our amateur days, when football was in its infancy in Norfolk and Hampshire. This week also marks the return of an old friend from the Championship – The midweek fixture – as Norwich and Southampton do battle, for the 128th time, on Wednesday night.

Our first-ever home game as a professional club was against the Saints. It came in City’s debut season in the Southern League, not part of the Football League but a credible national division and a huge step up from the Norfolk and Suffolk scene.

The game finished honours even 1-1, at Norwich’s first ground on Newmarket Road. Southampton finished second that season and were slightly ahead of Norwich in their evolution, having already appeared in two FA Cup finals and were one of the original members of the Southern League.

With no promotion or relegation, Norwich v Southampton became a regular fixture producing a mixed set of results. In 1920/21 both teams joined the newly formed Division 3 South before Southampton’s title win the following season finally ended that sequence of meetings.

On renewing acquaintances in the Second Division there was a series of high-scoring games that over time has become a common feature of this fixture. Between 1934 and 1938, Norwich scored four goals or more in four consecutive home games.

Later in history, this fixture has continued to produce some eye-catching results.

There was a 4-3 at the start of the 1986/87 season in a game notable for the debut of a young apprentice Matt Le Tissier (who would score some cracking goals over his career against Norwich).

In 1989/90 it was 4-4 at Carrow Road, this time the game’s talking point centred on Robert Rosario’s 30-yarder, top corner goal of the season. A few years later there was a 4-5 home defeat which saved Southampton’s season, then in 2004/05, the Saints inflicted a painful 4-3 defeat on Norwich, a loss that went a long way to confining us to the drop.

With all these goals it is perhaps surprising that the first top-flight game between the two finished goalless. Especially considering the Southampton forward line that day contained not one but two Norwich City Hall of Famers, in 1985 Milk Cup winner Mick Channon, and 1960s goal-machine Ron Davies. Played on 23rd August 1972, the game was also noticeable for being City’s first-ever clean sheet at the highest level.

Saints manager that day was Ted Bates. Bates is a Southampton FC icon. At his death, he had served the club in many capacities over 66 years. He is best known for his 18 years in the manager’s hot-seat where he transformed Southampton from Division 3 South also-rans to First Division regulars and European campaigners. For Norwich, he was the one that got away, having been born in Norfolk and signing for his boyhood club only to leave without making a first-team appearance.

Talking of appearances, going to the other extreme was City captain, Ron Ashman. Ashman was the ultimate Norwich City clubman, serving the club as player then manager between 1946 and 1966. Ashman played 192 consecutive games, an ever-present over six seasons. His total of 662 appearances (many as captain) puts him second on the all-time list (behind Kevin Keelan). The last of those games was in October 1963, where the now player/manager Ashman signed off with a 1-1 draw against Southampton.

One of our most memorable clashes with Southampton came in the 1991/92 FA Cup. City were enjoying yet another good run in the famous old competition as a favourable draw saw them dispatch Barnsley, Millwall and Notts County to set up a quarter-final at Southampton’s famous old ground – The Dell.

7th March 1992, and a tight 0-0 meant a replay under the Carrow Road floodlights.

It proved to be an epic occasion that lived up to the hype. A capacity crowd were treated to bruising cup-tie with tackles flying in and end-to-end attacking. The Saints took the lead through Neil ‘Razor’ Ruddock but two red cards (one for Le Tissier) and a Rob Newman equaliser had left them clinging on. Relentless City pressure final told deep into injury-time as a looping Chris Sutton header sparked chaos in the stands.

The two FA Cup scores 0-0 and 2-1 were the same as those in the two league games as City came out on top in what was the final season in Division 1 before the Premier League arrived to forever change the face of English football. Not a bad record considering that Southampton had a young Alan Shearer in the forward line alongside the magician that is Le Tissier.

There was change too off the pitch, as that FA Cup tie was the last big game to be played in front of the old Barclay terraces that were packed to the rafters that evening. The last opportunity to experience the electric atmosphere of the Barclay-enders before the bulldozers moved in.

Norwich and Southampton have been through a lot since then. Both had dropped back to the third level of the English pyramid by the time of Norwich’s first trip to the shiny new St Mary’s Stadium during the 2009/10 season. The surroundings and quality of the game (despite the rainy conditions) were far from League one though as both produced a high quality 2-2 draw.

This followed an earlier 2.2 draw versus Southampton in our first and last appearance in the Johnstone’s Paint Trophy.

City, of course, went up that year on their way to back-to-back promotions. A feat matched by Southampton the following season and now we both find ourselves back in the Premier League. We have, over the years, shared a few relegations – 1973/74 and 2004/2005.

Let’s hope there is no unwanted hat-trick at the end of this season.