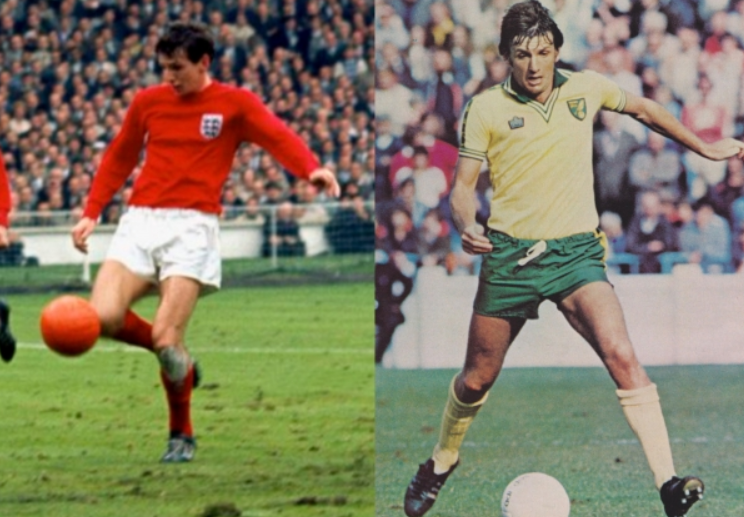 Two anecdotes say a lot about Martin Peters. Both require you to understand what the world was like more than forty years ago, when the A17 was even worse than now and when the coach carrying Norwich City to overnight hotels before away games rarely got out of low gears for long, winding stretches of the dreary journeys.

At the end of one mind-numbing expedition, as the players (and one young reporter) trooped in wearily, a hotel worker was standing in the foyer, looking noticeably nervous.

As soon as Peters entered, the hotel employee — wearing a red Bellboy jacket that stopped at his waist — approached apologetically.

Peters held out his hand which the guy grabbed and shook vigorously.

“I’ve followed your career since you were a youngster at West Ham. I always hoped you’d stay at somewhere I was working.”

Peters put down his overnight bag and asked the guy if he’d seen many of his games. He had. He began to list them, with details.

Other players swerved around Peters and the star-struck fan, making raised-eyebrow gestures to each other. But Peters kept asking questions and apparently listened intently to the long answers.

The rest of the party gathered in an impatient huddle by the lifts as assistant manager Ken Brown distributed room keys. Peters remained talking to the hotel guy.

When Peters eventually came into the restaurant, he still had his overnight bag. He had not been up to his room. Teammates made remarks, which would now be called banter, about how long Peters had been “trapped” by the fan.

“Nice man,” Peters said. “Without him, and all the others, none of us would be having steak tonight.”

On another long passage across the Fens — and remember there were no electronic devices to puncture the tedium — I joined the card school at the back of the coach. Manager John Bond stood up at the front of the vehicle and turned to look towards us. “You lot had better not be getting too heavy with the betting”, he shouted.

It was Peters who called out a reply. “No gaffer. It’s only Long John”. Bondy joined in the ripple of laughter which greeted that assurance that we were playing for silver.

But the truth was that I lost more than I could afford. Footballers were far from millionaires in those long-ago days, but they took home considerably more than a reporter on a provincial newspaper and they were better than me at three-card brag (particularly Mel Machin, I recall).

At the end of that trip, Peters had another conversation in a hotel foyer. This time it was with me. Discreetly, he asked me if I was all right. I think he was offering to recompense me for my losses, but he was so careful to leave my pride intact that, all these years later, I’m still not entirely sure. The point was, he’d noticed and understood what was going on in that card game and responded humanely.

From then on, I stuck to reading library books on those interminable journeys. That led to considerable ribbing, but it left my meagre supply of Long John in my pocket.

So that was Peters the man: no airs and graces, ready to talk to anyone who wanted to talk to him, hugely empathetic about others.

He wasn’t an unblemished paragon. None of us is. There was an episode when he was manager of Sheffield United when Ken Brown, by then in charge at Norwich, believed Peters had made overtures about taking over at Carrow Road. Typically of both men, it did no lasting damage to their friendship.

How crushingly sad, then, that Alzheimer’s has claimed Peters two months after it took Duncan Forbes. The vicious cruelness of that disease could not be more starkly illustrated; it eroded the super-fit Forbes and wrecked the mind of Peters, who was the most cerebral footballer to pull on the yellow and green.

The national obituaries must concentrate on what Peters did for England on 30 July 1966, and on landmarks in his career at West Ham and Tottenham. But his five and a half seasons at Norwich were significant too — for him and for our club.

He remained fiercely competitive throughout a stint that began when he was 31. And he relished working with Bond and Brown as they established Little Ole Norwich in the top division by picking locks rather than battering down the doors.

Peters could subdue the ball with a caress but he could also “put his foot in”, and he ran all game — not particularly quickly, it has to be said, but always on the move.

He linked exceptionally well with Phil Boyer, who dropped back from attack to join in build-ups and so pulled defenders about so that there were gaps into which Peters could sneak. Another whose game was embellished by playing alongside Peters was Colin Suggett, with whom he shared an ability to improvise and surprise.

Opponents were definitely often surprised. Peters could change his mind halfway through making a pass, suddenly adapting his body shape or adjusting the contact his foot made with the ball to alter the intent and effect of the delivery.

And there was the famed ability to “ghost” in for goals. When I left Norfolk for Fleet Street, I joked that I was going because I couldn’t find any fresh ways of describing a Peters goal. There was some truth in that, because most of the goals were so similar and so simple: he would arrive in the penalty area unheralded at the precise moment which enabled him to score with an unhindered header or a close-range shot.

But there was genius in that simplicity. It involved an ability to read the game as well as he once noted and acted upon the anxiety of a young reporter gambling on the coach.