Having been in receipt of a German A level for 20 years (and sadly hardly ever using it) you come to realise that the Germans have a word for almost anything and some of these words have started to find their way into our vocabulary. Particularly if your beloved football team are now lovers of all things black, red and yellow.

I’m going to nail my colours firmly to the mast early on. I love Delia, I love Webber and I really love Farke. Heck, I’d even love cousin Tom if I knew what he looked like! I regularly find myself humming ‘FARKE’S on a horse…’ and still hoping we sign Jordan Rhodes. So it’s with a sense of more than frustration that I pen this article.

Rewind back a few years. Alan Irvine has just thumped Reading 7-1 and when quizzed about the managerial vacancy, openly states that ‘he has never applied for a job in his life’. I’m sure most of us gave him a guilty thought or two in respect of the manager’s vacancy. What none of us saw coming was the complete left-field appointment of firstly one Stuart Webber, secondly one Daniel Farke and thirdly a slew of previously unheard of backroom staff and new players (Angus and Hanley aside).

It was a gamble, an experiment, a chance to make a bold statement of intent about the direction of the club we all bleed yellow and green for. As a veteran of 26 years of Championship Manager (I still refuse to call it Football Manager) ripping up a club and starting again is what a lot of us die-hard fans enjoy doing. And to see it playing out in real life at your own club, was the stuff of schoolboy dreams.

This gamble finally spluttered into life in season two. Season one was poor, at times I found it hard to keep the faith, but keep the faith I did. For every Millwall (a) there was a Sheff Utd (a). For every Marley Watkins, there was James Maddison. Yet it was in season two that we suddenly exploded into life (that Cardiff game, possibly soon to be akin to a ‘JFK’ or ‘911’ moment, as in where were you when…).

None of us saw it coming. Not one.

I challenge any of you to find me someone who thought at the commencement of last season that we would win the league. And win it by playing the most superb, graceful, balletic football ever to have graced the hallowed turf. For those of you who say we got promoted too early, there’s never a right or wrong time to go up. You go up and you take your chances. Yes, we are well ahead of schedule and we haven’t thrown money at it, but we are doing it our way and for me that is, without doubt, the best way for the club.

Rhetorical question. What do you want out of football?

Option 3 for me every day. I want to be entertained and I love watching how we play. I have no stomach for a Pulis/Hughton approach. We won’t win every game and we will never ever have the backing that teams like Liverpool have, simply due to geography and global fan base.

I love seeing us play great football and I am a firm believer that if you get the process right, the results will follow. But it’s what’s on the pitch that I enjoy, and enjoy it I am.

So I think Norwich fans could be categorised into the aforementioned German words in the title.

the idea of a state or feeling of warmth, friendliness and good cheer. Other qualities encompassed by the term include coziness, peace of mind and a sense of belonging and well-being.

These are fans who just enjoy being a fan come what may. Promotion, relegation or simply mid-table obscurity. We turn out, we support and whilst constructive criticism is accepted, moaning and whinging is conspicuous by its absence.

the defining spirit or mood of a particular time.

pleasure derived by someone from a particular person’s misfortune.

Those fans who seem, perversely, to take utter enjoyment or delight in any iota of misfortune that befalls us. I stumbled across a post on the PinkUn message board entitled; ‘what makes Farke special then’ and then went on to question what Farke has actually done for us or why he’s so special. Baffling.

And it is with the latter of these that I take umbrage. I’d like to think that no Canary fan would take pleasure in us losing, yet as soon as we look like we are taking a turn for the worse, or results aren’t going our way, then all of these keyboard warriors appear.

In this day and age of needing instant gratification – the success and endeavours of last season, and be under no illusions, NO-ONE saw that coming, are swiftly forgotten. Football, for me, is about entertainment. I want to be entertained. And if that means we don’t win every game (name me a team that ever has) then so be it. I’m loving the ride.

I don’t think we need a change at the top. We are fortunate to have owners who love and care for the club and what a ride it’s been. Four promotions in the last few years coupled with a Wembley visit. For me, superb. 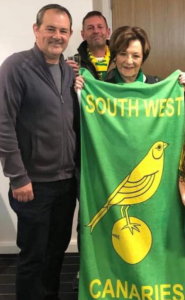 I’d like to pay a quick tribute to South West Canaries with whom I am a fortunate, albeit infrequent attender, of matches. They all radiate such positivity and trek hundreds of miles to follow our beloved club. I rarely, if ever, hear a moan about the club from them.

They all believe the club is in a great place and is run by people with nothing but the club at heart. Some are even doing Newcastle (and back) In a day. Not bad going when you’re starting from Bristol!

And it was a pleasure to hear that they’d been invited to spend some time with Ben Kensell and Delia before the Man Utd game, discussing the membership scheme. The club genuinely values their opinion. I can’t think of many owners who would have offered the same. The SWC even gave Delia a beach towel (which she loved!). The unity between board and fans has surely never been stronger?