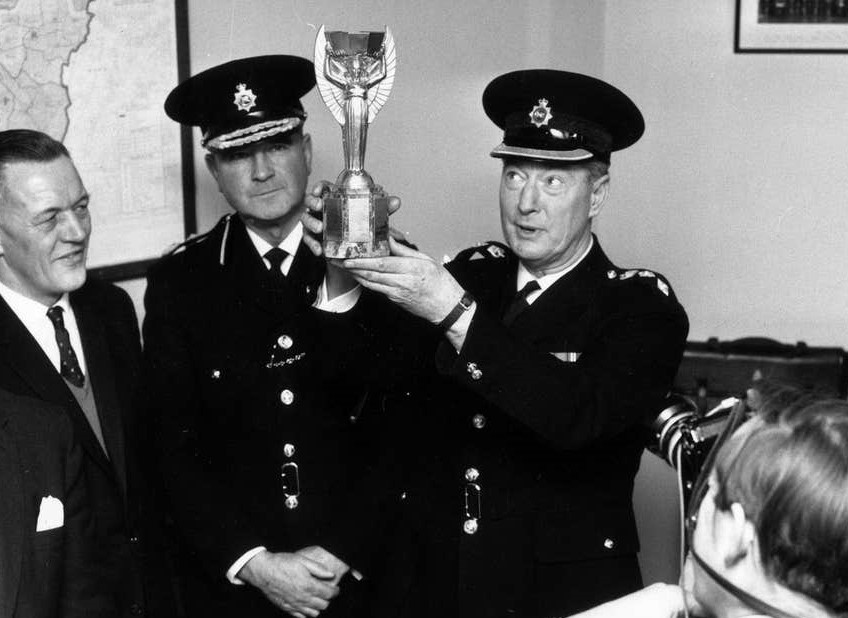 Banks, Stiles, Charlton, Hurst and of course, Peters. Names that roll off the tongue as effortlessly as if they were still playing today. And it’s easy to see why. Because they are amongst a select group of Englishmen to have ever lifted the World Cup.

But it’s a lesser-known Englishman with the same claim, that I wanted to focus on.

William Gilbert. Born 1919, died June 17th, 1995 (incidentally my 15th birthday). A name that I doubt resonates with anyone and why would it?! William ‘Bill’ Gilbert, was Chief Superintendent in the London Met based at Cannon Row Police Station in the 1950s and ‘60s.

“Billy’ as he was known by the lads was a real ‘man’s man’ and always turned out immaculately, always ‘in charge’ but always very approachable and always offered a common-sense solution to whatever confronted us as police officers.

…after retirement from the police service was installed as the ‘Security Tsar’ for the Palace of Westminster, the first-ever, I think?”

It’s amazing what you can find chucked in a bush. Discarded objects, single-use plastic, general detritus and on occasion, the Jules Rimet trophy…

As years go, when an event is as recognisable by simply naming the year it happened, as it is for the event that took place in it, you know something special happened.

1966 is a story that’s as familiar to many as Gazza’s tears, Owen’s goal or Pickford’s saves, on that balmiest of summers. Yet for those who are yet to discover the backstory to our greatest footballing triumph, allow me to briefly indulge you, firstly courtesy of the BBC website:

The football World Cup has been stolen while on exhibition at Central Hall in Westminster, London. The £30,000 solid gold Jules Rimet trophy disappeared while a church service was taking place in another part of the building.

Thieves removed the cup from the “Sport with Stamps” display at the Stampex exhibition, but stamps worth £3m were left behind.

At least two guards were in the hall at the time of the theft. Alsa-Guard, the security firm at the exhibition, was not available for comment.

Vice-chairman of the Football Association Council, Jack Stewart, was reluctant to accept blame for the trophy’s disappearance.

But he said: “We are responsible for it in the end because we are the organizing association.”

Detectives and forensics experts are investigating the break-in and have appealed for anyone who was in Central Hall to contact Scotland Yard.

Police say a suspicious-looking man was seen in the building at the time of the theft. He is described as being in his early 30s, of average height with thin lips, greased black hair and a possible scar on his face.

The Jules Rimet trophy is named after a French lawyer who was a president of FIFA and initiated the World Cup competition in 1929.

But it’s what follows this story that has remained the stuff of legend. The trophy was found on the 27th March, wrapped in newspaper, laying by the front wheel of a car/ in a bush (depending on which newspaper you read) in South London, by the four-year-old dog, Pickles who was being taken for a walk. 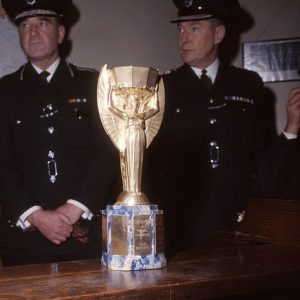 Prior to the discovery, the top of the trophy and a ransom note for £15k appeared at Chelsea football club, sparking a full-scale police investigation, one of the largest in the history of Scotland Yard. Detective Inspector Leonard Buggy had been called in to meet a go-between, Edward Bletchley. However, a deal never took place and to this day the culprits behind the theft have never been caught.

So, quite inadvertently, Pickles found himself catapulted alongside such canine luminaries as Rin Tin Tin, the Labrador in the Dam Busters and of course, Lassie. When England won the World Cup, Pickles (and presumably his owner) were invited to the celebration banquet as a reward. I wonder what he was served…

Sadly, Pickles died a few years later, strangled on his choke collar whilst attached to a tree. His collar now resides in the National Football Museum and there is a blue plaque near to the spot where the trophy was discovered.

The reason for this non-Norwich related article?

Well, it just so happens that William ‘Bill’ Gilbert was my grandfather. And it’s his small role in this story that is oft forgotten. Whenever this story is remembered or churned out on various TV programmes or newspapers, there he is. Always ‘in shot’ yet his name is rarely used or mentioned.

Upon recovery of the trophy, there was understandably a big press conference and my grandfather was responsible for this, along with the safekeeping of the trophy until it could be returned to its rightful place. 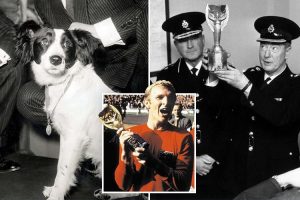 An article was written last year which gave an update to this remarkable story, but in essence, it has come to light that gangland brothers Sidney and Reg Cugullere had pinched the trophy, panicked as they realised they’d have to give it back, before ditching the trophy. They were never caught but did have Jules Rimet shaped floral wreaths at their funerals.

So, rather like Pickles, by a complete quirk of fate, William Gilbert, my grandfather, remains one of only a few Englishmen to ever lift the World Cup. And it is in this picture, that you can see just that.

S to the E@CanaryEllis·
12m