It’s a subject that comes up continually – at least in some quarters – and usually when the brown stuff is hovering near the fan. But not always. Even in the good times, it’s one that simmers away.

It’s normally though when darkness has descended upon the Canary Nation that the words ‘ownership’ and ‘ambition’ score highly in a key-word search of this site’s comments. When a perceived lack of funding from boardroom level aligns itself with poor results (and sometimes performances) on the pitch, it rumbles on.

Some loathe the subject. Some are just tired of talking about it. Some will tell me to stop writing about things that aren’t sugar and spice and all things nice. But it’s not about to go away.

If City are in the second tier, the issue is one of funding a promotion push when up against clubs whose owners have backed their managers, usually to the tune of multi-millions.

When in the Premier League, the issue is slightly different: how to fund a survival campaign by supplementing the ginormous sums of  TV income – which tend to get swallowed up by horrible things like improved contracts and infrastructure – to the point where we can be financially competitive.

That City’s financial clout, at least from boardroom level, is the most modest in the Premier League is not in doubt. A table published before Christmas, supposedly showed our owners’ wealth to be, unsurprisingly, a mere fraction of the Abu Dhabi Group (if nothing else this reminds us what a monumental effort it was for City to beat Sheihk Mansour’s finest back in September).

Said table was based on a piece in The S*n, so the figures are to be taken with a pinch of salt, but for what it’s worth… 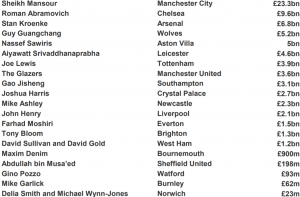 What the article ignored was what proportion of said wealth was spent by the respective owners on their clubs. There was almost an underlying assumption – a ridiculous one – that every dirham, ruble, yuan, dollar or pound of their fortunes are spent on financing their club. But it does give an idea at least of the depth of pocket and, indeed, if it was based on the proportion of owners’ wealth spent on their club, I have a sneaking suspicion we may be top of the pile.

But it also emphasised the need, under this club’s current structure, for it to be self-funding. It’s not a choice.

Others have multi-millions or billions to fall back on to go in search of the dream (FFP notwithstanding). City don’t have that luxury.  Every single pound has to work blo0dy hard. Infinitely harder than at any other Premier League club and, in truth, harder than at least half the Championship.

But that’s our current path: financial stability based on our own version of austerity. And fair play. No-one wants to see this club’s existence ever come into question. We’ve been there and it’s scary. And we’ve watched while some teeter on the brink and others, tragically, go off the cliff edge.

That those in the corridors of power have the club’s stability and future at heart with every decision they make is to be applauded. And the nonsense spoken of it being a platform for the owners to line their own pockets is just that. Complete BS. As is the suggestion that funds are somehow going elsewhere – absolute rubbish. And don’t get me started on “social club”.

But we sighed with relief when Neil Doncaster departed and took with him prudence with ambition. I’d argue we’re now in an era of prudence with limited ambition.

And for many that’s fine. I get that. Totally.

Jon Punt argued it perfectly in ACN’s Delia piece, our Stewart Lewis wrote an MFW piece extolling the virtues of having a long-term plan and sticking to it and a couple of weeks ago Martin MacBlain wrote a fine piece highlighting the qualities of this club and its owners. Even yesterday, Robin Sainty’s EDP column told perfectly the tale of this club’s current finances.

I too love the idea of bucking the trend; of doing it our way; of kicking back against the footballing establishment. Those who know me, know only too well how I love to see the little guy rise up against the elite, go toe-to-toe and, hopefully, give it a blo0dy nose.

I applaud Delia and Michael’s footballing vision of The Good Life (google it, kids) and as the only exponents of self-sufficiency in the top flight – possibly the top two divisions – we have indeed blazed a trail. As our own Mick Dennis tweeted recently, the long-term future of football itself may rely on clubs taking a similar approach.

But – and this is the bit where the grown-ups will tell me off again – in the here and now, whether we like it or not, this approach puts this club at a disadvantage. A massive disadvantage. We’re punching above our weight yet we’re still six points adrift at the bottom of the Premier League.

A medium/long term plan is a rarity in 21st-century top-flight football – the here and now trumps it every time – and that we actually have one sets us apart from the majority, but I remain unconvinced a plan that includes relegation and then promotion is better than a plan that does its best to resist relegation in the first place.

I get that three teams have to go down, and I understand that ‘lots of money = survival’ isn’t a thing, but we have taken it to the extreme.

To have accepted, almost from minute one, that this will probably be a brief stopover en route to, hopefully, doing it all again a season or two’s time, is a little too close to preparing to fail for comfort.

Before anyone reminds me though, I’m acutely aware that failure isn’t part of the plan – quite the opposite – but the one-step-back-two-steps-forward theory is riddled with risk where football is concerned. As I wrote last week… so many variables. Too many variables.

There are obviously too many examples of ‘spend, spend, spend’ ending in disaster for cold hard cash to be the only answer but to have armed Stuart Webber with the smallest Premier League budget known to Man was effectively asking him and Daniel Farke to perform an even bigger miracle than the one they pulled off in 2018/19.

And if Webber and Farke can achieve what they have so far on a wing a prayer, just imagine what they could do with a few quid. Or, put another way, with a budget fit for a Premier League club. A modest budget; a Sheffield United type budget; one that would have enabled the club to bring in three or four players who would have made us better.

I appreciate that money wasn’t there under the existing structure – Robin explained why – but I also think, given the trees Farke and Webber have pulled up over the last eighteen months in the name of Norwich City Football Club, the board owed it to them to pull up a few trees of their own. Even if it did involve having uncomfortable conversations with folk they wouldn’t regard as natural bedfellows.

That Delia and Michael have gone over and above in terms of their generosity is without question, and no-one expects (or should expect) them to blow their hard-earned fortune on keeping this football club afloat. But as custodians, is it not also their duty to ensure this club is the best it can possibly be? And if that ultimately means relinquishing some control in order to help this club grow, should that not at least be on the table?

We are all aware of the potential consequences of selling your soul to the devil and then getting relegated. Again, no-one wants that. And if the only other option is to be self-funded then it’s a no-brainer.

But does it have to be a binary choice?

Those who are about to remind me that Farke and Webber knew the financial score when they signed up to the project are right. They knew, in footballing terms, this would be a hand-to-mouth existence and that there are no magic money trees in NR1 (they only grow in the fertile lands of Westminster) but, as alluded to earlier, if offered the choice of transfer Pot A £5 million, or transfer Pot B £30 million, which would they have preferred?

I refuse to believe Delia and Michael don’t squirm just a little every time either Farke or Webber make reference, when questioned, of the extreme financial limitations they are operating under. They must. I do.

I understand that being Norwich City FC, in the middle of nowhere, doesn’t, on paper, make you a sexy proposition for any would-be investors and there are no NCFC-loving billionaires drifting around the northern part of East Anglia looking for somewhere to spend their piles of used notes. But, equally, I’m not sure Michael and Delia are the only folk out there capable of stewarding this football club.

To paraphrase an MFW colleague, there comes a time when if you love something enough and the best option for that thing (or club) it is for you to move aside then you should do so. Or if not step aside, allow someone (or something) else to come in alongside and play a part.

Right now it feels like the plan is being driven by the owners’ desire not to have to seek external funding, and not necessarily because it’s the best and/or only way.

But I still admire the plan. I also think the plan would work better if it didn’t put the club at such a disadvantage compared to every single competitor. And I’m not comfortable with us being so comfortable at the prospect of relegation.

As much as I detest a lot of what the Premier League stands for, it’s the only place to be. Otherwise… why? And I don’t think it’s unreasonable to debate why we took austerity to a new level last summer.

What a way to get you into the right mindset away from home. Brilliant 👏🏻 #ncfc

@Arsenal live at 12:15 & @NorwichCityFC live at 15:00 both in the @EmiratesFACup (best domestic cup competition in world football) followed by @AVFCOfficial at 20:00 in the @premierleague (best league in the world) fantastic day of football

🤕 Injuries | Covid | Cup tied | Work permit
🗣 "We want to be as successful as possible in the FA Cup."
👀 Cauley Woodrow