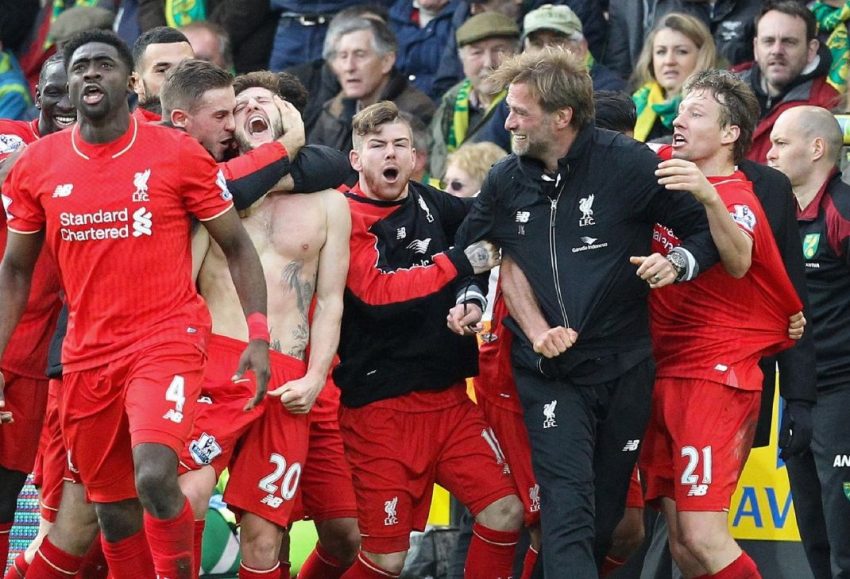 I’d hate for anyone to think ‘One from the Archives’ is a new feature, designed specifically to fill the MFW pages on a day that would otherwise be void of fresh content (as if…), but I can see that those of a cynical disposition may interpret it that way.

I’d rather look at it as an excuse for a little trip down memory lane, one that will appeal to those for whom nostalgia is what it used to be.

So, first up, an offering from yours truly, penned in the wake of that infamous 5-4 defeat by Liverpool, which also happens to be their last trip to the old place.

Keep your eyes peeled for, amongst other things, the oddity of praise for Steven Naismith, some familiar musings of defensive fragility, an equally familiar refrain around Russ’ s unsuitability at centre-back and a description of Liverpool as ‘toothless’. Weird.

Not since 30 April 1994, when Jerry Goss scored the final goal in front of the old Kop for a 1-0 win, have City beaten Liverpool.

That’s nearly 22 years of hurt… and it really does hurt when, for that length of time, you’re forced to withstand that unique ‘Scouse sense of humour’ – just as we did yesterday when it was 0-1, 3-4 and 4-5 etc.

But, in truth, a few cheeky and whiny jibes are the least of our problems after one of the craziest 95 minutes I can ever recall. Crazy but not in a good way. And not just crazy, also infuriating, exasperating, depressing, deflating and bewildering. Hell, it was so ridiculous there was even a bit of encouragement hidden in there somewhere

Like most others of a yellow persuasion, seldom can I recall departing the old place in such a state of shock. Anger was rife among those departing the scene of the crime and it was one that was practically impossible to fathom. So many questions…

How can we score four goals at home and not win the game?

How can this Liverpool side put five past us?

Why do we consistently self destruct?

Why don’t we stick it in ‘row Z’ occasionally?

Why do we concede so many late goals?

Why was Ryan Bennett dropped?

And, yes, why does the gaffer think his captain can play at centre-back?

The answers to the final two were offered by Alex Neil post-match, with Russell Martin getting the nod ahead of Bennett because the manager felt his qualities more suited to quell the threat of Firmino. But the sight of Firmino 18′, 63′ in the match stats tells you it was the wrong decision, even putting aside the obvious individual howlers.

Of course, Alex didn’t benefit from hindsight but still, there were few among the Yellow Army who yesterday would have made the call he did, regardless of the combination of strikers we were likely to face. It was brave – I’ll give him that – but it was an error of judgement.

If nothing else it should organically call time on the Martin at centre-back experiment, which has gone on far too long, if only to remove the skipper from the firing line.

[It’s worthy of note that the Tinkerman himself, Claudio Ranieri, trusts the Robert Huth and Wes Morgan pairing to cope with all the Premier League can throw at them regardless of whether it’s the guile of Aguero or the aerial prowess of Andy Carroll.]

Russ is clearly a decent, likeable chap who will be as shell-shocked by the events of yesterday as anyone but while he’s undeserving of some of the vile abuse hurled in his direction, neither does he deserve another chance in the centre of City’s defence.

But it was not just about individual errors – it was also about how the Canaries defended as a team and how effortlessly the visitors were able to create chances. Not so much a soft centre, more a sickly, foul-tasting liqueur.

At the risk of repeating myself, to concede five against the most toothless Liverpool side I can ever recall is hard to take, and hard to comprehend.

The void left by Alex Tettey’s illness was an all-too-obvious part of the problem but with neither Jonny Howson or Graham Dorrans natural ‘sitters’ it was more than a little surprising that Youssouf Mulumbu was not given the nod.

City’s inherent defensive frailties mean a shield at the base of the midfield is an absolute must and for Mulumbu not to get the call yesterday makes you wonder when he ever will.

I’ve been a fan of Dorrans in the recent past (unlike most it seems) for his tendency to pass to those in yellow shirts but there is no escaping his inability to sit deep and track midfield runners was costly yesterday. And now, with Steven Whittaker nowhere to be seen, I fear he’s close to joining Russ at the top of the unwritten hit-list. I hope I’m wrong.

But equally, it’s a given that the return to health of Alex Tettey and the return from suspension of Gary O’Neil can’t come quick enough as the cluster of teams at the bottom the Prem becomes ever more concertinaed.

As it transpired the failure of those around us to win yesterday meant the damage was limited but by the same score, it was a chance missed to put clear water between us and the bottom six. And it’s too early to gauge the longer-term psychological impact of yesterday’s five minutes of injury-time, which in the short term was horribly traumatic.

Hopefully the nine days between now and the visit of Tottenham – high-flying Tottenham no less – will be used to clear the heads and, amongst other things, to get Master Klose up to speed because with around five wins still needed a quick glance at the remaining fixtures makes difficult reading.

But there were some obvious positives to cling to and, in part thanks to Messrs Sherwood and Wright on MotD, it was fitting that defeat in a nine-goal thriller didn’t detract from a fine Steven Naismith debut. He was everything we hoped, and had been promised, and it was no coincidence that with an ally close at hand Dieumerci Mbokani had his best game in yellow so far.

Ivo Pinto too showed signs of promise although he will quickly learn, and be told, that to be a regular full-back in the Premier League he will need to be as assured defensively as he is in the attacking third. But he did enough in the first hour to suggest this is achievable, in the same way, the whole team did enough for 55 minutes to suggest they can retain their PL status.

But it’s a thin line City are treading right now and their propensity to self-destruct, which has been ongoing since the first game of the season, shows no sign of abating. Either it stops now or we can all starting preparing for Deepdale and Elland Road.