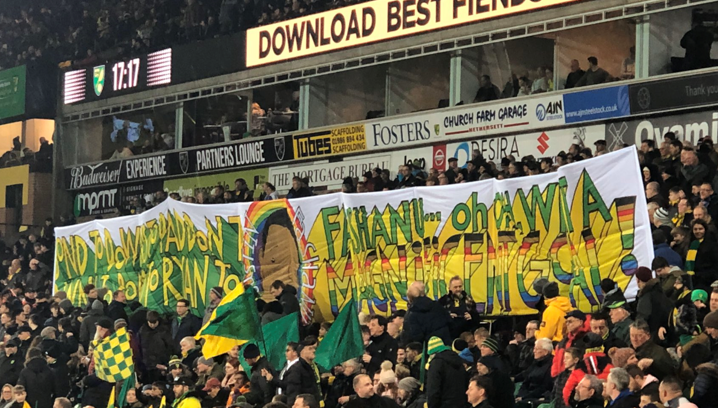 Well, if you can’t be proud of that what can you be proud of? Considering the value of Virgil van Dijk alone would outstrip that of our entire squad quite literally twice over, we gave it a right good go and so nearly held out the Champions League winners who have only dropped two points all season after 26 games.

Dennis did its best to deliver the very worst of conditions but that notwithstanding the game was just as gripping as I had hoped for.

That Liverpool’s constant press eventually wore us down was, I guess, inevitable but we held our heads high and got forward in style when we could. Alisson’s superb save from the combination of Lukas Rupp and Teemu Pukki was matched by Tim Krul’s double from Mo Salah and Naby Keita.

I realise you probably weren’t there to watch our Tim, Mr Koeman, but take note nonetheless.

The subtle little push on Zimbo from Sadio Mane didn’t look VAR worthy to me. It’s part and parcel of the game and those are very rarely given in any case. Of course, VAR was obliged to check it but the outcome was always inevitable.

You have to feel for Sam Byram as if that’s a serious hamstring then his season is over. On a positive note, Jamal Lewis looked like he’d never been away when he came on. And well done to whoever decided to treat Byram on the pitch as the Reds had built up a real head of steam at that point and we got a couple of minutes of respite from it. Someone’s learning the dark arts, it would seem.

And in terms of learning, Grant Hanley and Kenny McLean [despite one almighty first half balls-up] seem to be getting better all the time which is just as well as they’ll both surely be lynchpins next season.

That fixture was a free hit anyway and we must have collectively gained even more belief and confidence from it despite the defeat.

Just a personal couple of views from my perch in the Barclay: yes there were a few disgruntled types in E block who were chanting anti-Farke stuff but I think it was specific to their wanting Emi Buendia on the second we went behind. Sorry guys that’s the Head Coach’s decision, not yours.

They kicked off Emi’s song when he did come on and the discontent seemed to dissipate as quickly as it started.

The tribute banner to Justin Fashanu’s goal all those years ago was a great idea from whoever thought of it. No wonder it was located in the River End – it would have become lost in the yellow and green sea that is currently the Barclay.

I rarely say this because we’ve had some right dodgy officials over the years, but I thought referee Stuart Attwell had a great game.

So now it’s on to Wolves with a team to be proud of – and with good reason.

If Daniel’s “little miracle” is to happen the process must begin on Sunday.

I thought I’d end with a couple of gripes about merchandising and “supporter packages” at NCFC.

But there’s nonetheless a big smiley moment at the very finish to counteract my moans.

When I saw that Tampa Bay Rowdies shirt with the Hard Rock Hotel logo on it I thought, shucks – I’ve got to have one of these and I’ll snap said item up before the Liverpool game. Coolest top I’ve seen since the Asics ones with the green diagonals on the right breast in the late 1980s.

Obviously the Rowdies have strong links to ourselves and a couple of our under-23s have been loaned to them. No treachery, no shame in wearing their colours as they are identical to ours. How could I go wrong?

The shame is this: NCFC wants £78.50 for one of these. That’s right, seventy-eight pounds and fifty pence. Even with ten per cent off on my season ticket that would still cost over SEVENTY quid.

We all know the shirts [whether courtesy of Errea or not] are made in Asia for a unit cost of much less than a fiver, so who are our merch crew trying to con?

Count me out, as dapper as the top is.

Then there’s the mascot experience manifestation which shocked me even more.

As our very own Robin Sainty quite rightly said on Archant the other day, the Club has to make money any way it can.

But when I found out that for a child mascot to walk out at Carrow Road costs £379 I fell off my chair and forgot to feed the dogs.

When I’d been licked almost to death to remind me of my dereliction of duty and scraped myself off the laminate I revisited the source and discovered it was £500 for a child to walk out with the captain of the day.

So what chance does the average working man or woman have of allowing their child or grandchild to enjoy that experience?

I can’t genuinely plead poverty but even so, I’d baulk at that amount of outlay, I really would.

However, we’re not all bad when it comes to shirts.

My oldest and best NCFC mate Keith King and I first met in the River End over 30 years ago. He turned 80 the other day and his granddaughter Anna works regularly in the programme section at Carrow Road although her full-time job is at Sprowston Tesco.

She told the Club that grandad had been a fan at the Carra since 1946 and much more about him. He’s had his season ticket for far longer than me and we have sat within nattering distance in the Barclay for well over 25 years since moving from the River End. We’ve exchanged lots of moans [I mean banter] and when Anna was a tiny, three generations of Kings were Barclay regulars until mum Jen moved to Essex.

Keith and Anna were invited for a special pre-match meal on Saturday where he was presented with a shirt with ‘Keith 80’ on the back and signed by the first-team squad. I believe it was presented to him by Ben Kensell.

It was so precious to Keith that he wouldn’t take the shirt out of the bag in a heaving Barclay to let me take a pic.

But he showed me it and it had been signed in indelible pen over 20 times.

When NCFC get it right, they really do.